Why lockdown is best option for Kenya now

Commentary
From the experience of others, we should have a total lockdown and flatten the curve 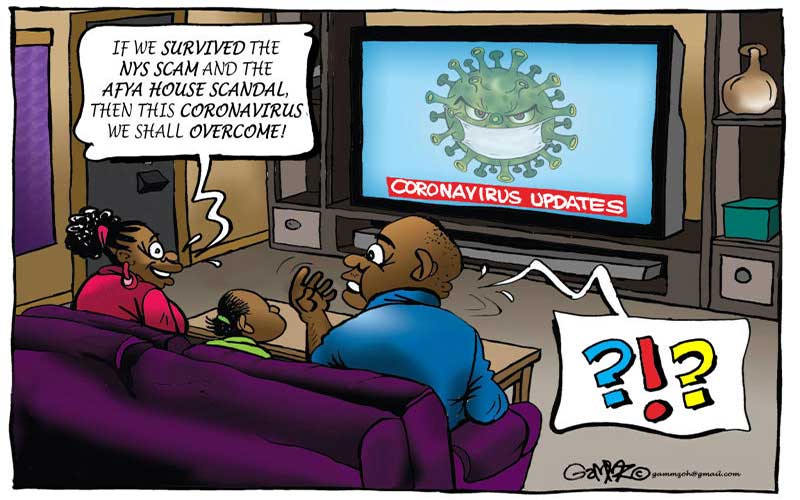 The Covid-19 coronavirus epidemic is not the first of its kind. A quick look at the history of the past provides lessons on what works or doesn’t, and how we ought to act to end this one. One of the earliest recorded epidemics was the Justinian plague (AD 541) that resulted in 30-50 million deaths in Europe, North Africa and Arabia. Constantinople, the capital of the Byzantine empire, was totally decimated before the pandemic ran its course. The epidemic ended when there were no more people to be infected for those who survived had immunity. The black death which affected Europe and the near East had a fatality rate (proportion of those who die among those who are sick) of 20-80 per cent resulting in 200 million deaths; one-third to one-half of Europeans in four years (1340s). The observation that proximity of people had something to do with transmission resulted in the idea of isolation of travellers for up to 40 days; “quarantino”.

The Great Plague of London in 1665 resulted in the death of 20 per cent of Londoners in just seven months. This epidemic was fuelled by rumours, myths and misinformation for despite laws on isolation, initial focus was the killing of dogs and cats. By the time public meetings were banned, entertainment places closed and the sick locked up in their homes, the plague had resulted in 100,000 deaths. The smallpox epidemic of the 15th Century in the Americas was one of the most vicious. Although smallpox was endemic in Europe and people were mostly immune, travellers to the Americas exposed the immunologically naïve people to the infection resulting in dissemination of over 90 per cent of the population. This epidemic was an early example of the effect of global travel in pandemics (epidemic of global proportions). The London cholera epidemic of the 1850s, however, is the most important in respect to understanding transmission and developing public health strategies for control. With short incubation periods and high fatality rates, cholera brought London to its knees as the dead accumulated among the dying. Doubting the theory that cholera was caused by bad air, a doctor and a priest studied hospital records and mortuary reports and observed that the homes of the infected clustered around an area served by a particular well. Convinced of the relationship between the well and the infection, removal of the handle of the pump rendered the well unusable thus breaking the transmission cycle of the water-borne cholera. The more recent Spanish flu of 1918 has major similarities with the Covid-19 coronavirus. It is claimed that it started in China and by the time it spread to Europe, Americas and Africa, it had mutated to a more severe form. It is estimated that 3-6 per cent of the global population perished from this pandemic. Improved transportation systems during the first World War fuelled the transmission of the Spanish flu that killed more people in 24 weeks than the HIV epidemic did in 24 years. All these epidemics and the more recent ones of HIV, Ebola, SARS and Avian flu have confirmed that control of epidemics depends on understanding the pathogen and its transmission. This is followed by three strategies: identifying and treating the sick, isolating the infected including the non-symptomatic ones, and preventing transfer of the pathogen to the uninfected.

We know that the Covid-19 is a virus transmitted through contact or droplets though the eyes, nose or mouth. The practice of identification of the infected by taking temperatures is neither specific nor adequate, for the 5-14 days between infection and symptoms mean that people early in infection who may not be running a temperature can transmit it. More effective methods are available such as mass blood tests of a substantive proportion of the population sampled accordingly.  Treating the sick involves intensive in-patient care that supports the body to overcome the infection and rebuild immunity. This requires adequate medical workers who are trained, prepared, committed and motivated to work in well-resourced hospitals for long hours. These requirements may not be adequately met and thus the situation reported recently in Kakamega. Our focus should be on adequate training, protection and motivation of medical care workers to enable them to perform optimally. Isolation requires physical separation of the infected and those suspected of being infected from the non-infected for as long as there is risk of transmission. Our focus of washing hands, sanitising and maintaining a social distance are good as a long as there is strict compliance. There always is a disconnect between knowledge, attitude and practice. We know of the coronavirus, how it is transmitted and what we should do. Human nature, however, has poor compliance unless there is a motivation or a sanction. No wonder we still hear discussions of whether churches and markets should be opened and what would be the economic effect of people not going to work. An epidemic has three phases; the rise, peak and decline of cases. As evidenced by history, a decline is realised when the virus mutates and is no longer infective to humans; all vulnerable people are dead or immune, or when transmission is stopped. Epidemiological modelling talks about “flattening the curve” referring to reducing the number of people infected by the time the epidemic reached the peak. An example of two Italian cities equidistance north-east and south-east of Milan that have reached the peak of the epidemic can provide learning opportunities.  Bergamo took the route of half-way measures; self-isolation, recommended working from home and within three weeks the epidemic peaked at 2,300 cases. The city of Lodi, however, chose extreme measures and took the route of total enforced mandatory lockdown early in the course of the epidemic and had 1,100 cases at the peak.

All evidence available suggests that Covid-19 epidemic in Kenya has not yet reached the peak. Let’s be honest and expect increased numbers of those infected before we can see a decline. What we have today are the primary cases; those that brought the virus from outside the country. With an up to 14 day incubation period, we expect a major increase due to manifestations of symptoms in secondary cases -- the multiple contacts of the primary cases. After this it’s an exponential increase as in doubling of numbers every few days. This is what has happened elsewhere and will probably happen here. We have lost precious time and opportunity. All the suspected contacts of patient zero as well as passengers of flights from China should have been quarantined (not self-isolated). We have allowed people unrestricted travel and many have travelled upcountry believing that their villages are safe from the virus. Assuming Nairobi is the epicentre, they will have been exposed and some infected transporting the virus to the counties and increasing the number of epicentres. We however still have a window of opportunity. The focus should be to flatten the curve; reduce the number of people infected by the time the epidemic reaches a peak, declines and blows over. Kama ni mbaya ni mbaya. Half measures of self-isolation, voluntary testing, suggestions and recommendations will not do. Let’s accept it; we will have a lockdown. Our only choice is if it will be now or later. Learning from the experience of others, let’s have a total lockdown now and flatten the curve. Considerations of the economy, the stock exchange, the performance of the dollar and politics are all collateral damage. This is a matter of life and death and we can deal with these others later when the epidemic is over and our people are safe.