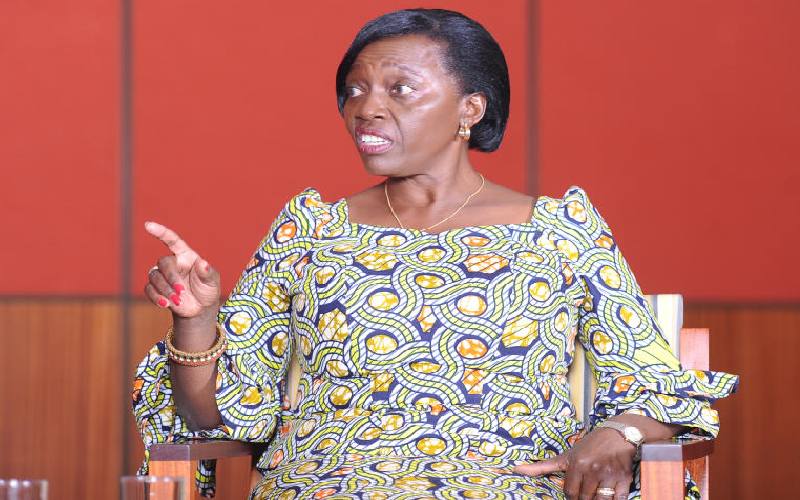 Narc Kenya leader Martha Karua (pictured) now want the government to shut Kenya’s airspace and suspend all flights from China to curb the spread of the dreaded coronavirus into the country. Addressing the media on Friday at the party’s offices, Karua slammed the government over what she described as reckless mishandling of the global outbreak of the virus. She blamed the government for exposing the 48 million Kenyans to the risk of contracting the virus even after admitting that the Ministry of Health is not prepared to handle the disease.

“The government is talking about a paltry 11 beds (testing and monitoring) for the whole country for the dreaded disease yet there is no proper monitoring at border entry points and at the Jomo Kenyatta International Airport (JKIA),” she said. She warned that  Kenya risk being the epicentre of the virus if the government continue to allow flights from China in and out of the country. “With this careless, Kenya might soon become the epicetre of the virus, resulting in many other airlines suspending flights to JKIA,” said Karua. The former Justice minister wondered why the government has refused to bring back Kenyans especially students stranded in Wuhan, China, saying they might transport the disease into the country yet it has allowed Chinese nationals to come in and go out of the country at will. “The state has failed to bring back Kenyans stranded in Wuhan yet hundreds of Chinese nationals are allowed to come in and mingle with Kenyans,” she said.

She accused the government of failing to protect its citizens abroad and here at home by failing to bring back students stranded in China and at the same time opening our airspace for everyone. “State refused to bring back Kenyans from China to Kenya, and is now failing to protect us here at home especially students in Wuhan to be flown home.” Karua now wants the government to organise and fiancé the evacuation of Kenyans in China and once here quarantine them for monitoring. Self-quarantine Karua also took offence with the government’s advisory to the Chinses nationals to quarantine themselves for 14 days before freely mingling with Kenyans, saying it was only laughable but also tragic.

The recent advisory for the 239 candidates by the government to self-quarantine is laughable and tragic.” She faulted China’s decision to allow hundreds of Chinese citizens to get in and out of Kenya without adequate health checks and/or quarantine. “Without prejudice to China, the decision to allow flights to Kenya despite the outbreak is ill-advised and should be suspended,” she said.