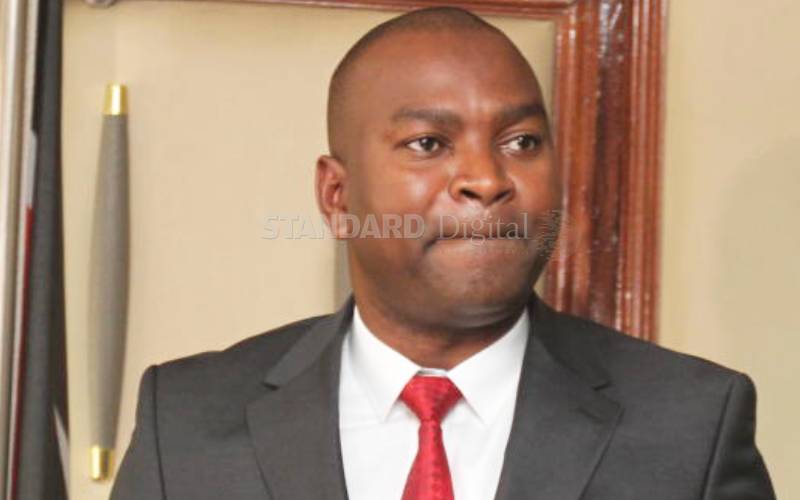 Former Sports Cabinet Secretary Rashid Echesa (pictured) has denied forgery charges in a case involving an alleged fraudulent arms deal. Echesa appeared before JKIA Chief Magistrate Lucas Onyina on Friday, where his lawyers denied documents related to the Sh39 billion case were recovered in his car. The prosecution asked the court to hold the former CS for 21 days as detectives travel to the US to check the documents' authenticity. But his defense team questioned the application, saying Echesa's offence does not warrant staying in detention for 21 days. The case revolves around a fake tender deal to supply the government with military surveillance equipment, guns, and ammunition. His arrest followed a complaint by two gun dealers who claimed he had swindled them Sh11.5 million they had paid as ‘consultancy fees’. They claimed the former CS had promised to use his influence to help them secure the multi-billion shilling security tender. Echesa was arrested alongside Daniel Otieno Omondi, Kennedy Oyoo Mboya and Clifford Okoth. It also emerged that one of the American merchants keen to win the tender to supply guns and ammunition had been hosted by the former CS at Harambee House Annex Building, where Deputy President has his office. Police yesterday visited the building and recovered copies of the documents that Echesa had allegedly given to the investors. Detectives from the Special Service Unit arrested Echesa on the road in Nairobi, handcuffed him and drove him to the DCI headquarters for questioning. The foreigners were also present for questioning. Tenders to supply firearms and ammunition are usually floated by respective departments, which include the Department of Defence, for the military, and the Ministry of Interior for police, prisons and the Kenya Wildlife Service. Echesa's lawyers further argued that the case was politically instigated. He was arrested on Thursday and taken to the Directorate of Criminal Investigations (DCI) headquarters along Kiambu Road. Echesa was fired in March last year when President Uhuru Kenyatta reorganised his power axis to achieve his Big Four legacy dream. Before his sacking, Echesa was under fire at the ministry with various graft scandals emerging and national teams constantly complaining of being under-funded. In May last year, the former Sports CS was arrested alongside Kakamega Senator Cleophas Malala over killings by a criminal gang which left 18 people dead in Matungu, Kakamega County.