I have nothing personal against Ruto, Raila says

Politics
He, however, says he is concerned with Ruto’s source of wealth, especially the money he dishes out at fundraisers 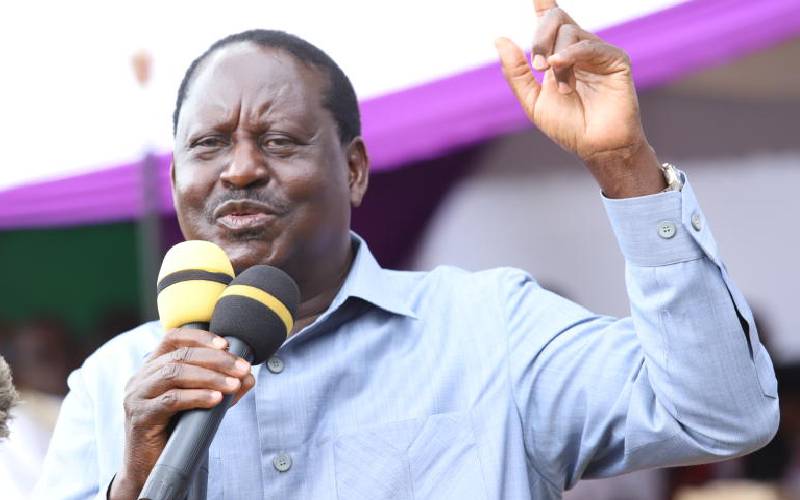 Opposition leader Raila Odinga (pictured) has said he has no problem with Deputy President William Ruto being elected president in 2022. In an interview on Sunday at his Karen home, Raila said he had no issue with Dr Ruto as an individual. He said if Kenyans voted freely and endorsed Ruto for president, he would abide by such a democratic decision.

“If the people of Kenya decide to elect him president, I have no problem. Who am I to interfere with Kenyans exercising their democratic mandate?” Raila said. The former prime minister, however, stressed that questions had been raised about Ruto’s wealth, especially the cash he dished out in harambees. Raila said that is what concerned him. Raila asserted that he and former President Mwai Kibaki banned harambees because they thought they compromised the electorate and blurred the line between voter fraud and fair electoral processes. Faulted ruto The ODM leader faulted Ruto for reviving the fundraisers. He described the source of money the deputy president dishes out as “dubious”.

“I have no issues with Ruto. I don’t hate him as a person. The problem started when he resurrected public donations, which Kibaki and I had banned,” said Raila. He insisted that while serving as the prime minister, he decided to sack Ruto from the Agriculture docket purely because of integrity queries that faced the latter. Raila said a report from PricewaterhouseCoopers (PWC) implicated Ruto in a maize scandal, and which could not be ignored. “I only suspended him to pave way for investigations into the maize scandal. Ruto was among my team of negotiators during the formation of the coalition government,” Raila said, adding: “The other camp had told me they did not want him in government, but I told them they could not dictate to me who I chose.” Raila opined that a public servant was not supposed to conduct business with State organs. “What kind of businesses does the deputy president own? It is embarrassing of him to drag the president’s name in those donations by making claims that he has been sent to present donations on behalf of the President. That is a lie,” he said.

Raila explained that the truce between him and Uhuru was a result of talks initiated by “Good Samaritans”. He dismissed claims that before his “handshake” with Uhuru, he had approached Ruto, asking him for a political truce. Good samaritans “Some Good Samaritans initiated talks that bore the handshake. I was shocked when Ruto said I approached him. I swear I never reached out to Ruto in 2017 for a handshake deal between Uhuru and I,” Raila said. He added that he denounced the oath he took, swearing himself into office as the “People’s President” immediately after the handshake.

On Building Bridges initiative, the ODM party leader said the task-force was working on a water tight document that would result in electoral reforms. “We have to put the interests of the country first. BBI will get rid of the political hypocrisy,” Raila said.