Trump under pressure in 2nd week of impeachment hearings 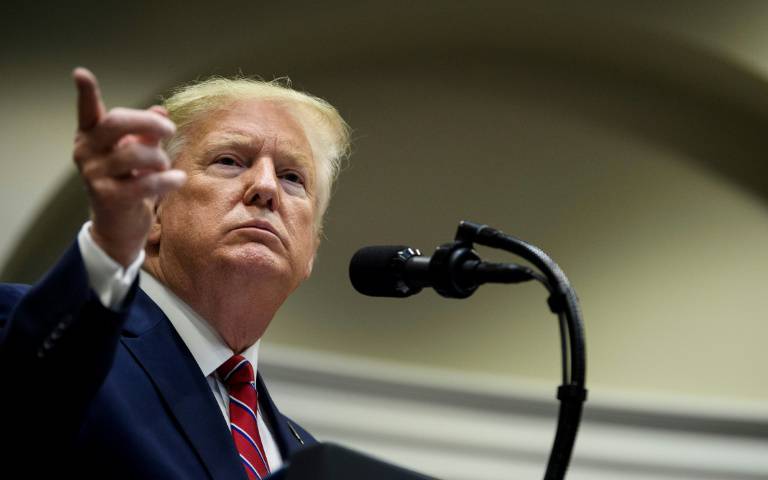 President Donald Trump (pictured) faces more potentially damning testimony in the Ukraine scandal as a critical week of public impeachment hearings opens Tuesday in the House of Representatives. Trump's suggestion that he might himself testify in the investigation which threatens his presidency had no impact on the House Intelligence Committee's plans to interview nine witnesses this week. Most significantly, they include Gordon Sondland, the US ambassador to the European Union, who allegedly transmitted to the Ukraine government Trump's demands for help in finding dirt on his Democratic rivals ahead of next year's presidential election.

The hearings also include diplomats who have already testified privately that Trump and Sondland repeatedly pushed Kiev to open investigations into Democrat Joe Biden -- Trump's potential 2020 reelection challenger -- and withheld nearly $400 million in aid and a White House meeting requested by Ukraine President Volodymyr Zelensky as pressure. House leader Nancy Pelosi said Monday in a letter to fellow Democrats that Trump engaged in "extortion and bribery." "The facts are uncontested: that the president abused his power for his own personal, political benefit, at the expense of our national security interests," she said. - Trump could testify in writing - Trump, who faces becoming only the third president in US history to be impeached, tweeted early Monday that he is "strongly" considering testifying to defend himself against allegations that he abused his powers in seeking foreign help for the 2020 election.

He tweeted that Pelosi suggested "that I testify about the phony Impeachment Witch Hunt." "She also said I could do it in writing," he said. "Even though I did nothing wrong, and don't like giving credibility to this No Due Process Hoax, I like the idea & will, in order to get Congress focused again, strongly consider it!" Pundits were skeptical and said the likelihood of Trump following through was low, but there were no other signals one way or another from the White House and Congress. In Special Counsel Robert Mueller's investigation into whether Trump's 2016 campaign colluded with Russia, Trump hinted early on that he would testify and then stalled for months before answering written questions.

Even so, his lawyers negotiated strict limits on what kind of questions could be put, and in dozens of instances, Trump said he could not "recall" the facts. - Rising impeachment support - Democrats signalled they would plow ahead with the inquiry, scheduling nine witnesses this week. On Tuesday morning the Intelligence Committee will hear from Jennifer Williams, an advisor to Vice President Mike Pence, and Alexander Vindman, a Ukraine expert on the National Security Council. Both listened in on Trump's key July 25 phone call with Zelensky, in which the US leader pressured his counterpart to launch investigations into Biden and a wholly unsupported theory that Kiev aided Democrats in the 2016 race. In the afternoon Kurt Volker, the former special US envoy to Ukraine, and National Security Council official Timothy Morrison will testify. Conceivably this week could wrap up the Democrats' investigation and see them prepare the evidence collected to send to the House Judiciary Committee to draw up articles of impeachment. Democrats have also demanded testimony from several senior White House and State department officials, especially Trump's chief of staff Mick Mulvaney, who personally discussed Ukraine policy with Trump, and have also subpoenaed internal records. But so far the White House has refused to let them testify and release the records. Rather than engaging in a long court battle to force the testimony, Democrats have suggested they will simply consider adding obstruction of the investigation to the charges against Trump and push ahead toward a vote on impeachment by the full House. That would likely pass the Democrat-controlled House, to place Trump on trial in the Senate, where a Republican majority could protect him from removal. But with presidential and congressional elections now less than one year away, much depends on politics and public sentiment. An ABC-Ipsos poll released Monday showed a bare majority of Americans, 51 percent, believe Trump should be impeached and removed from office, up from around 48 percent in polls before last week's initial public testimony in Congress. The poll suggested as well a drop in the number of people opposing impeachment, to 38 percent, below the previous average of about 46 percent.