Aisha Jumwa: I am still with DP William Ruto

Malindi Member of Parliament Aisha Jumwa surprisingly declared her support for ODM parliamentary seat candidate in Kibra by-election. Jumwa, who is an ardent supporter of Deputy President William Ruto, attended ODM Parliamentary Group meeting chaired by their party leader Raila Odinga and declared her support for Bernard Imran Okoth. However later at an event where Jubilee's Kibra candidate McDonald Mariga was meeting a delegation from Kibra, the Malindi MP said that she had not ditched DP Ruto's camp and that her preferred candidate for the forthcoming by-election was still Mariga.  Aisha Jumwa is always in the frontline of the Tanga Tanga movement and spearheading the Inua Mama campaign, a counterforce to the pro-Uhuru-Raila Embrace Kenya.

In the dizzying twist of events before her latest declaration, Jumwa had said that her ‘DNA is ODM and ODM is her home.’ In an SMS Raila Odinga’s spokesman Dennis Onyango confirmed earlier development to the Standard Digital. 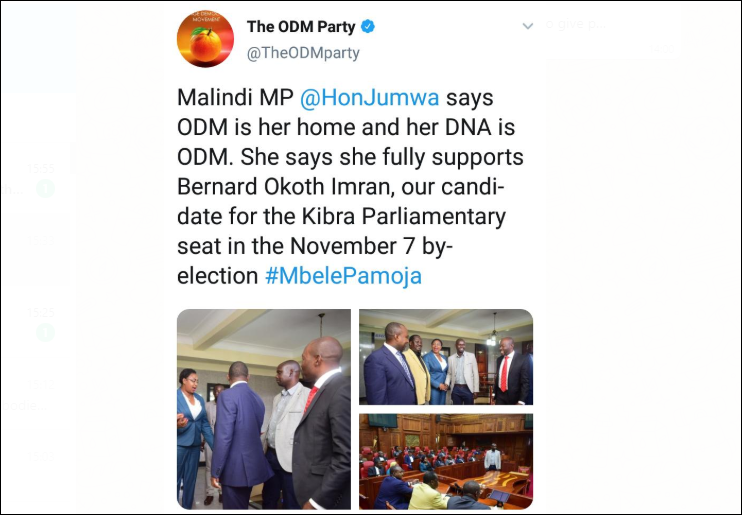 Strangely, the ODM tweet announcing the defection was deleted moments after it was posted.