Nine Kiambu MCAs have applied to be enjoined in the Sh588 million corruption case against their suspended Governor Ferdinand Waititu.

The MCAs, through lawyer Ndungu Gathinji, argued that they represent thousands of Kiambu residents, who are victims of the alleged corruption committed by their governor and want to join the case as interested parties.

But Waititu’s lawyers led by Mbiyu Kamau opposed the application, saying the MCAs only want to derail the case by turning it into a political contest.

According to Kamau, they don’t understand how the MCAs' participation in a criminal case will aid in delivery of justice.

“We will not allow the case to become a political contest instead of a legal process. Their interest has not been disclosed and there are questions whether they have any reasonable grounds to be joined as interested parties,” said Kamau.

Anti-corruption court chief magistrate Lawrence Mugambi directed the MCAs to make a formal application and serve the accused persons to also make formal responses before he decides whether to allow their participation.

This came up during the mention of the case where Waititu, his wife Susan Wangari Ndun’gu, former Kiambu County Chief Officer for Roads Luka Mwangi Waihinya, businessman Charles Chege, his wife Beth Wangeci and six suspended county employees are charged with corruption.

The charges stated that the scandal started in February 26, 2018, when Chege and his wife, through their company Testimony Enterprises, presented fake certificates to Kiambu county tender committee to prove that their company was capable of undertaking roads construction work.

They then submitted the bid for construction of a road to Kiambu County’s tender committee which had Zacharia Mbugua, Joyce Ngina, Simon Kang’ethe, Anslem Wanjiku and Samuel Muigai as members.

The committee sat on March 5, 2018, and approved the company’s bid without subjecting it to scrutiny, which led to them being charged with wilful failure to comply with the law relating to procurement.

According to the charge sheet, the five illegally introduced new criteria for evaluating the tender for upgrading various roads to favour Testimony Enterprises.

On March 16, 2018, Waihinya was accused of using his office to approve and confer a benefit of Sh588,198,328 to Testimony Enterprises by awarding the contract to upgrade the roads when the company had no such capacity.

The prosecution claimed some cash was channelled to Waititu and his wife as kickbacks through their companies Saika Two Estates Ltd and Benvenue Delta Hotel.

The magistrate gave defence lawyers seven days to collect documents to be relied on by the prosecution and scheduled September 27 for pre-trial session. 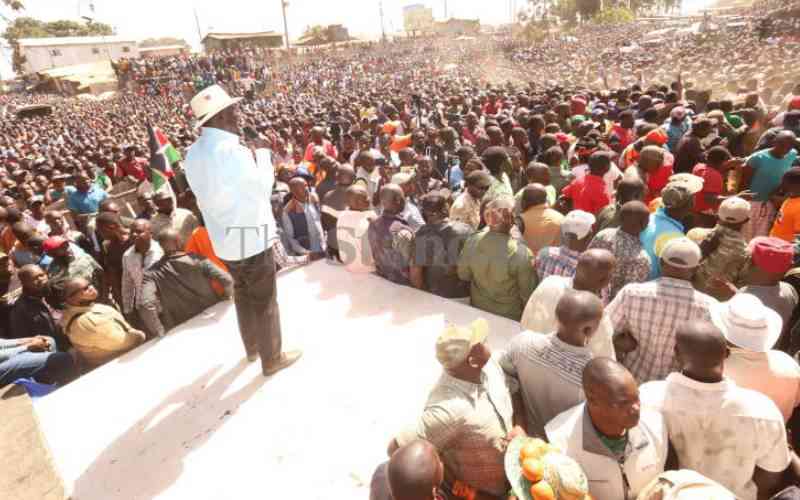 By Edwin Nyarangi 35 mins ago
Premium Is Raila creating an exit window out of Azimio? ODM say no!
.