US Embassy in Tanzania issues security alert for citizens

Africa
The BBC reported that police chief Simon Sirro said he was aware of the rumours and the police are following them up.

The United States embassy in Tanzania has issued a security alert to its citizen over fears of impending attacks in a tourist area in Dar es Salaam. In a Twitter post, the embassy said: “There are rumours of impending attacks in the Masaki area of Dar es Salaam specifically at hotels and restaurant frequented by tourist, and at Slipways shopping center on the Msasani Peninsula.” “The embassy has no sustaining evidence of the threat or information on the timing, but nonetheless warns citizens to take the precautions outlined.” 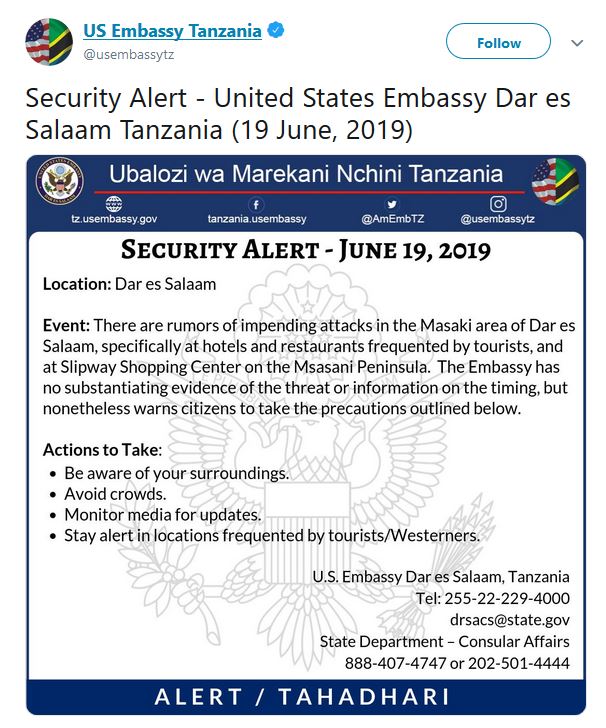 The BBC reported that police chief Simon Sirro said he was aware of the rumours and the police are following them up. "It’s news like any other news, it might be true or false, but we don't ignore it," he told BBC Swahili. Al-Quaeda carried out Tanzania's deadliest attack when it bombed the U.S. Embassy building in Dar es Salaam in the August 1998 killing 11 people. The U.S. Embassy in Nairobi was targeted by the group on the same day in a near simultaneous attack.