Nairobi
At Pangani, a motorist died after his car hit the underpass wall. 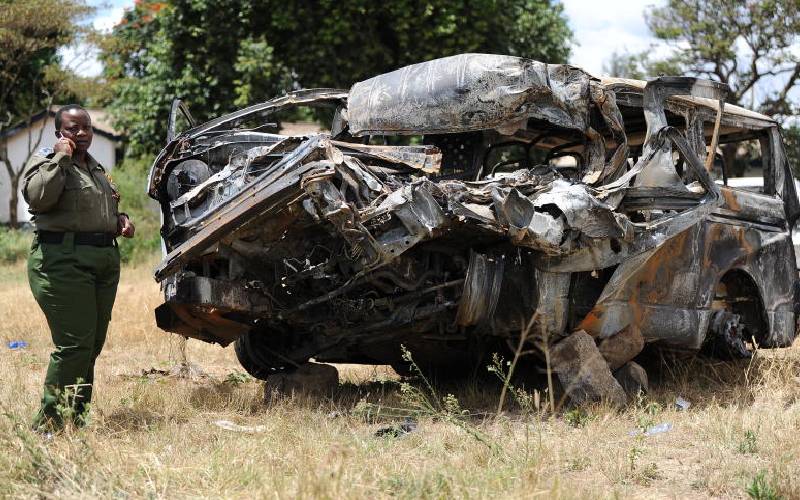 At least nine people were killed in separate accidents over the Easter holiday, authorities have reported. In the Sunday horror crash at a car racing event in Arusha, one of those killed has been identified as a nephew of Kirinyaga Woman Rep Purity Ngirici. The man, identified only as Robin, and a friend died when two vehicles collided at Oldonyo Sambu near the Arusha-Longido border in Tanzania.

Ngirici posted a tribute to her nephew on Twitter yesterday. “The cruel hand of death has snatched my beloved nephew Robin who perished in the Arusha Namanga accident. Robin was a young man of virtue. I recall with nostalgia his passion for everything his mind set to do,” wrote the legislator. “He was a sociable, bubbly gentleman who like any other young person had great dreams for his future. Rest in eternal peace my dear nephew. You will be fondly missed.” The other victim has not yet been identified. Arusha Regional Police Commander Jonathan Shama told local media the accident involved two saloon cars — a Toyota and a Mitsubishi.

Elsewhere, two people were burnt beyond recognition when their car rammed a truck and burst into flames on the Thika Superhighway at dawn yesterday. The accident happened at 1.30am at Juja City Mall, just a few metres from Juja shopping centre. Juja OCPD Dorothy Migarusha said the Totoya Townace, which was heading to Thika, hit a trailer and rolled several times before catching fire. The vehicle was thrown from the express lane to the service lane where it burst into flames. “The fire was very fierce and the two occupants were burnt beyond recognition. The victims have not been identified,” said the OCPD.

The wreckage was towed to Juja Police Station. A witness said the two men were from Maragwa in Murang’a County. James Mwangi, who had travelled from Maragwa, said he knew them but declined to give their names. “I know them, they are from Mbombo village in Maragwa. It is very sad that they lost their lives in such a painful way,” said Mwangi. The two are said to have driven back to Nairobi some visitors who had gone home for Easter holiday. “They were on their way back to Maragwa,” said Mwangi. A man said to be the owner of the vehicle declined to speak to the media at Juja Police Station. Other accidents were reported in Kakamega, Pangani in Nairobi and Chogoria, Tharaka Nithi County. Among those killed was Lumakanda Police Station Deputy OCS Charles Mureithi. His driver was seriously injured after a police vehicle they were in was involved in an accident on the Webuye-Eldoret highway. Police said the driver of the other vehicle died on the spot. The accident happened yesterday morning at about 3am. At Pangani, a motorist died after his car hit the underpass wall. The car had Tanzanian registration numbers. Witnesses said the driver lost control of the vehicle as he joined Wangari Mathai Road from Thika Road. In Chogoria, two family members died and seven others were injured following an accident on the Meru-Nairobi highway. Police said the injured were in stable condition in hospital. The accidents happened as the National Transport and Safety Authority and police continued with a campaign to ensure safety on the roads. National police head of traffic operations Leonard Katana said the campaign had worked well despite the accidents reported. He said during Easter in 2016, there were 26 deaths from road accidents, 36 in 2017 and 37 last year. “The campaign will continue to ensure our roads are clean and safe,” said Katana.

How to steer your thoughts towards positivity and rebirth