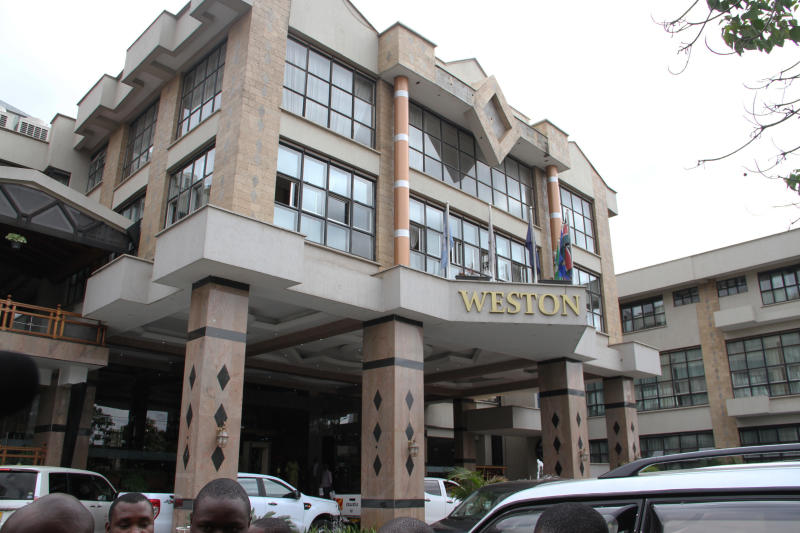 The National Land Commission (NLC) meets today to make a crucial determination that will seal the fate of Weston Hotel land. Already, a draft report has been prepared recommending that title for Weston Hotel, associated with Deputy President William Ruto, be revoked. The commission will meet either to adopt the report or amend it before notifying parties to the matter, which include the Kenya Civil Aviation Authority (KCAA) and Weston.

If the report is adopted in its draft form, and members append their signatures, then Ruto will lose the land and will only be left with an option of turning to the High Court for appeal. Should the NLC rule in favour of Weston, the KCAA will also have an option of challenging the decision in court. “The fact is that the land belongs to KCAA. That is what we established. But let’s wait for the commission meeting on Thursday,” a senior official of NLC told The Standard on Tuesday evening. Commission vice chair Abigail Mbagaya will chair the meeting, given that Muhammad Swazuri, the chairman, is barred by a court order from participating in the commission's meetings due the corruption case he is facing. Yesterday, Ms Mbagaya declined to comment on the verdict, saying we should be patient. “When a decision is made, we shall make it public. Be patient,” she said.

The NLC boss, however, insisted that the issue of Weston Hotel land was among many matters that had to be determined before the term of the current NLC could expire in February next year. There has also been fear that any decision arrived at by the NLC in the absence of the chairman might have its legality challenged, though Mbagaya stated otherwise. “Read the law. In the absence of the chairman, who conducts meetings of the commission? Is it not the vice chairperson?” she posed. The number of members NLC requires to attain a quorum is at least five, being the simple majority, to make any binding decision. Other members, other than Mbagaya, are Abdulkadir Khalif, Clement Lenachuru, Emma Muthoni Njogu, Dr Rose Musyoka, Dr Samuel Tororei, Silas Kinoti and Dr Tomiik Konyimbih.

In October during public hearings, Ruto defended his acquisition of the land on Lang'ata road, saying he had bought it legitimately. The DP has already acquired Sh1.3 billion loan using the title of the land. Ruto, his wife Rachel Chebet Kimeto and daughter Charlene Chelagat Ruto are listed as directors of Weston Hotel Limited. Ruto, through lawyer Ahmednasir Abdullahi, denied irregularly acquiring the land, saying no one had ever claimed the property since he acquired it and that even during the hotel's construction, he did not receive any complaint from the State or any individual. He said he acquired the land in 2007 for Sh10 million from its registered owners, Priority Management Ltd and Monene investments limited. Priority Management Ltd and Monene Investments Limited had been allocated the parcel measuring 0.7 hactres or (1.7 acres) on January 5, 1998 for a period of 99 years to develop residential flats and apartments after paying a Stand Premium of Sh320,000.

The two firms got the title for the land in 2002 before transferring it to Weston Hotel on June 13, 2007. Weston then applied for change of user, which was approved. Ahmednasir told NLC: “Our client is a bona fide purchaser for value. If there is any defect on the title, our client was not aware of it. The allottee has a valid grant obtained from the Government, on which the transfer to our client was endorsed.” But KCAA told NLC a powerful cartel operating in the Lands ministry in cahoots with its own officers conspired to relinquish the land for an alternative one in Embakasi. “The KCAA management and the board has never consented, agreed, relinquished or surrendered nor ceded the plot by way of sale, transfer, gifting or otherwise given it to any person,” KCAA’s lawyer Cyril Wayong’o said.  Documents provided by KCAA to NLC indicated that the agency, then known as Directorate of Civil Aviation (DCA) under the East African Community, used the land for its stores.

On June 29, 1999, the Commissioner of Lands asked the DCA to comment on an application to build a church on the land.