By Peter Muiruri | 5yrs ago 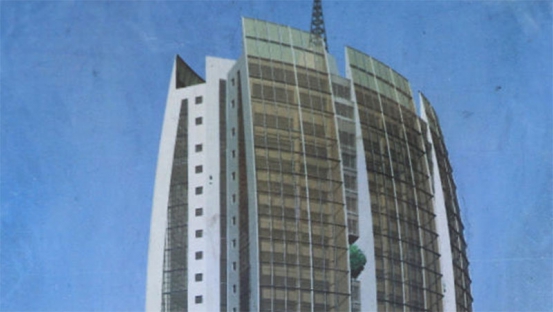 When David Mutiso in March officially opened the Architectural Association of Kenya’s (AAK) new offices at Blue Violets Plaza on Kindaruma Road, Nairobi, he donned his trademark bow tie and wore a big smile. At 84, Mutiso is one of the first African architects. He had been invited to open the new offices as part of the celebrations to mark the association’s Golden Jubilee.

His wit and sharp recollection of the country’s architectural journey over the 50 years puts him a cut above the rest of his peers. Mutiso is the architect behind some of the iconic structures in the city, including the Kenyatta International Convention Centre (KICC). Although built using public funds, KICC was initially constructed to house the then ruling party, Kanu.

“Kanu wanted a head office but had no money then even to pay for an architect,” says Mutiso, the first African chief architect at the Ministry of Public Works.

Tom Mboya, the then Kanu secretary general, had approached Mutiso with a simple request: to design a four-storey office block. President Jomo Kenyatta soon took over the preparatory stage after which the design was changed to the current form.

“The president wanted a building that would be the face of Kenya to showcase our newfound freedom. From then on, I was now getting briefs from the president every Monday at his house in Gatundu,” he says.

Work on the 28-storey building started in 1967 and the building was opened in 1973. It is the only building in Nairobi’s central business district (CBD) with a helipad accessible to the public.

The building, which for decades was the tallest in Kenya and the East African region, was constructed using gravel, sand, cement and wood, basic materials readily available in the country.

It has stood the test of time in an era where much shorter buildings constructed out of similar materials – and in an era of more technological advancement – are tumbling down due to shoddy workmanship and poor technical supervision.

The founding president’s influence on the city’s skyline started much earlier. In 1961, two years before Kenya became independent, the Ministry of Public Works had completed what was meant to be its headquarters on the then Coronation Street.

It was outside this building that Kenyatta, as the new prime minister, led the nation in a ceremony to usher in internal self-rule on June 1, 1963. But Kenyatta saw more than the crowds and the choreographed parades. He saw a well-designed building that merited to be the office of the future president.

“He said he wanted it to be his office. What were we supposed to do? We took the same design and built a replica of Harambee House in Community. It is the Public Works Building,” says Mutiso.

During the 1970s and early 1980s, Mutiso worked on Buruburu Estate that was one the best-designed residential estates in Kenya before it became a chaotic conglomeration of extensions.

But if Mutiso was a great architect, he was only walking in the footsteps of giants. While his name is synonymous with KICC, few today know the exploits of one Amyas Connell. The co-founder of Triad Architects is the brains behind other notable buildings in the city that have also stood the test of time.

Connell’s works include Parliament Buildings and the Attorney General’s chambers. To show how much British influence had on Nairobi’s early architecture, the colonial administrators had instructed Amyas to ensure that the new legislative building mimicked the palaces of Westminster.

That is the reason Parliament Buildings has a clock tower that was once the tallest structure in the city. A similar design is seen at City Hall, which was built in 1957.

Francis Gichuhi of A4Architects says that the British mode of construction was meant to last for more than 50 years were it not for the country’s independence that brought their march to a halt.

“The British had envisioned a much greater stay within the Kenyan colony. It looks like the 1963 Uhuru was premature to them since they had not factored in this into their architectural planning,” says Gichuhi.

Gichuhi says our architecture has “matured” in that we no longer have to copy the colonial styles but are now using modern conventional and radical styles.

“Unfortunately, with rapid urbanisation in most parts of Africa and zoning regulations are changing rapidly, hence no much need to design buildings that last over 50 years. Upper Hill, for example, bears little semblance to the colonial style homes that sat on large spaces,” he says.

According to professionals in the built industry, the first two decades after independence were the “glorious” years of architecture in Kenya. Most of the buildings constructed during this period continue to stand the test of time in terms of functionality and aesthetics.

“Look at Parliament Buildings, Sheria House, Office of the President, former Shell/BP now housing the deputy president as well as a number of buildings at the University of Nairobi. They were all constructed with the local climate in mind,” says Musau Kimeu, one of the leading environmental architects in the region.

Sadly, Kimeu says that during and after the 1980s, what we have are tall edifices that are least responsive to climate needs.

Emma Miloyo, AAK president, says the built environment has come a long way since the profession was established in May 1967. Still, she says, we may be coming up with beautiful buildings but failing the ecosystem.

“Our values have gone down. What we are seeing are taller and taller buildings, both in the residential and commercial sectors but very little green spaces for people to enjoy a healthier lifestyle,” she says.

In recent years, Kenya seems to be in a race to conquer the skies with the tallest structures on the continent. Last May, President Uhuru Kenyatta laid the foundation stone for the 70-storey Pinnacle Towers in Upper Hill, Nairobi. When completed, Pinnacle will dislodge Carlton Centre in Johannesburg, South Africa, as Africa’s tallest building.

IEBC to announce presidential election winner at 3pm
National
By Mate Tongola
10 mins ago
Interested in the rabbit business? You do not need a lot of money
Livestock
By Dr Paul Kang’ethe
51 mins ago
Reasons why you can't keep a man
Relationships
By Esther Muchene
1 hr ago
Ten Hag discovering the mess he has inherited at Man United
Football
By Associated Press
1 hr ago
.

By Peter Theuri 4 days ago
Premium Nairobi: The city of haves and have-nots stuck in colonial times