By Titus Oteba | 7yrs ago 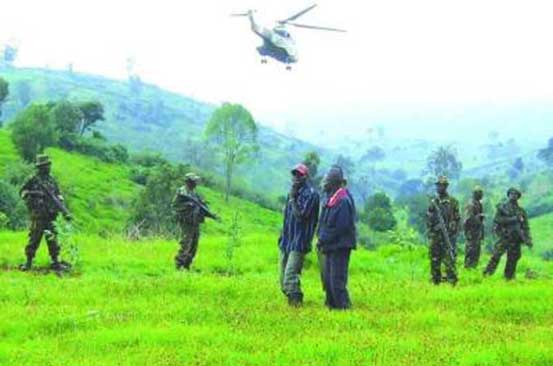 BUNGOMA: Chepyuk Settlement Scheme was established in 1971 to settle the Sabaot, who had been pushed out of their lands by the British in colonial Kenya.

To date, an estimated 160,000 inhabitants live in the southern part of the scheme, which is more fertile and habitable compared to the northern part that is almost entirely covered by forests.

Although the population at the scheme is multi-ethnic, the Sabaot, who are the original beneficiaries, dominate and account for more than 60 per cent of Mt Elgon

The Sabaot in Mt Elgon Constituency — part of the larger Kalenjin community — who inhabit Chepyuk are dominated by four clans: the Bok, Someek,Koony and the Mosopisyeek (also called the Ndorobo).

The Bok and Someek settled on the lower slopes (also called Soy) in the southern and eastern part of the district and are mainly agro-pastoralists.

In numbers, the Ndorobo, who are mainly hunters and gatherers, account for about 20 per cent of the Sabaot. The Bok, Someek and Koony make up the remaining 80 per cent.

In the mid-1960s, the government established a plan to resettle the Ndorobo to protect them from recurring attacks from communities living in Uganda. The resettlement was also an olive branch to a community that for decades had been at the periphery of state inclusion.

The land to which they had been pushed into upon the creation of white highlands was remote and only accessible by foot through large swathes of forest. Besides, the area was a gazetted water catchment the state was keen to protect.

As a result, the Ndorobo were moved further south towards the area inhabited by the Bok, Someek and Koony. In 1971 the government begun the first resettlement process, called Chepyuk Phase I (1971 -1974).

But poor preparations, lack of title deeds and corruption led to dissatisfaction among the Ndorobo and envy from the other three clans, forcing the government to announce a second resettlement plan in 1989, the Chepyuk Phase Two.

The population continued to grow, forcing the State to open Chepyuk Phase Three in Emia location to resettle 1,732 families in 2011.

Despite the resettlement efforts, land issues in the scheme are still emotive and are the cause of sporadic violence and ejections of perceived outsiders.

“Sabaot Land Defence Force (SLDF) was borne out of skewed division of land in the controversial Chepyuk scheme.

The government must give residents title deeds so they can also feel honoured,” said Cheptais division peace chairman Richard Sangula.

Tiger on the loose in South Africa successfully captured
News
By AP
10 mins ago
Parenting dilemma: Adult children who won't move out
Lifestyle
By Peter Muiruri
54 mins ago
Man stealing panties: What you need to understand about fetishes
Living
By Eve Waruingi
1 hr ago
Cyprus picks new president amid economic doubt, ethnic split
Asia
By AP
1 hr ago
.