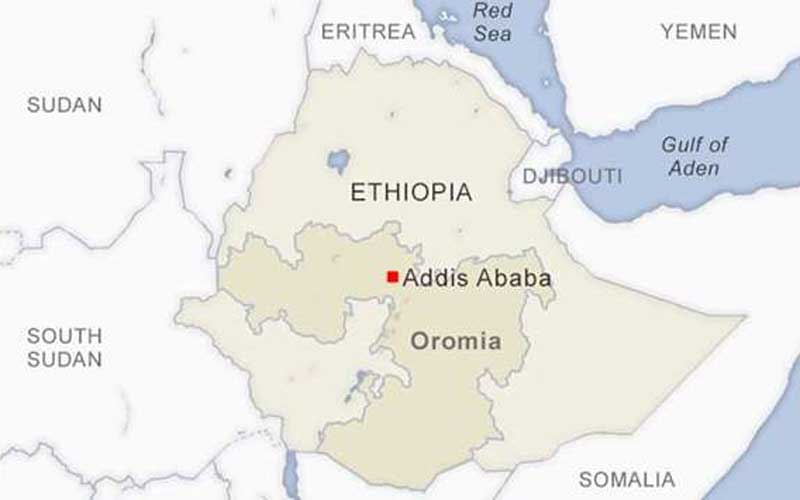 An armed group in Ethiopia's restive Oromia region has killed at least 32 civilians in a weekend "massacre", the national rights body said Monday, adding that the toll could rise.

The incident -- which Amnesty International said left 54 dead -- is likely to ramp up pressure on Prime Minister Abiy Ahmed, winner of last year's Nobel Peace Prize, to improve security in a country struggling with ethnic bloodshed.

The violence erupted Sunday in an area of western Ethiopia known as Wollega and involved up to 60 "armed and unarmed assailants", according to a statement from the state-affiliated but independent Ethiopian Human Rights Commission (EHRC).

It said the assailants targeted members of the Amhara ethnic group, Ethiopia's second largest, and that victims "were dragged from their homes and taken to a school, where they were killed".
"Official figures state a death toll of 32 civilians, but preliminary evidence obtained by EHRC indicate the number is very likely to exceed that tally," the statement said.

Earlier Monday, the Oromia regional government said the attackers belonged to the Oromo Liberation Army (OLA), an armed group blamed for kidnappings and bomb attacks in western and southern Ethiopia.

A survivor from Wollega who spoke by phone to AFP said Sunday's violence erupted after security forces stationed in the area abruptly and inexplicably left, allowing OLA fighters to round up civilians.

"After collecting us, they opened fire on us, and then afterwards looted cattle and burnt down houses," said the survivor, who spoke on condition of anonymity for safety reasons.
"I have counted more than 50 corpses, and I know there were others hit by bullets," the survivor said.

The EHRC called on authorities to investigate why the military withdrew from the area.
"These gruesome killings of civilians are unconscionable and flout basic principles of humanity," said Daniel Bekele, the head of the commission.

"No amount of grievance can justify such brutality, and perpetrators should be held to account."
Amnesty also called for a probe.

"This senseless attack is the latest in a series of killings in the country in which members of ethnic minorities have been deliberately targeted," said Deprose Muchena, Amnesty's director for east and southern Africa.

"The fact that this horrendous incident occurred shortly after government troops abruptly withdrew from the area in unexplained circumstances raises questions that must be answered."

The OLA, believed to number in the low thousands, broke off from the Oromo Liberation Front (OLF), an opposition party that spent years in exile but was allowed to return to Ethiopia after Abiy took office in 2018.

Separate attacks on Amhara civilians have recently been reported in two other regions.

Dessalegn Chanie, a senior member of NAMA, said Monday that "up to 200 Amharas were ruthlessly murdered" in Sunday's attack, though he acknowledged the precise toll was difficult to pin down.

"According to survivors from the area whom I talked to earlier today, they are not sure about the count of deaths because they just ran" into the forest, he said.

In a statement Monday afternoon, Abiy said security forces had been deployed to the area and were "undertaking measures" to restore order.