Beirut reels from huge blast, as death toll climbs to at least 100- Photos

Lebanese rescue workers dug through rubble on Wednesday looking for survivors after a massive warehouse explosion sent a devastating blast wave across Beirut, killing at least 100 people and injuring nearly 4,000.

Officials said the toll was expected to rise after the blast at port warehouses that stored highly explosive material. The explosion was the most powerful ever to rip through Beirut, a city still scarred by civil war three decades ago and reeling from an economic meltdown and a surge in coronavirus infections.

President Michel Aoun said 2,750 tonnes of ammonium nitrate, used in fertilisers and bombs, had been stored for six years at the port without safety measures. He called it “unacceptable”.

An official source familiar with preliminary investigations blamed the incident on negligence. Ordinary Lebanese directed anger at politicians who have overseen decades of state corruption and bad governance that plunged the nation into financial crisis.

“It’s like a war zone. I’m speechless,” Beirut’s mayor, Jamal Itani, told Reuters while inspecting damage he estimated ran into billions of dollars. “This is a catastrophe for Beirut and Lebanon.” 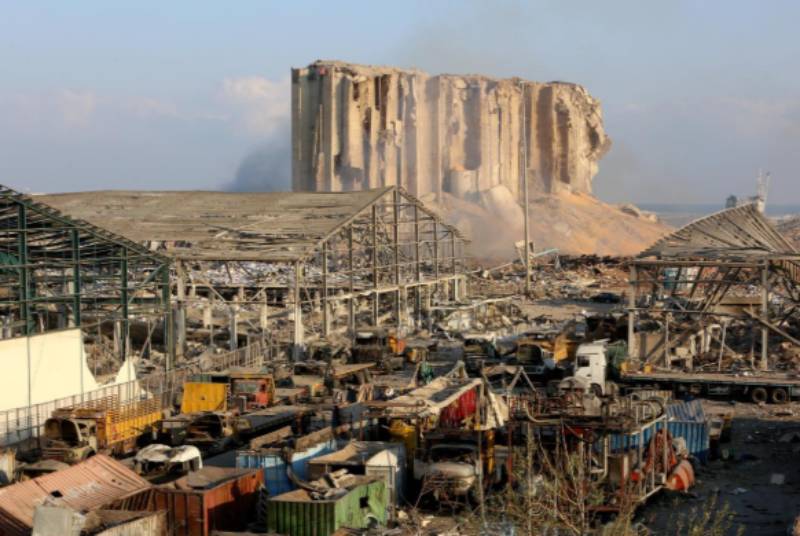 The head of Lebanon’s Red Cross, George Kettani, said at least 100 people had been killed. “We are still sweeping the area. There could still be victims. I hope not,” he said.

The intensity of the blast threw victims into the sea and rescue teams were still trying to recover bodies. Many of those killed were port and custom employees and people working in the area or driving through during rush hour.

The Red Cross was coordinating with the Health Ministry to set up morgues because hospitals were overwhelmed, Kettani said.

Facades of central Beirut buildings were ripped off, furniture was sucked into streets and roads were strewn with glass and debris. Cars near the port were flipped over.

People walked around in shock, with helicopters overhead and teams searching for the missing at sea.

“This is the killer blow for Beirut, we are a disaster zone. My building shuddered, I thought it was an earthquake,” said Bilal, a man in his 60s, in the downtown area. 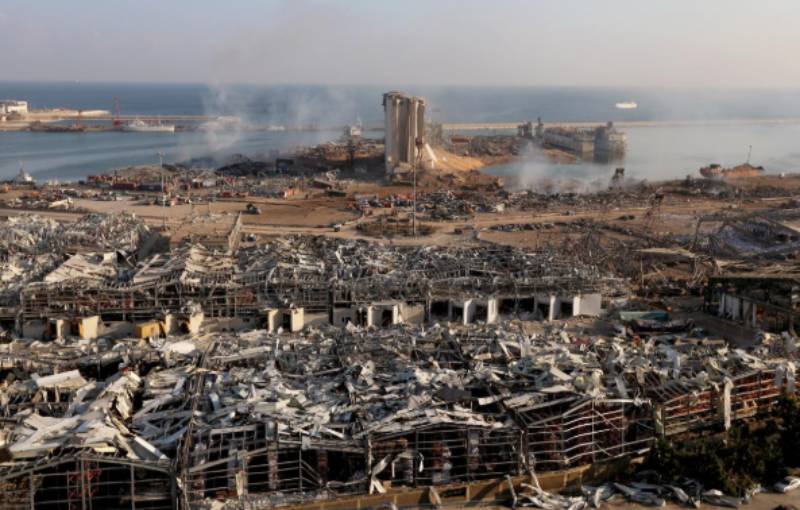 Like others, he blamed politicians. “We already have a financial economic crisis, people are hungry and, these thieves and looters, will they compensate for the losses? Who will compenstate for those who lost their loved ones,” he said.

Hassan Zaiter, 32, a manager at the heavily damaged Le Gray Hotel in downtown Beirut, said: “This explosion seals the collapse of Lebanon. I really blame the ruling class.” 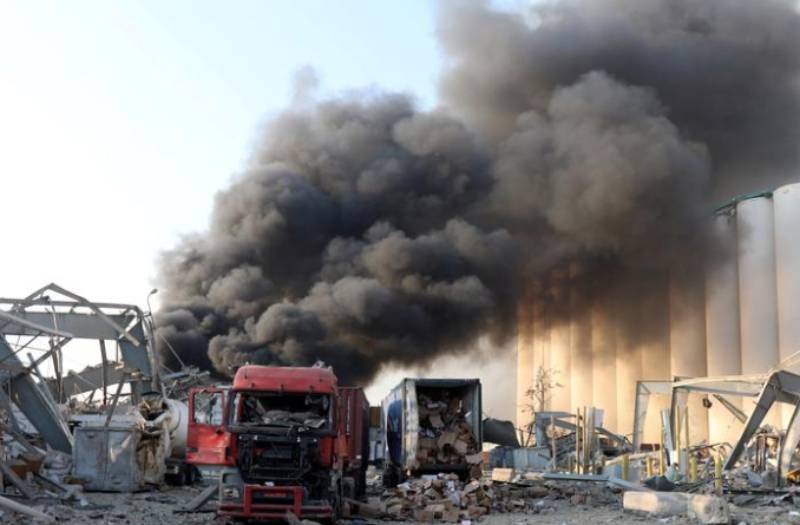 For many it was a dreadful reminder of the 1975 to 1990 civil war that ripped the nation apart and destroyed swathes of Beirut, much of which had been rebuilt. Post-war reconstruction and political corruption mired Lebanon in huge debts.

“With this blast they took us back to the years of war ... Our leaders are in a coma,” said Ali Abdulwahed, 46, a manager at Café de l’Etoile, a restaurant next to parliament.

Prime Minister Hassan Diab promised accountability for the blast at the “dangerous warehouse”, adding “those responsible will pay the price”.

Officials did not say what caused the blaze that set off the blast. A security source and media said it was started by welding work being carried out on a hole in the warehouse.

The blast was heard as far away as Cyprus, a Mediterranean island about 100 miles (160 km) across the sea from Beirut. 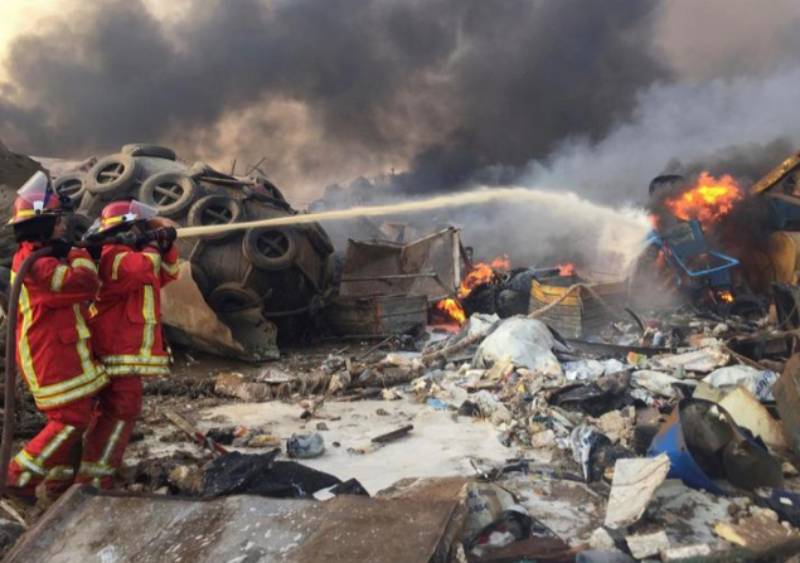 The port district was left a tangled wreck, disabling the nation’s main route for imports needed to feed a nation of more than 6 million people. Lebanon has already been struggling to house and feed hundreds of thousands of refugees from Syria.

“The blast blew me metres away. I was in a daze and was all covered in blood. It brought back the vision of another explosion I witnessed against the U.S. embassy in 1983,” said Huda Baroudi, a Beirut designer.

The U.S. embassy in Beirut, which moved to another part of the city after the 1983 attack, warned residents about reports of toxic gases released by the blast, urging people to stay indoors and wear masks.

Footage of the explosion posted on social media showed a column of smoke rising from the port, followed by an enormous blast, sending a white mushroom cloud and fireball into the sky. Those filming the incident from tower blocks as far as 2 km (one mile) from the port were thrown backwards by the shockwave. 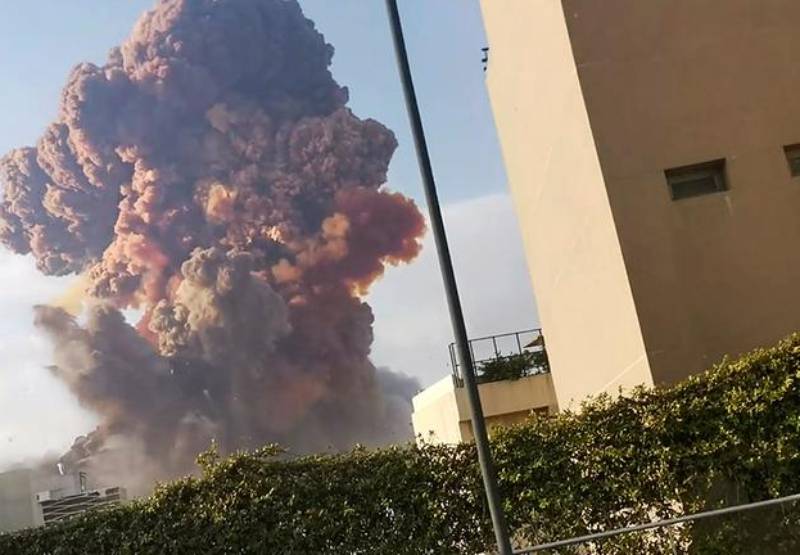 The explosion came three days before a U.N.-backed court is due to deliver a verdict in the trial of four suspects from the Shi’ite Muslim group Hezbollah over a 2005 bombing that killed former Prime Minister Rafik al-Hariri and 21 others.

Hariri was killed by a huge truck bomb on the same waterfront, about 2 km (about one mile) from the port.