Scheme to sink Mudavadi flops as Oparanya, Eugene made to eat humble pie

Mudavadi’s political star also got a boost following his party’s win in the recent Matungu by-election.

Raila in fresh bid to work with One Kenya Alliance

The spokesman post is crucial in the region’s efforts to field and rally behind a single presidential candidate and for bargaining power with other parties as leaders from the area scheme to be in next government.

Last year, Wamalwa and Oparanya had joined hands in a bid to dislodge Mudavadi as the region’s spokesperson.

But the move now appears to have crumbled, with Mudavadi appearing to tighten his grip on the region’s politics.

Political pundits agree that Mudavadi appears to have stopped Wamalwa and Oparanya in their tracks given the political tell-tale signs in the region.

The CS and Kakamega governor were traversing the area seeking blessings from elders in the larger Western region which stretches to Trans Nzoia in the Rift Valley.

Wamalwa and Oparanya were tasked with being the mouthpiece of the Western region during a meeting held at Cotu Secretary General Francis Atwoli’s Kajiado home in May last year.

Their first stop was in Bungoma on June 4, 2020, where they met and sought blessings of the Bukusu and Saboti councils of elders at St Crispin’s Anglican Church.

This move was interpreted to mean waving the red card to Mudavadi.

Wamalwa and Oparanya had come out as the face of the new western Kenya leadership.

Buoyed by his position then as Council of Governors chair and deputy party leader of one of the biggest parties in the country, Oparanya was convinced he could easily edge out Mudavadi.

The Western voters’ bloc is one of the crucial regions likely to determine the winner of 2022 presidential elections.

In 2002, the region rallied behind former Vice President Michael Kijana Wamalwa who was Mwai Kibaki’s running mate on a Narc ticket. They were backed by ODM leader Raila Odinga. 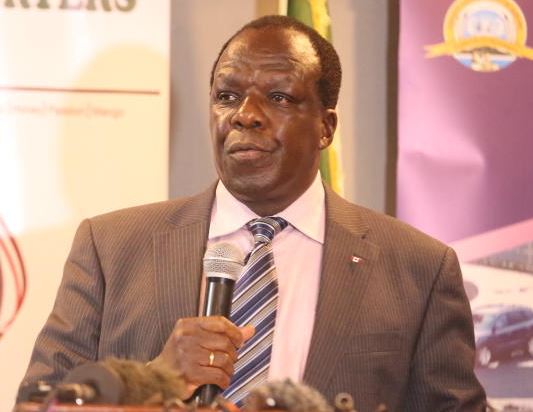 Run out of steam

The Lion party bagged a majority of elective seats in the region but Wamalwa died the following year and Moody Awori was appointed vice-president.

Back to last year, Eugene Wamalwa and Oparanya (pictured) went ahead to invade Vihiga County, which is seen as Mudavadi’s turf.

They held a meeting with elders from Maragoli, Terek, Banyore and Tiriki communities at Ebunangwe and sought their blessings.

But barely ten months later, the duo seems to have run out of steam, with some political analysts arguing that there could have been more than meets the eye in their campaign.

Some argue that the shadows of Raila loomed large in their meetings with the elders but Wamalwa and Oparanya had insisted that they were on a mission to unite Western communities in the spirit of the handshake between President Uhuru Kenyatta and ODM leader and the Building Bridges Initiative.

Frank Matanga, a political science and international relations expert and lecturer at the Masinde Muliro University, argues that Wamalwa and Oparanya might have been part of emerging political camps in the region given the huge political gaps in Western.

According to Prof Matanga, most locals have now embraced the new unity between Mudavadi and Wetang’ula “and it looks like a formidable force to reckon with.”

According to him, Wamalwa and Oparanya could have realised the ground had shifted and thus may not make any impact even if they were to reactivate their campaigns.

The duo mobilised former political bigwigs from the region who accompanied them during their meetings with elders in Bungoma, Vihiga, Kakamega, Trans Nzoia and Busia counties.

The former combative Westlands legislator argued that Mudavadi and Wetang’ula appeared to be guessing which direction to take politically and ought to pave the way for Oparanya and Wamalwa.

But the elders and the Kajiado Declaration that recognised Oparanya and Wamalwa as spokespersons for western appear to have faded away.

Kombo appears to have made a U-turn and like several other elders, he has opted to throw his weight behind Mudavadi.

Mudavadi mobilised elders from across the region who endorsed him as the region’s presidential flagbearer in 2022 at his Mululu rural home recently.

The 500-odd elders vowed not to endorse any other leader for the same position and urged the ANC leader to embark on creating political and friendship networks across Kenya and boost his chances of getting elected.

Martin Andati, a political analyst, says Mudavadi needs to focus more on solidifying his Western bloc “because the winning team in 2022 will comprise regional kingpins.”

According to Andati, ring-fencing Western would guarantee Mudavadi and Wetang’ula a place at the negotiating table.

My new position is good for Coast, says Madzayo

Deputy minority leader says his election not meant to scuttle plan by some leaders to form a coalition of political parties based in region.