Why is it that one kicks the bucket when they die while others bite the bullet?

Most idioms, sayings, proverbs, myths, names etc have a historical or some other background; a context actually.  From today, we introduce a thrice-a week column called Why is that we say…?  It will run on Monday, Tuesday and Saturday

So, why is it that you kick a bucket?

To kick the bucket means to 'die'. There are several theories about the origin of this commonly used colloquial expression.

But, think of it, why would anyone associate death with kicking a bucket? The connection between buckets and death was made in 1785.

John Badcock's slang dictionary of 1823, explains that "One Bolsover having hung himself from a beam while standing on a pail, or bucket, kicked this vessel away in order to pry into futurity, and died as a result.

Nevertheless, the theory has been challenged, since there is little connection of buckets to deaths. Perhaps, one would rather step on a solid item, while climbing to the noose.

The next explanation is that of a yoke, that was used to hold pigs by their heels to lock them for slaughtering. This happened mostly in parts of Norfolk.

The “Kicking off the bucket” now came as a result of death spasms, where the pig would kick before dying, creating an impression of ‘kicking the bucket’.

The term which dates back to the 16th century is believed to have an origin in either Old French trébuchet meaning a balance, or buque meaning a yoke, or the fact that the raising of the yoke on a pulley resembled a bucket being lifted from a well.

Another theory suggests that the source of the phrase comes from the Catholic custom of holy-water buckets.

After death, when a body had been laid out, the holy-water bucket was brought from the church and put at the feet of the corpse. When friends came to pray, they would sprinkle the body with holy water.

Example in a sentence: He kicked the bucket after contracting the Coronavirus disease. 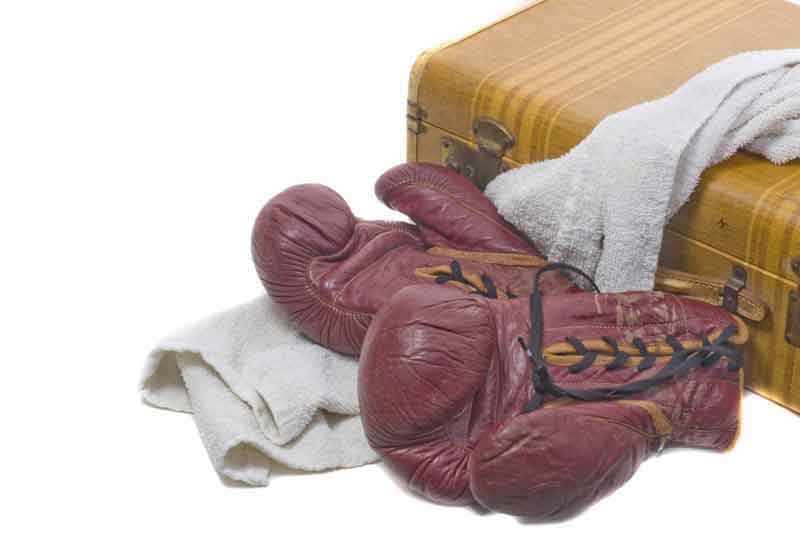 Throwing in the towel

A pugilistic (boxing) phrase, it means to give up, to quit, to avoid further humiliation or domination when facing defeat in a contest.

The idiom evolved around the boxing ring. Historically, when a boxer sensed defeat after soaking up blows, and his side wanted to stop the fight, they would throw in a towel in the ring to indicate surrender.

That happened when a boxer was subdued and the referee did not stop the match.

What followed is that the opponent’s side, threw in the towel to signify they had accepted defeat. The referee then stopped the fight.

It was after that incident that the word was used figuratively. The phrase then evolved to be used in non-boxing contexts.  If a candidate withdraws from a cut-throat electoral race, we could say he has thrown in the towel.

Throwing in the towel was used interchangeably with ‘throwing in the sponge’. Normally, sponges are always around the ring, to boxers’ sweat or blood during breaks.

Throw the hat into the ring

Interestingly, throwing a hat in the ring has the opposite meaning to throwing in the towel. It means joining a contest or a race.

Back in the 18th century and below, the rings were circular. They were not the square ones, with ropes that are around today.

Typically, a crowd of onlookers would surround the circle, where they would cheer their fighters on. However, because the fights had stakes on them, some would be charged and would want to jump in and challenge the opponents in the ring.

By throwing in their hats, they signified their intentions to join the fight, and let the referee know.

The word dates back to the 19th century and has been used since then, usually in contests, campaigns, and situations where there is competition.

Example in a sentence: Musalia Mudavadi has thrown his hat in the ring for the presidential contest in 2022.

Occasionally, one is put in positions to do things that are either painful or objectionable, but must be done anyway.

If that person forces themselves to continue with the task in hand, they are said to ‘bite the bullet’.

The adage has been put forward from the practice of having a patient clench a bullet between their teeth, as a way of coping with the pain of a surgical procedure without anesthetic.

Historically, patients, mostly soldiers in war, would have to perform a surgery on their colleagues in an active war scene, such as removing a bullet lodged on the flesh with a dagger. You see a lot of that in war and cowboy movies.

So, to top the injured from biting their tongues, they would had to bite the bullet that made sure the teeth in the upper and lower jaw didn’t meet.

The bullet was used due to its small size and its availability during battle situations.

Sticks would at times be used to prevent the patient’s teeth from breaking due to pressure of biting a metallic object.

Another theory on ‘biting the bullet emerged when the British Empire was at the height of its power in India.

A new rifle was introduced, with paper cartridges greased with animal fat.

To load, soldiers bit the paper and poured the powder down the muzzle.

This caused religious turmoil for the Sepoys – native Indian soldiers in the British army – as they were not permitted to eat the meat or fat or sacred animals.

They had to be forced by the British officers to ‘bite the bullet’. Offended Sepoys eventually sparked the Indian Rebellion of 1857.

Idioms words Why is it that Standard Media