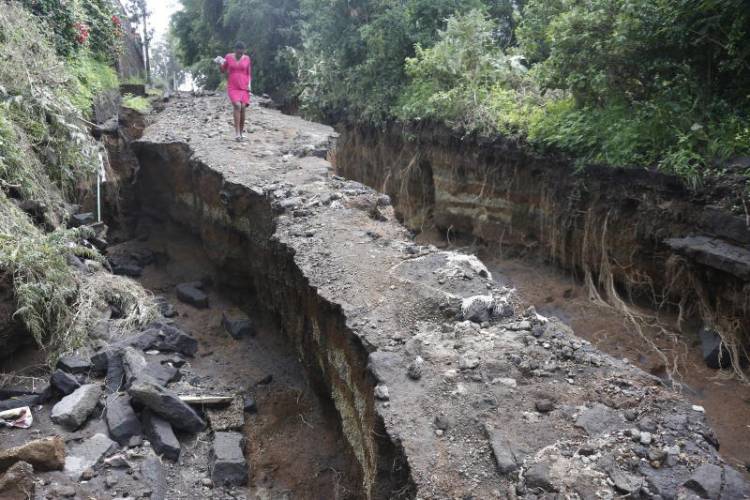 Heavy rains experienced across the country may have come as a relief to farmers, but not to residents of Nakuru County.

Flash floods from the Menengai Crater - in the northern part of Nakuru town - sweeping through underground fissures have caused land to shift, threatening lives, homes and investments along the fault lines.

Recent studies have estimated that around 150,000 residents who reside along the fault lines are sitting on a ticking time bomb.

Studies have identified underground fault lines in the region, caused by volcanic activities as a result of eruption of the Menengai crater decades ago.

The fault lines pass through residential and commercial areas in the town.

Jackline Moraa, 35, woke up one morning to find neighbours marveling at a huge crack outside her gate at Shabab estate.

“At first, I thought the road outside my gate was under rehabilitation, only to see a huge hole that had swallowed part of George Morara Road,” said Moraa.

The crack was caused by floods.

The 2km fault line that cuts across roads in the populous Nakuru West Sub-county sparked fears among residents of Koinange, Shabab and Kaptembwa estates.

“The run-off water sweeping down the slope that joins the underground water drainage system could not find an appropriate outlet and as a result pushed the earth upwards,” explained Paul Njoroge, a geologist at Geothermal Development Company (GDC).

Eng Njoroge, who is among experts from KenGen and GDC tasked by the Nakuru County government to study the fault lines and map out the extent of the fissures, said whereas some parts of Rift Valley had remained tectonically inactive in the recent past, there could be movements deep within the earth’s crust that have resulted in zones of weakness extending all the way to the surface.

The geologist said a quick assessment by his team had established that the spot could be just one of the tens, perhaps hundreds, of other weak spots on the Great Rift Valley, which runs through the continent from the Horn of Africa to Mozambique.

Jackson Raini, who is also involved in the study, said there are three major fault lines that pass through London Estate, located on the lower slopes of a dormant volcano.

“One of the fault lines is as deep as the bedrock which is faulted and, in case of a downwarp, a lot would be lost,” he said.

In most parts of Kenya, the rainy season runs from March to June. Should the rains continue, which is likely, the geologist feels there will be more erosion in Nakuru area. “More land carrying houses will definitely sink,” Mr Raini predicted.

“We’re waiting with our fingers crossed hoping for the best,” said Njuguna Muya, a landlord whose 12 houses are built along a fault line.

Some people moved out of the houses after the fault line emerged, but Mr Muya said it would be economic suicide to heed Governor Lee Kinyanjui’s advise to vacate the houses.

Findings of the study commissioned by the county government whose results are yet to be made public indicate the presence of a fault zone that strikes Northwest-Southeast of Nakuru town.

The study warns that construction around the faulted zone should be carefully planned and where possible reinforcement done.

“More research can also be done to map other faults cutting across Kiamunyi estate and its surrounding areas. Seismic stations can also be set up to monitor the activity of the fault zones,” read part of the report yet to be presented to Governor Kinyanjui for action.

In 2007, the Department of Mines and Geology furnished the defunct Nakuru Municipal Council engineer with a report on fault lines and fissures in the town. The report was supposed to forewarn real estate developers to avoid affected areas and identify the type of structures to be erected on such ground.

A Building and Construction Standards Codes obtained from the county archives shows that the defunct local authority developed a code/regulation which recommended development of low-storey buildings - less than four floors - which is currently being disregarded.

But as the experts continue to point out that a large part of Nakuru has fissures that pose danger to tall buildings and that soil in the region is unconsolidated as a result of past eruptions from the Menengai Crater, dozens of new buildings with as many as 12 floors are dotting the county skyline.

The county administration has now been forced back to the drawing board following emergence of fissures in various parts. Moreover, seismic tests should always be carried out, especially before a high-rise building is put up in the town, said Raini.

He explained that during the rainy season, when most of the fault lines emerge, the overlying unconsolidated volcanoclastic sediments become over saturated with water.

“The water reduces the shear strength of the sediments and also introduces extra loading through saturation leading to subterranean erosion along faults,” he added.

He further explained that the unconsolidated sediments then collapse into the subsurface water channels, which closely follow the fault zones, leading to formation of “sinkholes.”

He said buildings constructed on faulted basement are at a risk of cracking on the walls and worse still, can suffer subsidence in case of an earthquake or heavy rains.

Raini noted that apart from being hazardous, ground fissures degrade the environment when sewage water, refuse and garbage enter into the groundwater systems through the sinkholes.

The governor assured that his administration would implement directives to eliminate risks associated with structurally weak buildings.

“We will ensure that people move away from all structures that are on the path of the fault line after the study is carried out,” he said.