By Gilbert Kimutai | 5mos ago 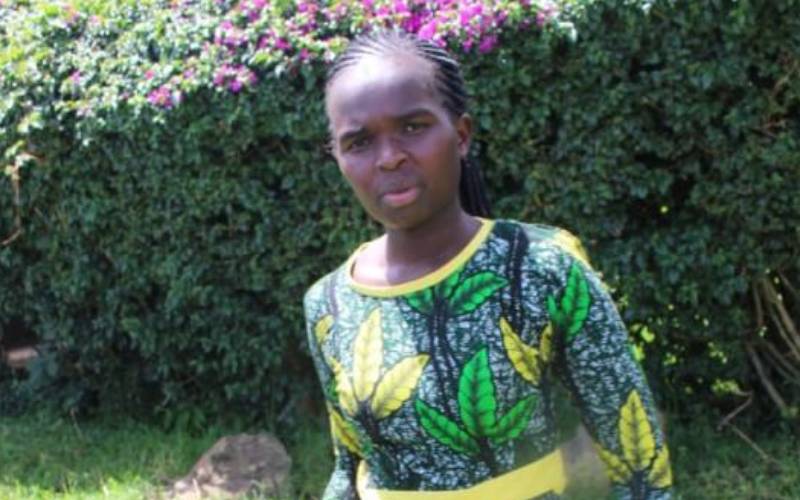 Linet Chepkorir’s looks have propelled her to political stardom in a way she never expected.

The shy looking 24-year-old (pictured) endeared herself to voters with her charming smile and simplicity.

Though her name could not ring any bell in the county’s political circles in the past five years, she won the party nominations in her first attempt.

She will be smiling all the way to the August 9 polls, with one foot in Parliament as the Bomet Woman Representative on a United Democratic Alliance (UDA) ticket after beating 12 experienced politicians.

Chepkorir, who is popularly known as Toto due to her small body frame, is assured of victory in the August General Election because the party is popular in the area.

When she declared interest for the post late last year, many dismissed her as a joyrider out to seek publicity.

She would later face humiliation while attending UDA party aspirants meeting at Deputy President William Ruto’s residence in Karen, Nairobi after guards at the gate attempted to block her because of her age.

“The guards thought I was taking advantage of the meeting since I looked young and I was poorly dressed but after showing the invitation message, they let me in,” she said.

When the Saturday Standard caught up with her in Bomet yesterday, Chepkorir could not hide her joy.

She said she caught the leadership bug while still in school. From primary to university, she held leadership positions.

“I was the head girl in primary and secondary schools,” she said. “I was picked to be a captain in campus as well and when I cleared campus I thought of trying my hands in politics.”

Her breakthrough came after a photo she took at the DP’s Karen residence went viral on social media causing a storm.

“I was only taking the photo hoping to share it for fun but I was surprised when I received calls from people promising to support my bid,” she said.

After the humiliation, she never looked back, saying the overwhelming support gave her the courage to push on.

She said many people including relatives asked her to drop her bid.

“They told me I was still young and could not fund my campaigns but I stood my ground,” she said.

Chepkorir said demand for experience while seeking employment made her choose politics.

She said she was not patient to gain experience as a procurement officer so as to be employed and that is why she decided to venture into politics.

Chepkorir said her biggest fear was facing experienced politicians with deep pockets but she did not allow it to hold her back.

“I have seen campaigns where money is splashed yet I could not even afford party registration fee but that did not stop me,” said Chepkorir.

Without any income and savings, Chepkorir turned to friends and relatives who organised a fundraiser at her Chemamul village in Bomet East.

She said after the fundraiser, she never looked back despite propaganda being spread about her.

She is campaigning on the platform of women empowerment through the affirmative action funds, encouraging the youth to go for vocational training and take advantage of the 30 per cent procurement allocation for youth in government tenders.

Young people in the county are now associating with her success and have vowed to emulate her.

Janet Rugut, a nominated MCA, said Chepkorir’s is a wake up call to youth and women in the society.

Rugut said women are going to rally behind her to ensure she wins in August.

Chepkorir will face nominated Senator Alice Milgo of Chama Cha Mashinani, who dismisses her as inexperienced.

What we know about deceased lawyer Paul Gicheru
National
By Standard Reporter
22 mins ago
Lawyer Paul Gicheru is dead
National
By George Maringa
2 hrs ago
Youths hold key to ending FGM, other harmful cultural practices
Opinion
By Leyla Hussein
4 hrs ago
Premium Why Kenya should embrace electoral college, US style
Opinion
By Elphas Wanda
4 hrs ago
.