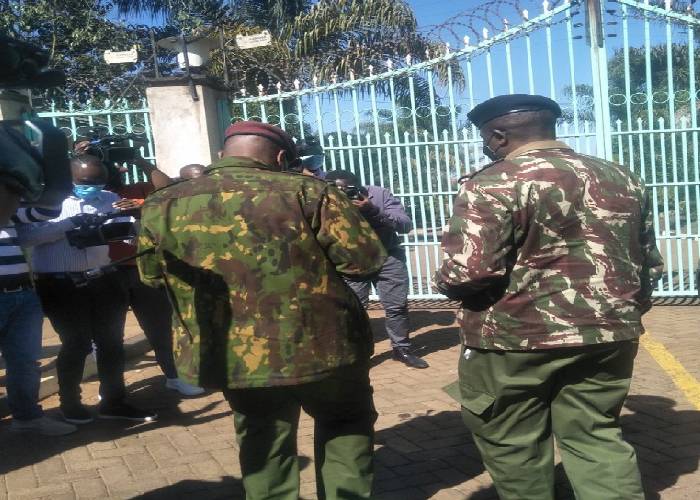 The AP officers arrived at the DP's Karen residence in two vans and had a meeting with their GSU counterparts before heading to Ruto's Hardy home for a similar exercise.

For the better part of Thursday, the fate of DP Ruto’s security was a topic of speculation after his communications team claimed there were plans to redeploy security personnel stationed at his Karen and Sugoi residences.

According to the Communications Director at the Office of the Deputy President, Emmanuel Tallam, a senior police inspector in charge of security at the DP’s Karen residence was called and directed to inform the security personnel that they’d be leaving the facility by 2pm on Thursday, August 26.

“They (police personnel) are, however, yet to leave as they haven’t handed over to a new team,” Tallam to The Standard reporter at 2pm.

Tallam further said the GSU officers are expected to report back to their headquarters in Ruaraka pending redeployment.

The Government side, however, remains tight-lipped on the matter.

Police spokesperson Bruno Shioso told The Standard he had no comment regarding the reports about the redeployment of GSU officers guarding the DP.

A high-ranking officer, who spoke to The Standard in confidence, said the planned redeployment is a normal operation in the police service and it should therefore not raise any eyebrows.

The Standard has sent a reporter to DPs Karen residence in Karen. By 3:30pm the residence was still being guarded by GSU officers.

The said redeployment plans come on the back of a frosty relationship between President Uhuru Kenyatta and his deputy, whom he is accusing of sabotaging his quest to unite the country.

In an interview with senior editors on Monday at State House, Nairobi, Kenyatta said he “does not understand” why Ruto is opposed to him (President) working with Raila Odinga.

The Head of State further urged Ruto to resign if he is disgruntled by the President’s sense of direction.

A day later, in a public event in Kwale, the deputy president said he won’t quit, vowing to serve his term in office to the last day.

A teacher was raped, two primary school students defiled and three watchmen assaulted by a gang of criminals which raided three schools.

By Titus Too and Lynn Kolongei | 6 hours ago

PNU lays strategy ahead of next year's general elections
.