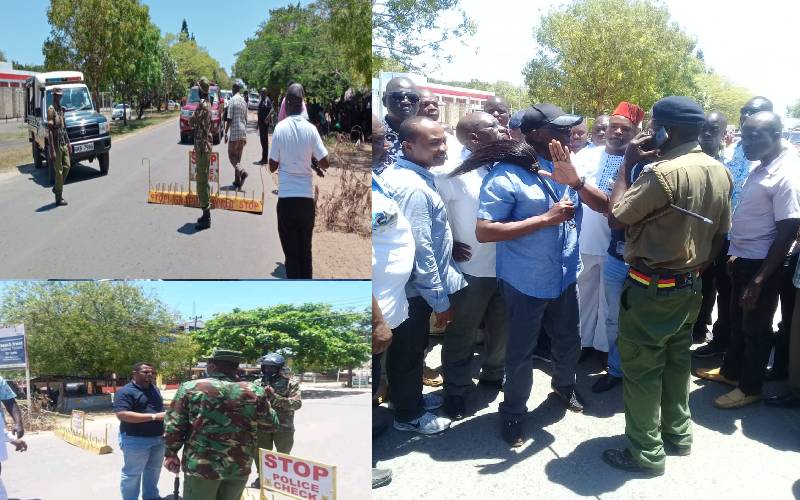 Leaders allied to Deputy President William Ruto were on Friday blocked from holding a meeting at Ukunda in Msambweni to drum up support for Independent candidate Abdallah Bader ahead of the by-election.

Police officers barricaded roads leading to Ukunda Show Ground where the leaders were expected to hold a meeting to drum up support for Bader ahead of the by-election.

Year that Ruto’s allies found themselves on the back foot

Khalwale had vowed to lead Ruto allies to campaigns for the Independent candidate set to square out it with ODM’s Omar Boga despite Jubilee not fielding a candidate.

Muthama accused the police of denying them access into REEF hotel in Diani where they had retreated to have lunch after their meeting was stopped.

“The Hustler Nation fraternity in Mswambeni, we have been denied access to DIANI REEF hotel for lunch!”

Kinyua said politicians intending to hold public meetings and gatherings will be required to notify the Officer Commanding Station of the given area three days prior to the intended gathering.

Police officers on Thursday stormed Ruto’s Nyamira fundraiser venue ahead of his visit forcing the DP to postpone the fundraiser to another date.

The police dispersed area residents who had already arrived at Kebirigo High School where the DP was expected to lead the fundraising event for a boda boda Savings and Credit Cooperative Organisation.

Ruto on September 24 went against his party’s wish to pull out of the Msambweni by-election race and backed Bader.

After Jubilee secretary general Raphael Tuju had announced the party would not be in the race, Ruto insisted he had wanted the ruling outfit to field a candidate.

Dori was an ODM MP but at the time of his death, he was being accused by ODM of backing DP Ruto.

How GG Kariuki found out where the real power rested

Some ministers learned power dynamics in the hard way