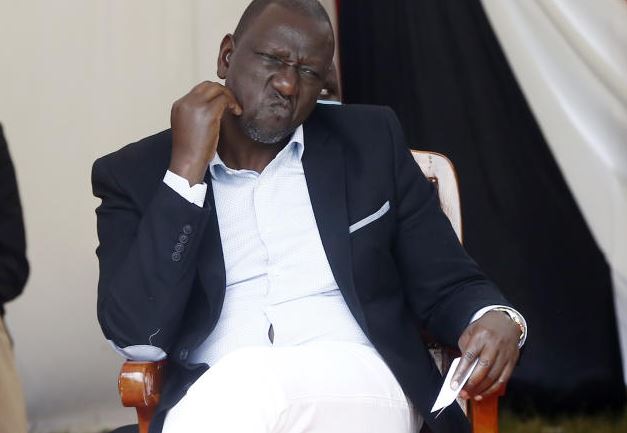 Deputy President William Ruto has told off his critics over their continued attacks on him and his style of politics, saying they are fighting a losing battle.

“We have people who are clearly angry with me over things that don’t concern them. I can only tell them to stop wasting their time calling me names, exhibiting pride and hate for no reason. I’m here to change a narrative in our politics and they won’t change that,” he said.

The DP, who was accompanied by several MPs, spoke minutes after Jubilee Party Secretary-General Raphael Tuju issued a statement on behalf of the party National Management Committee, recommending his removal from deputy party leader slot.

“We have seen him going around the country launching the hustler movement. These are campaigns and open defiance to the President,” Tuju said.

Ruto, however, said his hustler movement was unstoppable and that he would continue to engage the ordinary folk.

“Yes. It is time for change, time to talk and walk the hustler narrative. Not about sharing power but empowerment. Not about positions but jobs for our people, not about leaders but ordinary citizens. This wheelbarrow conversation will continue,” he said.

Ruto said those opposed to the hustler narrative were focused on ensuring Kenyan youth remained poor for easier control and political manipulation.

“If you see them angry with me giving out boda bodas, wheelbarrows and hand carts, it is because they fear they will not have people to use in political demonstrations. I shall keep the hustlers busy, productive and unavailable to them,” he said.

The DP added: “Those fond of using our youth in demonstrations on the streets will be left with their children and wives. I know this is a difficult conversation but we shall have it anyway.”

Elgeyo-Marakwet Senator Kipchumba Murkomen faulted at Tuju and Jubilee Party vice-chairman David Murathe, describing them as a thorn in the flesh of Kenyans.

“We have the worst form of hypocrisy in Jubilee by self-seeking people. Tuju has become so proud that he has forgotten where he was picked. There shall be no truth in the party if we allow the likes of Tuju and Murathe to lecture the DP,” said Murkomen.

He said the two have been the greatest enemies of the ruling party and its support base, and that their actions had led to divisions across the country.

“The two have been fighting hard to sell the false narrative that the President is not in good terms with the DP. We can’t claim to be uniting Kenyans while our own house is divided. They are the worst elements of division of our time. The President should start by firing them,” said Murkomen.

He told off Tuju on remarks that Ruto allies were not welcome to the Jubilee headquarters, saying he has no moral authority to deny any member of the party access to the premises.

“We shall be going there as long as our contributions are funding the party,” Murkomen said.

“It is evident that Tuju is an ODM sympathiser. He has described us as crooks who are not welcome to our party offices. From Monday, we shall be moving into Jubilee House. Let him dare shut the gates for us and we shall bring them down,” said Kihika.

Langata MP Nixon Korir said this was the beginning of their fight for their space in the Jubilee Party.

“We were not elected to complain. We elected you to go to Parliament to seek solutions. You should not sow seeds of discord,” said Kinyanjui.