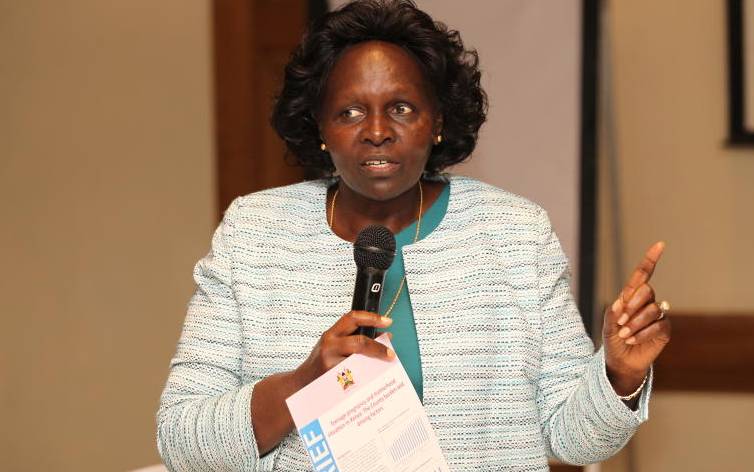 The Senate leadership has formed a nine-member mediation committee to look into the stalemate of the third basis revenue sharing formula that has sharply divided lawmakers.

On Wednesday, in a meeting chaired by Senate Speaker Ken Lusaka, the team also planned a one-day retreat in a bid to broker a deal that will ensure no county loses funds.

The committee to be chaired by Deputy Speaker Margaret Kamar (Uasin Gishu)(pictured above) will have an uphill task to convince senators to back one formula which is not antagonistic.

Lusaka voluntarily stepped down for Kamar to chair the crucial committee that will bridge the wide gap between the pro-population and the pro-land mass protagonists.

This is after the Senate for the seventh time, failed to pass the formula of revenue sharing between the devolved units.

Minority Whip Mutula Kilonzo Jnr (Makueni) said the ad hoc committee will have both teams of equal number to broker an agreeable process that will not split the country.

Mutula said the team will be charged with synchronising all the amendments before the House in a bid to bridge the divide.

“The team will look at all the amendments so that we have a single agenda that is not contentious. We are still in consultation and we shall be releasing the names,” he said.

Tharaka Nithi Senator Kithure Kindiki buttressed that his faction, ‘Team Kenya’, is consulting among its ranks to present a high-profile delegation to the mediation team.

Kindiki said in picking four members from ‘Team Kenya’ dubbed as the Nairobi Senator Johnson Sakaja and Mutula’s axis will consider the face of Kenya, inclusivity and diversity.

Senate Majority Whip Irungu Kang'ata (Murang'a) and the senators supporting the ‘one man, one vote, one shilling’ mantra will also second a team of four to the mediation committee.

Both teams were yet to settle on the names.