The ultimate survivor: ODM now fights to save Waiguru 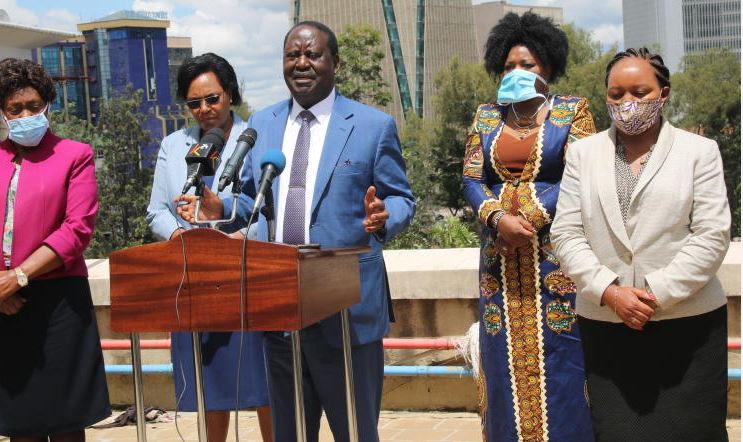 An ally of Opposition leader Raila Odinga has signalled ODM could come to the rescue of impeached Kirinyaga Governor Anne Waiguru (far right) in the Senate, highlighting the success of the charm offensive by the besieged county boss.

The show of solidarity from National Assembly Minority Whip Junet Mohamed is significant considering ODM members orchestrated Waiguru’s downfall from Cabinet in 2005 at the height of the National Youth Service (NYS) scandal.

“There are some people out there who do not believe women can lead. As ODM, we believe in women’s ability. We want to give them equal opportunity because we have witnessed women leading well in government and they need to be supported,” he said.

“Waiguru is a governor, while Raila is a national leader who are free to meet and consult anytime in the Republic of Kenya. There is nothing bad if they meet or discuss,” Junet said in response to questions on whether Raila had met the governor to discuss this week’s Senate proceedings.

Senate will vote to uphold or dismiss Waiguru’s impeachment by the Kirinyaga County Assembly.

Waiguru’s impeachment has, however, placed President Uhuru Kenyatta and Raila in a tight spot since she is among the vocal campaigners for the Building Bridges Initiative (BBI) in the Mt Kenya region.

Coming months after Ferdinand Waititu lost his job as Kiambu governor following an impeachment upheld by the Senate following graft allegations, the fate of Waiguru is already generating political heat and exposing the double speak by politicians. Waititu’s allies believe he was punished for his links to Deputy President William Ruto.

Waiguru’s impeachment is complicated, given her being ‘politically correct’ but facing graft allegations and having unceremoniously left Cabinet in 2015 over the Sh791 million NYS scam. Observers say the governor is walking a tightrope to retain her seat.

Central Organisation of Trade Unions (Cotu) Secretary General Francis Atwoli, a vocal BBI crusader, has asked Uhuru and Raila to rally their troops to save Waiguru in the Senate.

Sources say Raila and Uhuru allies want a select committee to consider Waiguru’s removal, but her critics, particularly those who had sided with Waititu at the Senate, want the case decided by the plenary as was the case with the former Kiambu governor and late Nyeri Governor Nderitu Gachagua.

The support from ODM shows the changing fortunes for Waiguru.

Raila’s previous scathing attacks against the then Devolution Cabinet Secretary over the NYS scandal led to her eventual resignation, although she attributed her decision to quit to a doctor’s advice to take lighter duties.

“The case of the NYS clearly demonstrates the manipulation and the game of favourites Jubilee is playing with corruption, while accusing the Opposition of doing nothing,” read Raila’s statement in 2016.

“As the government claims to be finally cracking open the case, the silence on Ms Anne Waiguru, the former CS at the centre of this scam, is loud. The protection Waiguru is enjoying clearly demonstrates that the NYS scam is President Uhuru Kenyatta’s scam and its chief architect, Anne Waiguru, is his protectorate.”

Raila added: “Kenyans ought to be reminded that right from the start, President Uhuru Kenyatta issued statements from State House declaring Waiguru clean even before investigations were done.”

But referring to the sudden turnaround, Narc Kenya leader Martha Karua, who was Waiguru’s competitor for the gubernatorial seat in the last elections, said: “We have political laundromats that apparently can cleanse all transgressions to the laws of Kenya and overran all institutions.”

Nakuru Senator Susan Kihika dismissed Raila’s statement yesterday where he denied reports that he held talks with Waiguru to plot a rescue plan.

“I will disregard the statement and instead wait to see your allies behave in the Senate on Tuesday,” said Kihika.

“For now, we shall treat your statement as a decoy. If government wants to save Waiguru regardless of the facts, then she will be saved,” Murkomen tweeted.

He added: “If government and Capitol Hill combine forces, then Senate will do nothing. A few of us will make some noise, quote the Constitution and our DC will rule us out of order and declare her ‘mweupe kama pamba’.”

“I want to assure Kenyans that Senate is a House of integrity and shall serve justice to the assembly and the governor without fear or favour.”

Meanwhile, The Standard has reliably learnt that the Ethics and Anti-Corruption Commission (EACC) has launched a probe against the governor’s administration. According to investigators at the regional office in Nyeri, they have intensified investigations following allegations cited in the impeachment motion.

“We are focusing on abuse of office by the governor in receiving more than Sh10 million for trips that did not take place … or were not official. Status: Finalising invitation for statement recording,” said the EACC.

“Conflict of interest and embezzlement of about Sh50 million in procurement of integrated hospital management system that had allegedly been bought by the previous government. Status: We have summoned 38 officials for statement recording from May 28.”

During the controversial NYS scam in 2015, DP Ruto defended Waiguru, saying all accusations against her were false and had been the creation of the Opposition to paint the government as being complicit in fighting corruption.

“There are those who like to oppose everything. Leo yule jamaa anamangamanga huku na kule juu ya NYS. Tunataka kumwambia awache porojo na akiwa na shida na Waiguru (today he is moving up and down spreading rumours about Waiguru) let them come face me and Uhuru,” he dared Raila then.

In November 2016, Ruto changed tuned and told off Waiguru.

“Give us a break. Those behind theft of public funds cannot be cat-walking around freely giving Kenyans a lot of English lectures on what actually transpired. Let us be honest and call a spade a spade. It is open; public funds were lost,” he said.

“Surely, when a hairdresser (referring to Josephine Kabura) registers 20 companies and confesses that she actually carried millions in sacks, what else do you want?” asked the DP in reference to a key suspect in the scam, and who has also linked Waiguru to the scandal.

Kobia had her fair share of criticism, as did Ngilu and Wanga when they faulted the MCAs’ move to impeach Waiguru.

“It’s unfortunate that governor Waiguru’s term is being cut short by an impeachment. This is an indicator that some of us do not value strong women leadership. We are disappointed that the governor is being impeached during fight against Covid-19,” reads Kobia’s statement.

Ngilu said: “The travesty visited upon Waiguru is one of the many crooked ways that some people are using to pull her down and we strongly condemn it. You will be vindicated.”

And Wanga added: “I still insist that her impeachment was based on malice and political witch hunt. Anne is white as snow and arguably the most hardworking governor Kenya will ever have. Anne Waiguru is not corrupt.”

But Kenya Women Parliamentary Association Chair and Kirinyaga County Woman Rep Purity Ngirici challenged Uhuru and Raila not to meddle in matters before the Senate.

“We implore the Senate to ensure that equity, fairness, due process and justice to the people of Kirinyaga and the governor prevail without undue influence, coercion or duress from whichever quarters,” she said.

Senate Majority Whip Irungu Kangata, who has positioned himself as Uhuru’s ‘blue-eyed boy’, said the House shall ensure the process is free and fair.

“Senate wants the truth for the people of Kirinyaga. The assembly’s right to oversight should be respected and supported by the Senate,” he said. “The governors’ rights of fair trial must be taken into account as well.”

By Winfrey Owino and Emmanuel Too | 33 minutes ago