POLITICS
By Wilfred Ayaga and Rawlings Otieno | May 13th 2020 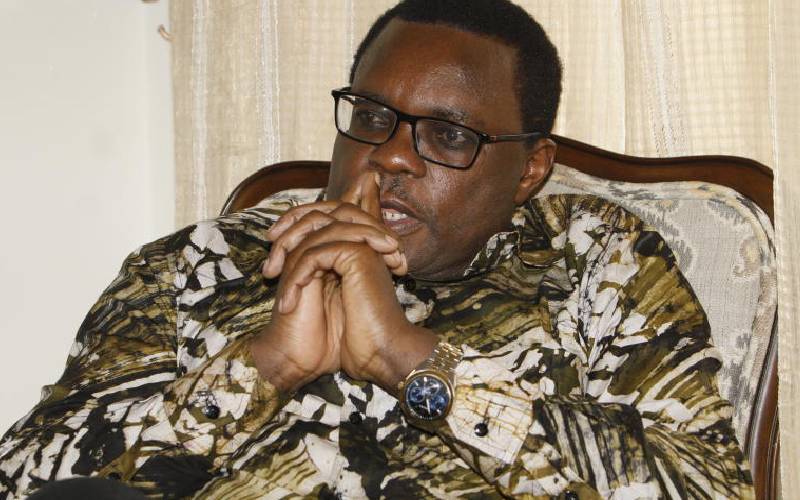 Senate Speaker Kenneth Lusaka (pictured) approved the removal of Senate Majority Leader Kipchumba Murkomen and Majority Whip Susan Kihika on Monday but in the process opened himself up for scrutiny in the background of the vicious power struggles in the ruling Jubilee party.

The Speaker did not give a detailed ruling, promising to do so at a later date, leaving the Senate in a quandary on what informed his decision.

Mr Murkomen and Ms Kihika, who are allies of deputy William Ruto, were kicked out during a Jubilee parliamentary group meeting at State House on Monday.

The DP's allies and those of the President are engaged in a vicious political battle linked to the 2022 succession politics. Ruto allies claimed the Speaker bent to political whims and approved the changes in House leadership.

Kinyanjui changes tack to fend off opposition in 2022 governor's contest

“I have received communication from Jubilee coalition from the office of the Deputy Majority Whip, Senator Irungu Kangata dated 11th May, 2020. I am satisfied that the changes were made in accordance with the relevant Senate Standing Orders and meet the threshold required under Standing Order 19 (5) there having been a majority of votes… I will make a reasoned ruling in due course,” said the Speaker.

In contention is whether the PG that effected the changes in leadership had a quorum.

While a list provided to the speaker by Mr Kangata showed 20 senators attended the State House meeting, the DP's allies claim the meeting had only 11 Jubilee members and three from Kanu.

Murkomen and Kihika are also questioning the process of communication to the Speaker of the changes.

They claimed a precedent was set in the removal of Bungoma Senator Moses Wetangula as Minority Leader where communication was done through the Minority Whip.

In yesterday's case, communication was done by Mr Kangata, who until his election served as deputy whip.

Interestingly also, the names of Uasin Gishu Senator Margaret Kamar and her nominated counterpart Alice Chepkorir appeared in the State House list, yet another list circulated by the DP's allies claimed the former was not part of the State House meeting.

An independent senator Charles Kibiru (Kirinyaga) is also listed as among those that attended the Jubilee PG.

On the floor of the House, Murkomen claimed due process was not followed and the Speaker was captive of political machinations brewed at State House, the venue of the Monday morning coup.

He went ahead to accuse Speaker Lusaka of buckling under pressure from the Executive.

“You have been pushed to a corner to make that decision that is not giving us the reasons… I have learnt that in leadership, the moment you take a decision, prepare yourself for the day you leave that position. I'm not worried about being Majority. I want to thank my colleagues who supported me despite all the intimidation from the Executive,” said the Elgeyo Marakwet Senator.

Kihika claimed that due process had been abandoned in favour of political expediency.

“I would hope that in the future, we will see more of due process. When senator Wetang'ula was removed by the NASA coalition, the ruling on the decision was communicated by the Minority Whip. In this case, this never happened, which means the rules of the game changed or as directions are given,” said Kihika.

The Speaker did not give an indication on when he will deliver his detailed ruling on the matter.

New Majority Leader Samuel Poghisio promised to work with all political sides in the Senate.

"I will use my experience to serve the House. I want to encourage my friends to take heart and let us get back together. We can always learn a thing from each other. I can assure all members that we will work together. We are still going to oversight government," said the West Pokot Senator.

The Speaker finds himself in a similar position as his predecessor Kenneth Marende who in 2008 had to make a decision that did not go down well with the Majority side that had voted him in.

At the time, MPs allied to Raila Odinga and Orange Democratic Movement (ODM) wanted the Speaker to rule against the swearing of President Mwai Kibaki as Othaya MP in the wake of the 2007 post-election violence.

Speaker Marende, however, ruled in favour of Kibaki's aide, much to the chagrin of the Majority side.

A debate has in the past surrounded whether Constitution of Kenya expressly establishes the position of the Senate Majority and Minority leaders.

Framers of the 2010 Constitution, however, argue that the principle of the position was captured, with same supreme law allowing Parliament to enact laws to give effect to some provisions.

Chair of the defunct Committee of Experts (CoE) Nzamba Kitonga argued that not every provision was provided in the Constitution, but as long as the spirit and principle is captured, then there is nothing wrong to have such positions.

“We did not expressly put that in the Constitution. The spirit of the Constitution has that. The Senate also adopted the Standing Order, which has created those positions,” said Kitonga.

Besides that, the Senate also participates in the law-making function of Parliament by considering, debating and approving Bills concerning counties, as provided in Articles 109 to 113.

Dr Ekuru Aukot, another member of the defunct CoE, argued that in drafting a Constitution, the principle is captured but the Parliament is left to enact statutes and other nitty-gritty to bring to life some of the provisions.

Murkomen’s case is done and dusted, and this was bound to happen.

By Roselyne Obala | 30 minutes ago