By Osinde Obare | 2yrs ago 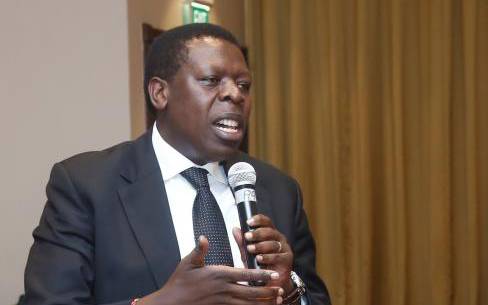 Devolution Cabinet Secretary (CS) Eugene Wamalwa (pictured) has said it is too early for him to make public his 2022 political strategy since he is focused on delivering his current mandate at the ministry.

Wamalwa said in response to calls from a section of elected leaders and his supporters to contest for the Trans Nzoia Gubernatorial seat in 2022 general elections.

“I will declare my political aspiration at the right time after getting views from residents of this county at the right time. I am currently focused on discharging duties bestowed upon me by the president,” he said.

The CS spoke during a visit to Kipsongo slums where he donated foodstuffs in the spirit of sharing with the less privileged during the Christmas festive season.

Hospital Ward Rep Eric Mwangale is leading a group of elected leaders pushing Eugene to contest for the seat currently occupied by Patrick Khaemba who will be concluding his second and final term in office by 2022.

During the burial of William Makali, son to former Vice President Kijana Wamalwa, Mwangale, piled pressure on Eugene to run for the gubernatorial seat.

"Things have gone wrong here. There is no development in our county. Come and salvage our declining economy,’’ said Mwangale as he pleaded with  Eugene amid cheering from the crowd.

Though Eugene downplayed the calls, a close ally told The Standard that the CS is weighing on several options.

"There are many cards on the table. The CS is weighing options. We are keen on the outcome of the Building Bridges Initiatives (BBI) report before making a political decision,’’ said the confidant.

Speakers from the Turkana community alleged discrimination by elected leaders in the region owing to their limited numbers saying they feel left out in major programmes set to benefit residents.

“We want change since we have been marginalized by all leaders in this region despite their promises during campaigns. Most of us are not captured in development programmes,” said Micheal Eng’olan.

The Cabinet Secretary, however, assured the community of better representation if the constitutional amendment recommendations of the Building Bridges Initiative (BBI) are adopted.

“Do not despair because every resident of Trans Nzoia has a right to get services irrespective of ethnicity or religion. The BBI will ensure there is more inclusivity,” said Wamalwa.