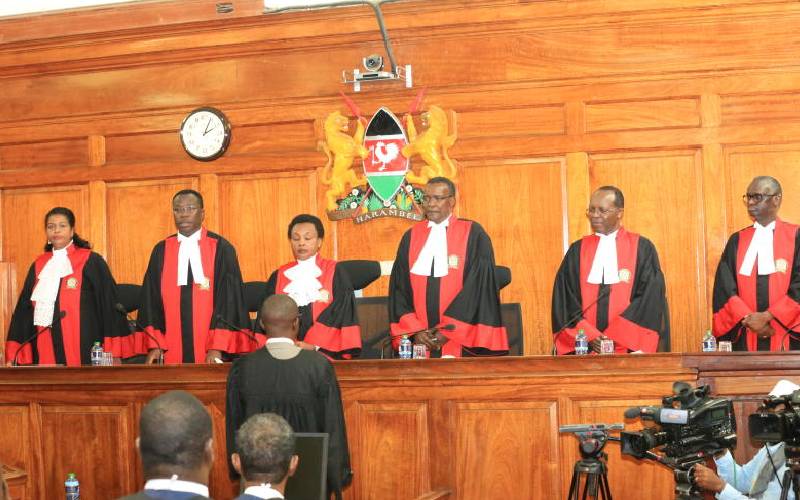 Kenya’s Constitution has been lauded, and rightly so, as one of the most transformative and progressive in the world. If effectively implemented, there is no doubt it would address most of our national challenges in line with the aspirations that informed its enactment.

Chapter 6 of the Constitution, which provides for leadership and integrity, is a unique innovation in the quest for public sector accountability and fight against corruption.

Among other transformative provisions, the chapter sets personal integrity as the yardstick for appointment and election of persons for state office. The primary objective of these provisions is to maintain accountability in the management of public affairs by keeping corrupt individuals far away from public office.

As the country marks the first 10 years of implementing Chapter 6 in August 2020, a pertinent question arises. Has the chapter sufficiently served the purposes for which it was enacted? It cannot be denied that the nation still suffers serious deficits on leadership and integrity among state and public officials. This points to challenges in the implementation process.

Even though various implementation challenges such as weak statutory frameworks and citizen apathy could be cited as some of the obstacles to effective implementation of Chapter 6, the biggest hurdle is the absence of clear jurisprudence, attributable to the courts.

For instance, the Supreme Court ruling in Advisory Opinion Reference 1 of 2017 Kenya National Commission on Human Rights v Attorney General; Independent Electoral and Boundaries Commission and 16 others (Interested Parties) [2020] eKLR stands out as inimical to effective implementation of this chapter.

This is despite that the case had provided a critical opportunity for the Supreme Court to unlock Chapter 6 and conclusively address the jurisprudential confusion that has impaired effective application of the integrity requirements to election and appointment of persons to public office.

Although superior courts have in the recent past registered commendable jurisprudence in several other aspects of the fight against corruption including in the Amuti case, Kidero case and Ojienda case, the Supreme Court missed a timely opportunity to respond to a compelling need for clear jurisprudence on how Chapter 6 should be applied.

Based on the legal bottlenecks that have hindered effective application of Chapter 6 since 2010, the Kenya National Commission on Human Rights (KNCHR), Ethics and Anti-Corruption Commission, Independent Electoral and Boundaries Commission and other agencies moved to the Supreme Court in 2017 seeking an advisory opinion and guidance on the test of integrity required for election and appointment of persons to office under Chapter 6.

The thrust of the case was that the High Court and Court of Appeal had interpreted Chapter 6 in a restrictive, conflicting, inconsistent and incoherent manner, resulting in a confused jurisprudence. Although courts have generally recognised the need to implement and observe Chapter 6, the various decisions under the chapter so far have been contradictory, inconsistent and incoherent and do not offer any clear or conclusive determination of the proper test for integrity.

This, coupled with the weaknesses in the Leadership and Integrity Act, 2012, have remained the major obstacles to effective implementation of Chapter 6. There was thus urgent need for guidance by the apex court.

Before the matter was heard, Okiya Omtatah, an interested party, raised a preliminary objection contending that the Supreme Court had no jurisdiction to render the sought advisory opinion because there were two related petitions pending determination before the High Court.

In February 2020, the Supreme Court rendered its ruling. In a majority decision of 5-2, the Supreme Court allowed the preliminary objection effectively declining to hear the matter citing lack of jurisdiction. The majority bench cited the two petitions which have been pending in the High Court since 2017 challenging various aspects of application of Chapter 6.

In the dissenting opinions, however, justices Isaac Lenaola and Mohammed Ibrahim argued that the Supreme Court indeed had jurisdiction to hear the matter, and that it was of great importance for the court to provide guidance on how Chapter 6 should be applied.

In his dissenting opinion, Lenaola rendered himself thus: “I therefore find, without hesitation, that time is ripe for consideration and direction by the Supreme Court on the applicable criteria under Chapter 6 of the Constitution… An invitation for this court to down its tools for lack of jurisdiction should not to be permitted, as such an action would occasion an injustice to the wider public interest.”

The judge further observed: “One of the issues that I would have expected this court to render an advisory opinion on, is this: Whether Chapter 6 of the constitution sets up a fit and proper test for leadership including elective and appointive offices; and if so, what is that test?” Justice Ibrahim adopted this dissenting opinion.

The dissenting voices are a clear indication of what Kenyans yearn for and affirmation of a good opportunity that arose to resolve the jurisprudential confusion that has impeded effective enforcement of Chapter 6 since 2010.

In its ruling, the Supreme Court acknowledged several of its previous decisions where it has affirmed its unfettered discretion regarding when to exercise jurisdiction and render advisory opinions under Article 163(6) of the Constitution. As observed by the dissenting justices, this was a proper case where the scales of justice should have tilted towards exercise of jurisdiction considering the great national importance and overwhelming public interest in the effective implementation of Chapter 6.

In this case, the Supreme Court ruling did not augur well for Article 259 of the Constitution, which imposes a duty on the courts to interpret the Constitution in a manner that promotes its purposes, values and principles, permits development of the law and contributes to good governance. The gaps in the Leadership and Integrity Act, 2012, cannot thus avail as an excuse for the country not to fully apply Chapter 6 in the election or appointment of persons to public office.

Significantly, courts are vested with sufficient powers and mandate to remedy statutory gaps through purposive interpretation of the Constitution. As such, courts hold the key to unlocking Chapter 6 to facilitate effective application in the clean-up of our politics and fight against corruption.

The Supreme Court, as the final arbiter in the country, should have given direction, guidance and breathe life to Chapter 6 as sought by various enforcement agencies.

In this case, the Supreme Court’s act of deference, with tremendous respect, denied Kenyans a hand in the quest to actualise their aspirations for Chapter 6 on public leadership and integrity. Kenyans expect their leaders and indeed all public officials to be, like Caesar’s wife, beyond reproach, and courts have a solemn duty in this discourse.

Unlocking Chapter 6 is not only critical but also urgent, because in less than two years, Kenyans will be called upon to elect leaders to various offices, and Chapter 6 will be at the centre-stage in this process.

By Mohamed Guleid | 17 hours ago

By Clinton Ngunjiri | 20 hours ago