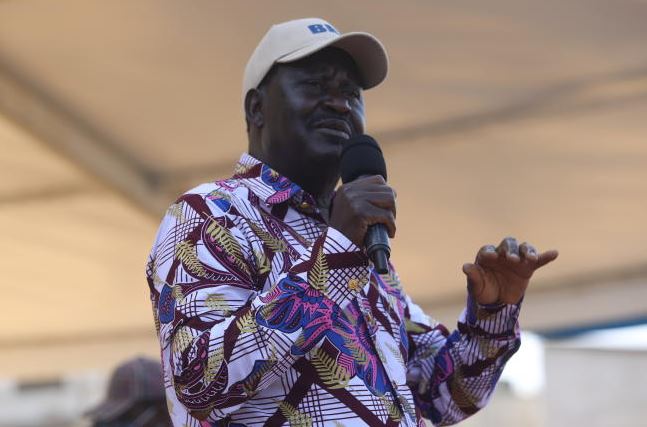 ODM leader Raila Odinga faces an uphill task settling on aspirants to back for various seats in his Nyanza turf, with many of his key allies eyeing same positions.

The aspirants have been angling to attract Raila’s blessings, seen as a sure way of clinching an ODM ticket and winning in the General Election in an area where the party still holds sway.

With about 17 months to next year’s August polls, the aspirants have been seeking the attention of ODM leader, with some ensuring they attend his events in the region where Raila (pictured) enjoys near-fanatical support.

In Siaya, Raila is torn between supporting his key strategist, Senator James Orengo, for the gubernatorial seat or Ugunja MP Opiyo Wandayi to replace governor Cornel Rasanga who is serving his second and last term.

Wandayi last week hosted Raila at his home during the launch of Sh45 million Kenya Medical Training College campus in Ugunja where he and Rasanga reached out to ‘Baba’ for backing.

Rather than come out openly and suffer a back lash, Raila said when the ‘right’ time comes, it is the people who will make the ultimate endorsement at the ballot.

Orengo is becoming popular with the electorate as the race gathers momentum with the senator and his team increasing forays in Siaya County.

The gubernatorial race has also attracted police spokesman Charles Owino who has promised to give his rivals a run for their money.

In Kisumu, Senator Fred Outa is seeking to unseat governor Prof Anyang’ Nyong’o who is enjoying unfettered access and steady backing from ‘Baba’ in his leadership.

It is said the current ongoing massive infrastructural projects in Kisumu, courtesy of handshake, has made Raila and Nyong’o ‘inseparable’.

But Outa has already raised the red flag, saying no matter what, he will not step down for Nyong’o.

“We will not step down for him (Nyong’o) even if he enjoys party support. We are also life members of ODM. We will have to go for free and fair democratic nominations,” says Outa.

Like others, the aspirants are also fighting hard to endear themselves to Raila even as Nyong’o is emboldened following his appointment to coordinate BBI campaigns in Nyanza.

Some of the aspirants are said to be contemplating vying on other party tickets or as independents.

In Migori, Raila is in a dilemma on whom to back to succeed governor Okoth Obado who is serving his second and last term. Among those said to be interested in the seat are MP Junet Mohamed whose political star has been rising following his close association with Raila.

During burial of former MP Zadock Olang in Nyatike in January, Junet poured cold water on aspirants seeking to succeed Obado, saying they were day dreaming.

Lately, former Nairobi Governor Evans Kidero who was recently advised by Homa Bay Governor Cyprian Awiti “to go back and contest in Nairobi” has been spotted around Raila on several occasions.

Kidero, is seen as one of the top contenders for the Homa Bay gubernatorial seat.

The race has also enticed ODM chairman and Minority Leader in National Assembly John Mbadi and woman rep Gladys Wanga who are key lieutenants of Raila.

Last week, Kidero was with Raila in Western during ODM campaign to drum up support for the party’s parliamentary candidate for Matungu by-elections David Were.

Kidero was given a chance to address the gathering. He was also with Raila during his four-day tour of the Coast.

Mbadi by virtue of being ODM chairman gives him unfettered access to Raila as they consult on party matters.

Magwanga, who came second to Awiti in the last General Election, says he is already ahead of the pack.

Wanga, who was made to chair the Finance and National Planning Committee of the National Assembly courtesy of the handshake truce between the ODM leader and the president, is also optimistic of winning Homa Bay seat.

Interestingly, Kidero has marshaled support of nearly all the Homa Bay MPs and is reaching out to the elites and elders to drum up his bid.

But there are those who feel in Homa Bay that ‘testing political waters’ must be done before the dramaturgical perspective can be applied even as the leaders fight to edge closer to Raila at all times.

Mbadi recently said that he is in the race to win, even as some sources demanded that Mbadi and Wanga pair for the seat as part of political horse-trading.

Rangwe constituency has produced two possible candidates – Kidero from Gem and Wanga from Kochia. Wanga has ran ahead to be endorsed as the Kochia kingpin ahead of Kidero.

This means the two will be battling out first on who to field and back or share spoils at their electoral turf.

Then there is the Homa Bay Deputy Governor Hamilton Orata from Ndhiwa constituency warming up.

Rachuonyo and Ndhiwa lead in number of votes in the county. Kasipul constituency in Rachuonyo has 57,344 registered voters and 113 polling stations as per the IEBC 2017 electoral register.

Awiti hails from Karachuonyo, which is the biggest voting bloc and hold sway to who will might succeed him.

In Homa Bay County, the battle will focus on the Rangwe’s 52,516 voters in 118 polling stations then Homa Bay town with 50,570 registered voters.

Ndhiwa where Orata comes from has 85,056 voters and 185 polling station, second largest after Karachuonyo and the larger Rachuonyo combined.

Suba South where Mbadi hails from has the least registered voters 46,499 and 113 polling stations.

Mbadi’s entry into the governor’s political race is already causing ripples with some of the aspirants demanding that he now be replaced from any national party positions to ensure fairness.

Political Scientist Wilson Agenya of University of Nairobi says Wanga has a gender advantage, but whether she will pull the strings against the “financial oligarchs and strong men” remains a cause for concern.

Wanga insists she is in the race to win.

“I will give the men a run for their money. We must break male dominance in leadership. The era of male chauvinism will end with Wanga leadership,” she asserts.

Ugenya by-election: Voters to go to the polls on 5th April

The senator claims top civil servants at Harambee House are scheming to stop Raila from ascending to the presidency.

Growing up, Obiero knew he loved to draw and got inspired by pieces of art around him