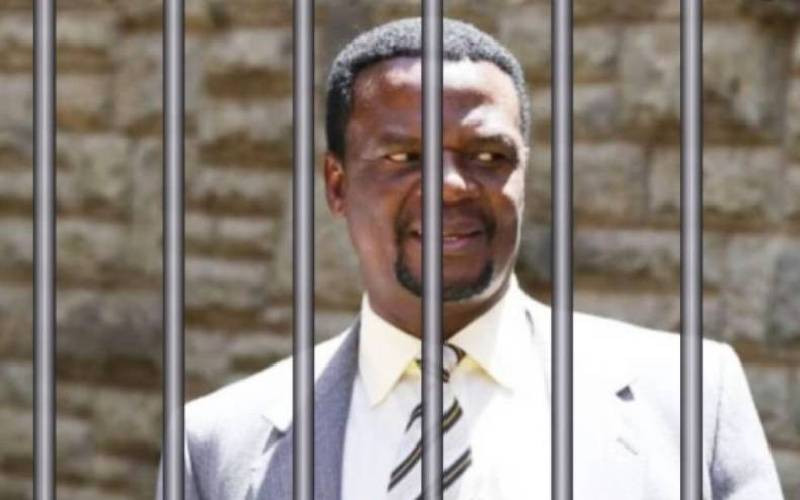 Sirisia MP John Waluke has surrendered to police a day after the High Court dismissed his appeal against his conviction.

Dressed in a navy blue jacket and a matching cap to cover his face, Waluke turned himself in at Milimani Police Station. He was taken to the cells before being handed over to prison authorities to continue his 30-year jail sentence in a journey that could end his political career.

The MP has 14 days to appeal against the High Court decision to send him back to prison, but should the Court of Appeal decline to release him on bail pending determination of the appeal, he will lose his parliamentary seat since he will be in prison for more than six months.

The Constitution provides that an MP automatically loses his seat if imprisoned for a term exceeding six months.

Waluke’s co-accused Grace Wakungu, who is to serve 32 years in jail, was also taken back to prison after being arrested outside the Milimani Law Courts on Thursday afternoon.

Waluke and Wakhungu were jailed in June 2020 when anti-corruption court Chief Magistrate Elizabeth Juma found them guilty of defrauding the National Cereals and Produce Board of Sh313 million through a maize importation scam.

The magistrate had ordered the two and their company, Erad Suppliers Limited, to pay a fine of over Sh1.8 billion, a failure for which they serve lengthy jail sentences.

After serving three months in jail, Waluke and Wakhunu were released on a cash bail of Sh10 million and Sh20 million, respectively, pending the determination of their appeal.

Justice Esther Maina on Thursday dismissed their appeals against the conviction and ordered that they either pay the fines as imposed by the magistrate or go back to jail to complete the sentences.

Justice Maina ruled that the two should not expect any mercy since it was because of their forgeries that huge public funds were lost from a public body. She affirmed the decision by the anti-corruption court that there was overwhelming evidence to prove that the two fraudulently acquired public funds.

She said the sentences passed by the magistrate were within the law to make the duo suffer for their corrupt practices.

Christine Ngaruiya: US-born Kenyan doctor teaching at Yale School of Medicine
Lifestyle
By Vincent Kejitan
3 hrs ago
Premium Why Ruto must forge a common front to rejig our ailing economy
Opinion
By Isaac Kalua Green
3 hrs ago
Babu Owino: They're now coming after me
National
By Brian Okoth
3 hrs ago
Tree planting and clean-up along Nairobi River in top gear
National
By Jacob Ngetich
3 hrs ago
.