The electoral agency faced hard but familiar questions at the Bomas of Kenya yesterday as it ran a simulation of the system it will use to transmit the results of the August 9 election.

It was no easy task for the Independent Electoral and Boundaries Commission (IEBC) as it was confronted by the ghosts of 2017 as it attempted to calm the worry of candidates and boost the confidence of the electorate two months to the polls.

IEBC is constitutionally mandated to test the technology it will use in the election two months before the exercise.

And on the deadline yesterday, the commission performed a dry run of the election transmission as it was questioned by agents of the leading candidates - Deputy President William Ruto and ODM leader Raila Odinga - over the security of the system.

The transmission was at the core of the petition filed by Raila, the now Azimio la Umoja presidential candidate in 2017, challenging the controversial re-election of President Uhuru Kenyatta.

And as the IEBC ambles towards the August 9 presidential election, it is intent on proving that it has made the necessary changes and improved the results transmission.

Yesterday’s exercise started at 3.30pm and an hour into the simulation of the Result Transmission System (RTS), the commission had received slightly more than 700 forms at the tallying centre at Bomas.

The exercise kicked off with slight hitches with the large screens and the lights flickering. Officials of the commission scrambled to ensure that everything was in order.

About 1,200 forms had been received at Bomas by the time two hours had lapsed. The simulation yesterday was based on 2,900 polling centres.

IEBC CEO Hussein Marjan said they expected delays when the forms were being transmitted.

“We expect delays but we will work with Mobile Network Operators to optimise the networks to ensure faster transmission of results,” he said. UDA Secretary General Veronica Maina wanted to be assured that the system would not fail on August 9. “What are your plans regarding a back-up of the power systems in the constituency and the national centre,” she asked.

“Each of our KIEMS kits will be equipped with two power banks to ensure they transmit the results continuously. We are not going to use smartphones to transmit results but KIEMS kits,” the IEBC said.

Ms Maina was concerned about the extent IEBC had gone to guard against network failure.

The commission announced it had acquired satellite modems for areas with no 3G network to enable the transmission of results electronically.

“We have submitted to them GPS locations of all polling centers. Only 1,111 polling stations don’t have a 3G or 4G network,” he added. IEBC was also put to task over the safety of the result declaration forms which agents of the presidential candidates said presented an opportunity for tampering.

The candidates noted that the forms did not have a provision for writing the votes in words which could lead to tampering. “What guarantees are there that the forms cannot be tampered with and 1 changed to 4 especially in those polling centres which cannot transmit the results electronically,” one concerned agent asked.

IEBC also said it will not transmit any text or figures but the image of the result form signed by Returning Officers and all agents from the constituency tallying centre.

This, the IEBC said, would guard against any manipulation. It was impossible to manipulate, or access the transmitted copies of the forms, it said. “There will be no room for manipulation of figures on the images of the results being transmitted. The information that will be transmitted will be secure. Intrusion detection systems will be in place to ensure all data in the servers is protected,” Marjan said.

“We have been using technology since 2013 and in the 2017 General Election, judges ruled that registration and verification of voters was okay. Only the transmission of results had issues. Now we have a secure result path to deliver a transparent process that will satisfy all,” he said. 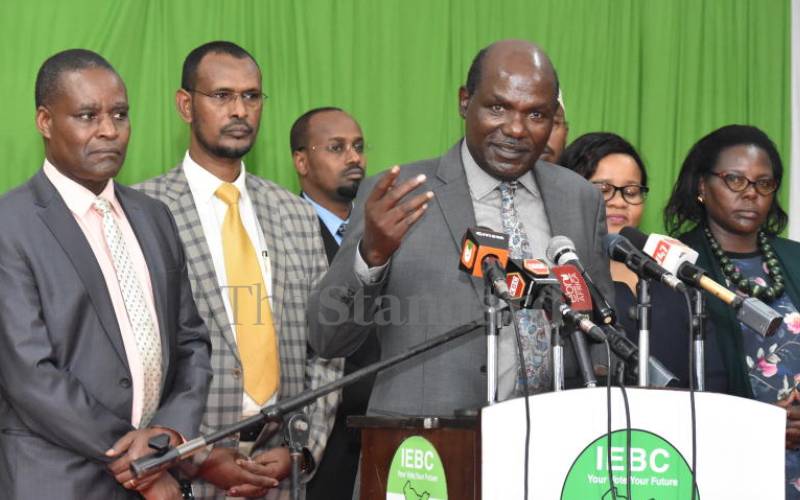 Needed: A degree of honesty at IEBC vetting
Being a lawyer of good standing, Chebukati should have used the Mong’are “precedent” and similarly cleared Jimmi.
Peter Kimani
By Peter Kimani
3 months ago
.

Woman on the move: Elizabeth Wathuti feted for climate change advocacy
Achieving Woman
By Peris Wambugu
9 mins ago
Premium From holding knife like a spear, chewing noisily and other don'ts of 'fine dining'
National
By Lynette Kwamboka
9 mins ago
World Championships: Adhiambo and Nekesa happy with their show at global event
Volleyball and Handball
By Ernest Ndunda
9 mins ago
Premium State's fuel subsidy programme leaves a deeply scarred industry
Financial Standard
By Macharia Kamau
39 mins ago
.

By Lynette Kwamboka 9 mins ago
Premium From holding knife like a spear, chewing noisily and other don'ts of 'fine dining'

By Ernest Ndunda 9 mins ago
World Championships: Adhiambo and Nekesa happy with their show at global event