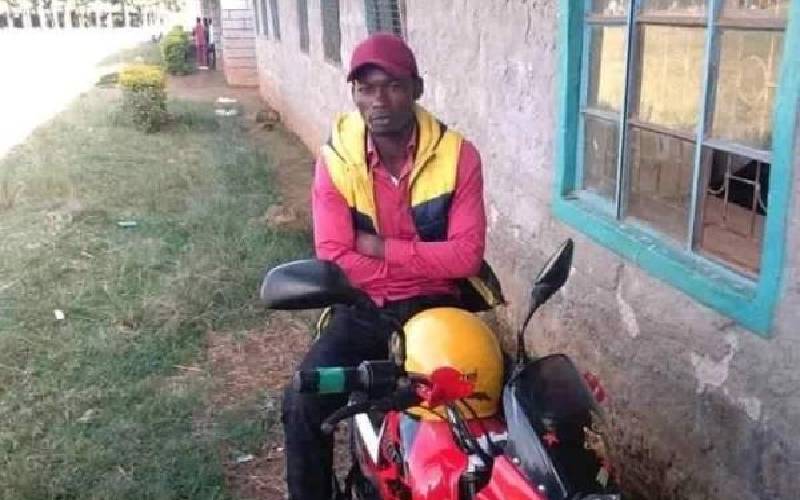 A violent altercation pitting a boda boda operator and a motorist in Igembe South subcounty, Meru, left the cyclist dead and the driver facing a murder charge.

The boda boda rider identified as 25-year-old Ian Mwenda (pictured) and businesman George Kalung’e were involved in a confrontation near Maua town.

Mwenda was on his way to Antobochiu market from Maua town when a strong wind blew off his cap, as Kalung’e drove behind him.

But as the operator came back to retrieve his cap off the road a confrontation ensued as insults were hurled.

According to witnesses at the scene, the driver confronted Mwenda and wanted to know why he had stopped his motorcycle on the road, blocking him.

It was during the confrontation between the two that Kalung’e is said to have stabbed the rider, who was rushed to the Maua Methodist Hospital but pronounced dead on arrival.

The motorist also took himself to hospital for head and hand injuries, police say.

Officers from Maua Police Station launched a hunt for the driver who was found at Mutuate in Igembe North subcounty.

Igembe South’s Directorate of Criminal Investigations officer Patrick Kilua said on the phone that Kalung’e was in their custody, awaiting to be arraigned.

Kilua said Kalung’e was driving to Garissa when the incident happened.

The DCIO said Kalung’e reported the incident at Athi Police Station and said Mwenda had insulted him.

“The suspect said the deceased hurled insults at him and smashed his vehicle’s windscreen with a stone. He took himself to the hospital and also to the Athi police post to file a report. The boda boda operator was pronounced dead on arrival at the hospital," said the DCIO.

A report by Knight Frank says Kenya’s capital has sizeable funding and ease of doing business.

By Micah Nyandoro | 2 hours ago