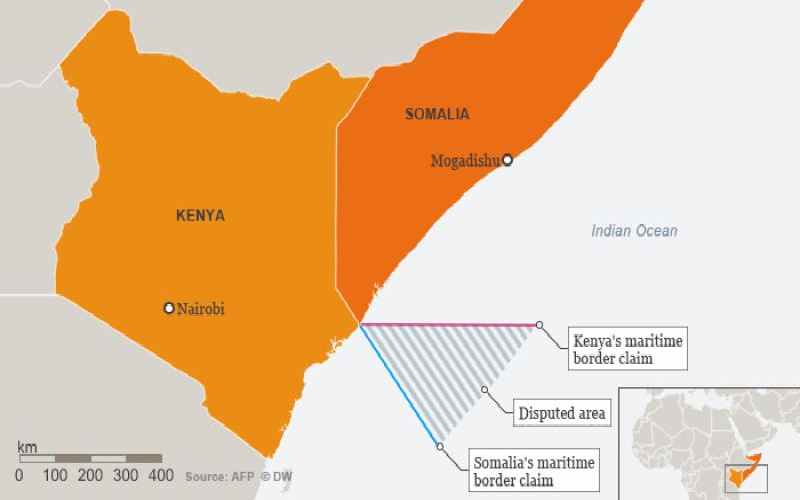 Kenya has pulled out of the maritime border case with Somalia just a few hours to the scheduled hearing at the International Court of Justice in The Hague, Netherlands.

On March 9, the ICJ, a principal judicial organ of the United Nations, stated it would hold public hearings in the case concerning Maritime Delimitation in the Indian Ocean from tomorrow to March 24.

Kenya is expected to file a notice of non-participation in the hearings, sources say.

The Kenyan legal team may tomorrow seek 30 minutes to explain grounds upon which the country may seek not to participate in the hearings.

Kenya’s maritime area is approximately 255,000km, which was determined through parallel of latitudes in 1979. Somalia recognised Kenya’s claim to the EEZ for 35 years.

However, in 2014, the Horn of African country filed a case before the International Court of Justice. The dispute was filed by Somalia’s Foreign Affairs and Investment Promotion Minister, Abdirahman Dualeh, on August 28, 2014, on behalf of his government.

The point of disagreement between Kenya and Somalia is the nature of the line of the maritime boundary.

Somalia asserts a centre line from the Kenya/Somalia land boundary terminus but Kenya insists on a straight line. Somalia’s central line carves out a triangle of the maritime area currently occupied by Kenya and where four oil blocks are located.

In 2019, Somalia floated for auction minerals within Kenya’s territorial waters alongside the four contested oil blocks.

A document named ‘Offshore Somalia 2019’ and leaked from Somalia’s Ministry of Petroleum and Mineral Resources showed five oil blocks in Lamu are a part of those Somalia has floated to investors.

The document detailed a plan, with January 1, 2020 as the date the successful bidder would start exploration.

Last year, the Attorney-General (AG) Kihara Kariuki (pictured) had asked for 12 months to prepare. ICJ instead gave him until March this year to come up with a new legal team.

Last month, the AG again asked that the court postpone the case in order to allow for a physical hearing, but the court has insisted the hearing will proceed virtually.

The African Union had urged Kenya and the Horn of Africa to consider negotiating the boundary dispute instead of battling it out in court.

AU’s Peace and Security Council invited both countries to give their side of the story. However, Somalia rejected the offer and failed to appear during the first meeting, saying it would not discuss a matter that was in court.

However, the country sent sent its Minister for Foreign Affairs Abdulkadir Ahmed-Kheir Abdi to the second meeting which did not bear fruit. If a solution can be found out of court, the better for the two countries.

Somalia sues Kenya at the international court of justice over border

The biggest setback to saving money is impulse buying, when you are always going for cheap items instead of the best.

Marvelous Marvin Hagler, who dominated boxing's middleweight division in the 1980s, has died at the age of 66, his wife Kay Hagler said on Saturday.

By Eric Abuga and Edwin Nyarangi | 11 hours ago

By Fred Kagonye | 13 hours ago

By Boniface Gikandi | 13 hours ago