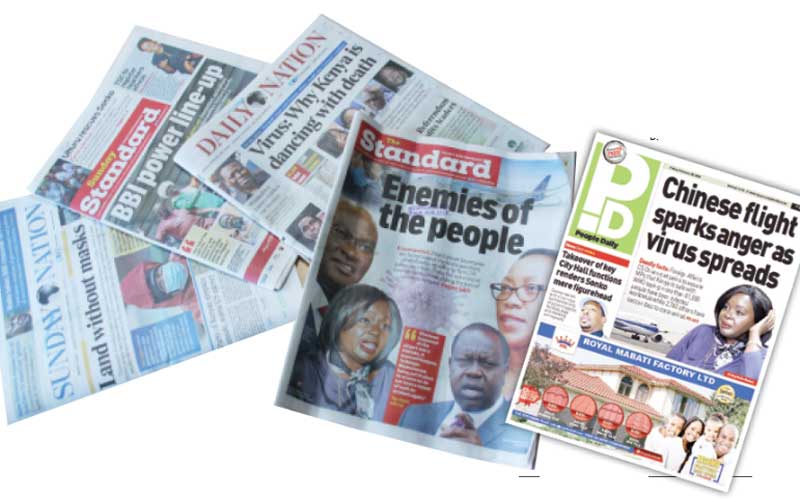 A professional association of editors has described the Media Council of Kenya (MCK) as a threat to media freedom in the country.

The Kenya Editors' Guild released a statement where it demanded an apology from the media regulator over recent statements accusing editors of breaching the code of conduct in the practice of journalism.

The statement followed MCK's claims that media houses have been writing misleading headlines on topical issues as well as providing slanted coverage of current affairs.

The industry regulator claims that its analyses of media content in the last few months has noted a pattern of screaming headlines without appropriate matching content.

But the editors' association said the MCK should provide evidence of "any study, period undertaken, terms of reference, methodology, authors and presentation of a report and recommendation" to back up its claims.

"In the absence of such evidence, it is clear that the MCK is out to control, is overstepping its mandate, and is clearly a threat to media freedom as enshrined in the Constitution of Kenya,” the editors' body said in a response signed by its president, Churchill Otieno.

"MCK is the regulator of media in Kenya, but this in no way gives it a right to interfere with editorial independence. The Kenya Editors' Guild is aware that the statement has caused a great deal of apprehension within the media fraternity. We ask MCK to provide any evidence on which its statement was based, or withdraw the statement and apologise to the media, journalists and Kenyans,” read the statement.

It continued: "It is sad, grave and alarming that MCK, a body constitutionally mandated to protect independent journalism, can resort to threats and blanket condemnation in clear breach of media freedom in Kenya."

The guild said MCK did not provide evidence of such instances or single out specific media houses guilty of breaches. It also did not indicate if it had received specific complaints on the matter, or if it acted on its own volition.

Under the circumstances, the association said, the council’s stand amounts to blanket condemnation of the profession and its role as a societal watchdog.

"We are perplexed that beyond generalised and blanket condemnation, MCK does not cite any example of breaches of the code of conduct complained of. Neither is there an indication as to the identity of any aggrieved party that may have lodged a complaint. We find this irresponsible and negligent at the least ... if indeed a specific complaint has been lodged, this deserves diligent attention through the laid-down procedures,” read the statement.

It continued: “These are very serious accusations. If upheld, they amount to severe indictment of the Kenyan media and questions the integrity and credibility of not only the media, but also editors and journalists."

While some journalists said the MCK position was purely 'advisory', others questioned the timing and alluded to a 'hidden hand' in the agency's sentiments.

The guild reminded the MCK that it is the creation of a long struggle for media freedom in the country.

"Therefore unfounded accusations are most unhelpful as they seriously erode the trust Kenyans have in the media as a key institution necessary for upholding democracy, good governance, the rule of law, promotion of human rights and other important values in society.”

The association also noted that, "over time, the regulator has been veering off its core mandate, seeking to impose itself as a government agency to control the media".

"The latest statement on purported breaches of the code of conduct reinforces such fears," it said.