Teachers Service Commission (TSC) recommendations in regards to the training of teachers have prompted debate, which is good and bad.

It is good because it is bound to instigate a discourse on training regime for teachers, which is rare but will allow us to have a fruitful conversation in shaping teacher training. Diametrically, the debate is bad because it has been hijacked by competing interests within the education system and beyond.

There is a real fear the debate is likely to be hijacked by the State in its attempt to implement tough conditions handed down by the International Monetary Fund (IMF) as pre-conditions for the advancement of loans. For key among the IMF recommendations, is the idea of restructuring the workforce, trimming down on staffing across government departments and cutting down the wage bill.

Besides, the import of this debate may also be lost as academic staff in universities silently jostle in a bid to get an upper hand in some of the subtle rivalries that exist. Teaching staff in sciences, humanities and the arts have been whispering things. They say the new policy gives them an opportunity to hit back at their colleagues in education who, they believe, have been occupying the buttered side of the bread.

At the core of this pettiness will be the little money that comes by way of assessing students on teaching practice or industrial attachment. Apparently, the movement of students from the domicile of one school/faculty to another will dictate a shift on which school/faculty controls the monies.

The above two, however, are minor issues. Let us get down to the crux of the matter.

Whereas they may have the mandate to make pronouncements on the kind of manpower they want, TSC neither owns nor is mandated to supervise universities. Pointedly, TSC does not have its own training schools for teachers. It depends on colleges and universities for manpower, and therefore it is inappropriate to make such earthmoving pronouncements unilaterally without sufficient engagement.

If anything, university programmes do not change based on the whims of individuals or organisations. It is important for TSC to be cognisance of the fact statutes that put universities into existence provide for procedures that need to be followed when changing programmes/curricula, or when introducing new curricula/programmes.

Importantly, TSC is supposed to have called Deans of Schools of Education in universities across the republic to a workshop. The commission apparently invited them to merely ‘report’ what they want to be done and not to consult them.

If the commission had sought a more sustained engagement, then the accusation that they are in a rush to force down impracticable and time-limited recommendations down the throats of the public and universities would not have arisen. Someone needs to tell TSC what it takes to review or amend a programme/curriculum in a university. It is even more complex when the issue is to introduce an entirely new programme/curriculum.

Today, there are several universities, which have Bachelor of Education curricula but do not have Bachelor of Arts (BA) and for some, Bachelor of Science (BSC) programmes. To be able to implement what TSC is proposing, these teacher training institutions will have to roll out relevant BA and BSc programmes.

Starting a new programme takes a meticulous procedure as dictated by various university statutes, Quality Management Systems (QMS) and other policies. The process ends with the Commission for University Education (CUE) ratifying the suitability of a programme and giving a green light for its implementation.

The initial point is a needs assessment to ascertain what the market needs. After this, the matter is discussed at the department level then escalated to the faculty board before handing it to the university senate. Specialists at a department then design the programme. At a later stage, stakeholders from the industry are invited to give their views as to the content and design of the programme.

In short, the process takes months, in some cases even years, before students can be admitted into a programme. It beats logic, therefore, what TSC has in place that will replace these procedures and processes, so that universities that do not have the programmes into which students are to be admitted, can pilot them beginning September this year.

Common sense will no doubt dictate that more public and specialist participation is needed if there are changes to be instituted. Clearly, the issue of changing training regimes is a matter out of TSC’s hands, and the best way to go about it is to engage training institutions, practitioners and specialists in education.

This should begin by carrying out research to find out if there are any deficiencies in the current training practices and how the same can be addressed. Claiming to want to have students delve deeper into content, yet going on to recommend introduction of a third subject is to retain – and complicate – the very deficiency TSC purportedly wants to address.

By imposing an implementation date to start the programme in September, TSC has demonstrated lack of understanding of how curricula are rolled out and reviewed in universities. Well, they have called them recommendations, but when the TSC begin issuing immediate timelines for implementation, then their document stops bearing recommendations and becomes a declaration.

When the news first came out, the proponents of the proposed measures argued that this will serve the country better because teacher trainees will have sufficient time to delve deeper into content areas, before undertaking one year to acquire a Postgraduate Diploma in Education (PGDE).

However, a closer look at the recommendations tells you TSC is not keen on getting teachers who are more versed with regard to depth of content. On this account, the commission defeats its own argument.

Little wonder, therefore, some read a hidden government hand keen to reduce the deficit of teachers, especially in secondary schools without employing more. This will inevitably cut down on the wage bill. Whereas today a teacher is expected to teach two subjects, the new measures will have a teacher take up three teaching subjects.

This clearly means the need for teachers will reduce as opposed to what otherwise would be the case if the subject load is retained at two. This is because, with a workload of three teaching subjects – up from two – two tutors will be enough to do the work that is currently being done by three teachers.

In other words, out of every three unemployed teachers, one is bound to remain jobless for the foreseeable future. It can be understood, therefore, that practitioners and commentators in education have read mischief in this action, which is meant to see the TSC help the government to implement IMF conditions.

It is impossible to talk about the depth of content in one breath, and increase the number of teaching subjects in another. If the argument is that with the current Bachelor of Education programme the TSC sees trainee teachers have no ample time to immerse themselves in content, how much worse is it bound to be with the introduction of a third subject?

In three years, what will make a trainee teacher studying three subjects better than one in the current training regime, which blends Education courses with the subject courses over a period of four years? It would have made sense if only TSC retained the requirement for two teaching subjects at two.

Besides, no consideration has been made for the obvious eventuality that a teacher required to teach three subjects instead of two will be an overly burdened employee. Hence, this will succeed in eroding the very element of quality in learning and teaching, which quality TSC purports to be vouching for in the proposed recommendations.

Several countries on the continent and beyond have a training regime similar to ours, with good results. The South African model, for example, requires teacher trainees to follow two paths just as it is in Kenya. Naturally, those who aspire to be teachers in South Africa are admitted into teacher training institutions to pursue Bachelor of Education degrees in Arts and Sciences. Those who do not take this path can do an Advanced Diploma in Education, after which they are registered by the South African Council of Educators and qualify for employment.

Practitioners and specialists in education have faulted the recommendation to banish Bachelor of Education training for what they term its capacity to water down the profession. Speaking in the wake of the news, Dr Wilfrida Itolondo of the School of Education at Kenyatta University stated that we will have people becoming teachers when in the first place they did not elect to be tutors right from the time they join university.

As such, we shall have graduates who will pick teaching as a career as if it were an afterthought, after weighing all the other options available to them. This country does not need any more people doing jobs they do not like in the first place.

Lecturers have dismissed likening the proposed training to medicine or law, arguing that any student who wants to be a lawyer or doctor, chooses it right from the first year provided that they qualify. The idea of having teachers, who may not have wanted to be teachers is therefore thought to have the hidden result of providing the country with a sorely motivated teaching fraternity.

If indeed TSC wants to address a gap by having teachers, who have more depth in content, then it should not be looking to increase the number of subjects a student is trained to teach. Unless the commission permits a healthy debate on this matter, then it will be justifiable for those concerned to claim TSC is allowing itself to be captured. It will be right to see the commission as an irony of an independent constitutional commission, working at the behest of government machinations and foreign bodies like the IMF.

— Dr. Wesonga is a lecturer in Literature at the University of Kabianga – Kericho

Kitui to get a spanking shopping mall after minister kicked out

At the heart of Kitui town on a one-acre piece of land, construction has started to put up a modern shopping mall, whose completion is set to change.. 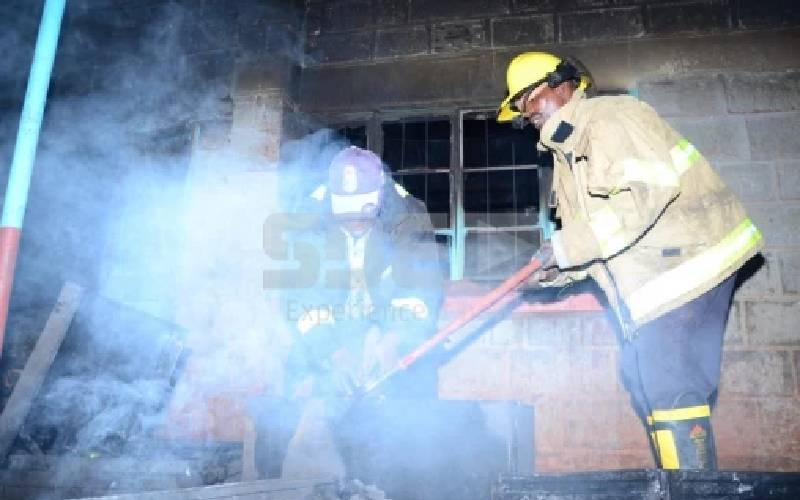 Speak Kiswahili in and out of class, Standard CEO tells learners
Feedback