This prompted for an intervention and a chopper arrived at around 10:24 AM at Mwingi Boys grounds in the morning hours after the examination had kicked off other parts of the country.

The chopper brought in the examination materials in two trips, making the first round to Nyanya Secondary School and Mukuthu both in Mwingi central.

The Mwingi Deputy Police boss Harriet Libere said that the chopper had to make a second trip to pick more exam materials to Kaunguni Secondary and Karunga adding that she was not certain of the time the exam was going to end after commencing late.

“The chopper has made the first trip at around 1024 hours and will be coming back to pick more exam papers for the affected schools”, said Ms. Libere. 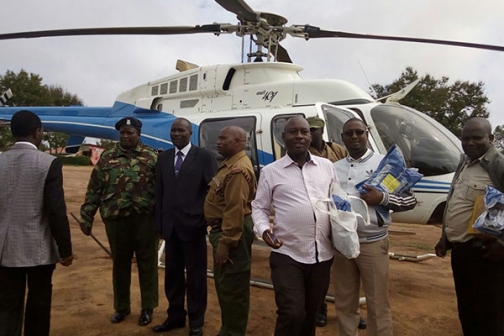 According to the Mwingi OCPD Patrick Okeri, the heavy rainfall that has been experienced in most parts of the lower Eastern has rendered roads impassable. He added that on Monday 13, police officers and exam officials were forced to walk to various schools after the vehicle they were using got stuck in a flooded river.

“The rivers are flooded thus making the schools inaccessible, on Monday police officers were forced to escort the examination materials on foot across the rivers to the schools to enable the candidates’ sit for the day’s papers “said Okeri

Oilers to renew rivalry with Nakuru at Prinsloo
Rugby
By Ben Ahenda
15 minutes ago
Mwalimu Rachel: How I built my four houses
Features
By Fay Ngina
20 minutes ago
IEBC does not answer to individuals- Chebukati
Politics
By Betty Njeru
43 minutes ago
Premium Uhuru names crucial power handover team
Politics
By Jacob Ngetich
44 minutes ago
.