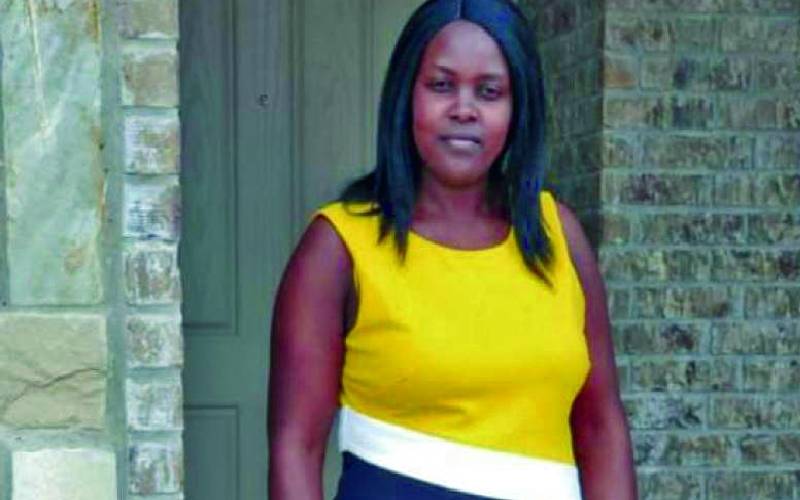 A US court has ordered the exhumation of the body of a Kenyan woman who allegedly drowned in a bathtub.

Dorothy Bosibori (pictured) died in her house in Texas last December 17, and was secretly buried by her partner, Obadiah Kinara.

Bosibori’s father, David Ong’era, moved to court to challenge Kinara's decision to bury the body without the family's consent.

Justice Brooke Allen of Tarrant County, Fort Worth in Texas, said the woman's remains should not be interfered with by the warring parties until the case is determined.

“After the exhumation, there is no person with the powers to direct the cemetery as to the disposition and whether or not an autopsy shall be performed,” the court ordered on March 4.

The jury trial to determine the person with the right to bury the body is scheduled to begin on March 23, stated Allen in her order issued on March 3.

The family also wants an independent autopsy conducted to establish the cause of Bosibori's death, and to be allowed to accord her a befitting send-off.

The woman’s family cast doubt on the first autopsy conducted by the Tarrant County Medical Examiners office, which ruled out foul play.

"The only time I saw my daughter was on December 16. I was never allowed to view her body. All family members, including her children, were barred from the burial ceremony," said Ong'era during the hearing of the case through zoom.

But Kinara argued that Bosirobi was his wife and he had the right to dispose of the body. He accused Ong'era of fighting him because of his partner's property.

In his affidavit, Ong’era has also questioned Kinara's motive to bury his daughter without the consent of her family.

Bosibori, a mother of six, reportedly drowned in a bathtub and was buried on December 28, 2020 by her partner.

Ong’era said Kinara had no right to bury his daughter’s as their union was not legally recognised. He accused Kinara of isolating them from burial arrangements.

“We couldn’t view the body at the hospital because we were told it was in the examination room. We couldn't also visit her house as it was a crime scene,” said Ong’era.

Bosibori's parents rushed to the hospital where she had been taken and on arrival, a doctor, a nurse and a chaplain informed them that she had died.

“We went to Kinara’s house and we could not discuss anything about her burial,” he said, adding: “We later spoke to him about the funeral and from that day he blocked us."

Ong’era later received a call from the chaplain saying the body could be moved from the examiner’s room to a funeral home.

“When we went to the hospital, we did not find the body at the examiner’s room. We tried to call Kinara, but we could not reach him as he had blocked us,” he claimed.

Three national identity cards were found on his body after he was lynched when the pistol ran out of bullets.