Ruto, Mudavadi gang up against Raila over House leadership 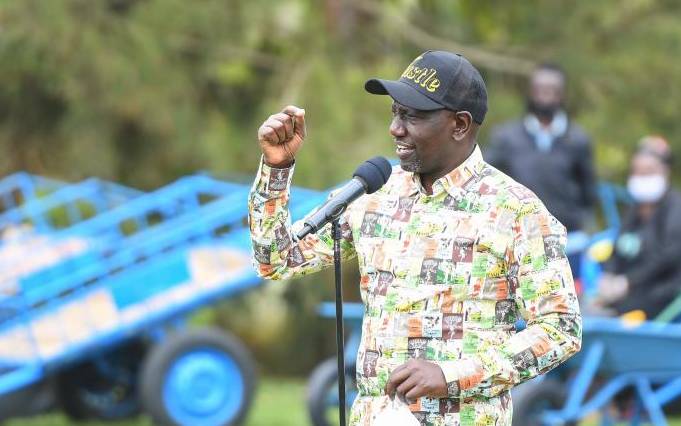 Allies of Deputy President William Ruto (pictured above) have sensationally claimed that the Orange Democratic Movement (ODM) is now running the government and must relinquish its Minority party positions in Parliament.

Ruto’s camp now wants the plum positions taken up by MPs in Musalia Mudavadi’s Amani National Congress (ANC) who would play the opposition role in both the National Assembly and the Senate.

Soy MP Caleb Kositany and his Aldai counterpart Cornelly Serem yesterday announced plans to write to National Assembly Speaker Justin Muturi to make a ruling on whether ODM should continue holding the positions after “joining the government and taking up Majority side slots.”

The two MPs declared that they were ready to move to the High Court to seek an interpretation of the current setup of Parliament and whether ODM should continue acting as the opposition.

“We have resolved to write to Speaker Muturi to give a ruling on whether we still have a Minority (parties) coalition in the current political setup. ODM is basically in government and should not continue drawing benefits of the Minority party,” said Kositany.

He continued: “ODM is running the government and Kenyans cannot expect them to oversight (sic) the excesses of the same government. The only party which is still practising opposition is ANC. It would only be fair if they are allowed to occupy the seats.”

Similar views were expressed by Serem, who said they are ready to take up the battle to kick out ODM MPs from Minority leadership positions as well as oversight committees held by the opposition.

“We are first going to seek a ruling by the Speaker. If we don’t succeed, then we will proceed to the High Court for interpretation,” Serem said.

Nakuru Senator Susan Kihika said the current set-up in parliamentary leadership would upset the checks and balances stipulated in the Constitution.

“There is no clear distinction between the Majority and Minority leadership,” said Ms Kihika.

“If the problem is MPs allied to Tangatanga, they should have remained faithful to the spirit of the party by replacing those posts with Kieleweke members. They are hell-bent on muzzling all institutions, including the Judiciary, assisted by handshake proponents.”

But in a tweet, Ruto urged his allies to work with the newly constituted House committee leadership.

“With the changes in parliamentary leadership, including committee membership and leadership, now concluded, I urge all MPs not to be divided but work together in serving the people.  Col.3:23, whatever you do, work at it with all your heart, as working for God, not human masters,” said Ruto.

At the same time, ANC deputy party leader Ayub Savula said the party was ready to discharge the oversight mandate.

“ANC is the only standing opposition party in Parliament after ODM party leader Raila Odinga entered a cooperation arrangement with President Uhuru Kenyatta.

“If ODM signs an agreement with Jubilee, we will kick them out of NASA and officially take over the Minority leadership immediately,” said Savula.

The Lugari MP, however, distanced ANC from Tangatanga, saying the party cannot work with Ruto’s allies for going against Uhuru.

“As at now we have not discussed taking up the positions but we are ready. It should be clear that we cannot follow Tangatanga. In fact, it is good they were kicked out from the committees,” he said.

But Raila allies dismissed the latest move by Ruto allies as “a wishful and desperate attempt” by the demoted Tangatanga lawmakers and urged the Speaker not to entertain “hot air” in the House.

The Raila camp insisted that ODM has not entered into a post-election coalition agreement with Jubilee. The MPs further argued that Parliament’s Standing Orders do not bar any member from contesting and chairing any of the House committees.

According to the MPs the Standing Orders only reserve leadership for members of the Minority coalition in oversight committees: PAC, Public Investment Committee (PIC) and Implementation Committee.

“We have not signed any memorandum of understanding with Jubilee Party or deposited any signed instrument at the Office of the Registrar of Political Parties. We are not part of the Executive,” said Mbadi.

The Suba South MP said those opposed to the Minority side chairing some committee should read the procedure and framework of how Parliament operates, citing articles 108 and 109 of the Constitution.

“There is nowhere in law where the chairpersons of committees and their vice are reserved for the Majority side. The practice since 2013 is that Jubilee had a monopoly because they had the numbers and pushed this through.

“Kimani Ichung’wah was the Budget and Appropriations Committee chairperson. Who elected him? Similarly, in the last parliament, Mutava Musyimi chaired the same committee without any election, but the tyranny of numbers,” Mbadi said.

Junet argued that committee leadership is won based on the strength of the candidates and their ability to marshal numbers, adding that it is not a party affair.

“The purpose of all members irrespective of the parties taking part in an election is to give everyone an equal opportunity to contest. Even Tangatanga members, if they can marshal the numbers, will be elected chairpersons of the committees,” he said.

Mutula argued that the Executive does not sit in parliament. “As such, Parliament’s work is executed in a bi-partisan manner. Since the Majority side remains the same, there is no contradiction at all,” he said.

Wandayi challenged Ruto’s allies to quit Jubilee and seek re-election under another party if they were keen on taking up the Minority slots.

“These are acts of desperation by the de-whipped members because such argument can only hold if ODM entered into a coalition with Jubilee. As far as we are concerned, there is no such arrangement,” said the Ugunja MP.

“Parliamentary committees hold elections and anyone is free to contest. Standing Orders do not bar anyone from chairing a committee. It is baseless to claim that ODM is part of the Executive by virtue of holding committee positions,” she said.

Osotsi said the Speaker can only make a pronouncement on such a matter on an existing document of a coalition between Jubilee and ODM.

“It will go nowhere. The only document the Speaker can rely on is a coalition agreement which is not there,” he said.

Elgeyo Marakwet Senator Kipchumba Murkomen said it was “unfortunate that Jubilee, which controls 60 per cent of both Houses, is now looking rudderless.”

“It looks confused like a sheep without a shepherd and now depending on the benevolence of an opposition party. The purported rewards to NASA are so cosmetic and are not commensurate to the burden they now shoulder in the handshake administration.

“Worse, still, parliamentary democracy is being sacrificed by the opposition party in exchange for morsel and crumbs from the big man’s table,” said Murkomen.

The case was filed back in August 20, 2015, by Centre for Justice Governance and Environmental Action Executive Director Phyllis Omido.

By Wellingtone Nyongesa | 3 hours ago