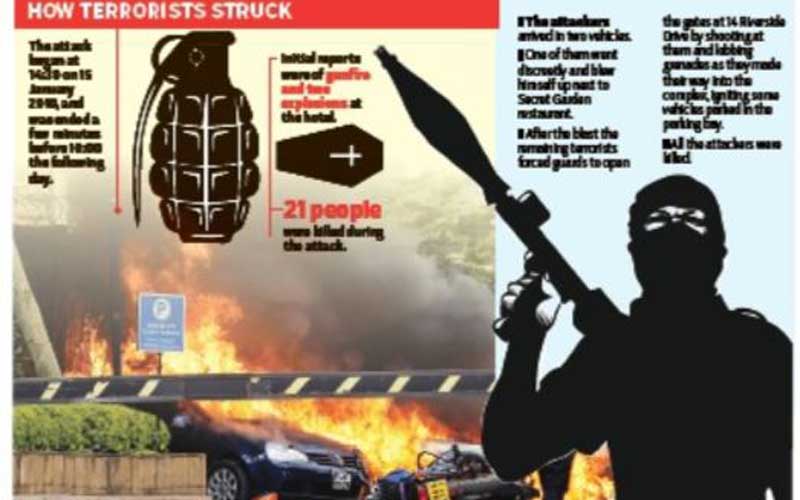 Kenyan investigators are in South Africa to pursue leads that have linked a Sh2.3 billion money transfer from a bank in Cape Town to January this year’s 14Riverside Drive terror attack in Nairobi.

Part of the money that was sent on diverse dates, investigations reveal, was used to set up operations in different parts of the country that were ultimately aimed at planning the bloody attack that led to the death of 21 people.

The investigators focus in Cape Town will be tracking down the people who sent the money and their motive. Information has been obtained from the South African Government, to finger recipients and beneficiaries of the terror funds.

Yesterday, sources said investigators are keen to interview one Kenyan who lives in Cape Town and whom the police have identified as one of the people who sent the money to Kenya through a local bank. An employee of the bank is currently facing terror-related charges in a Nairobi court.

The investigators have also identified another Kenyan, who is said to be a refugee in Pretoria, as part of a terror sleeper cell and a major financier of Al Shabaab.

The visit to South Africa is expected to lift the lid on what has been described as an intricate money laundering network used by the terror group to move money across borders and identify individuals and companies used as fronts by Al Shabaab operatives who are on several watch lists, locally and internationally, with the aim of freezing assets and bank accounts thought to have been purchased through these funds.

Investigations believe that the January 15 Riverside attack which claimed 21 lives was financed through a web of money transfers from Cape Town, through a popular international money transfer service, to a Kenyan bank, before being withdrawn via mobile money at various outlets.

One of the leaders of the Riverside attack, investigations show, had registered 70 mobile money transfer till numbers from which he and his accomplices would withdraw money for purchase of weapons, pay for surveillance of intended target, purchase or hire vehicles to move around and pay for rent in the places they lived in and possibly bribe authorities.

The team left the country last Sunday and was expected back into the country on Friday. Already, Sunday Standard has established that the investigators have held several meetings with South African police.

In a previous expose on Al Shabaab by this paper, investigations revealed that one of the biggest local recruiters for the group was a man from Malindi, with vast business interests in the South African city.

The respected businessman relocated to South Africa in search of asylum after members of an Al Shabaab cell composed of his former recruits was tracked down and killed by ATPU officers in January 2016.

The four-man cell was at the time accused of a spate of violence in Mombasa, including the killing of a police officer. The mother of one of the individuals gunned down told Sunday Standard that at the time, they wanted to surrender after training in Somalia. They had a Sh2 million bounty on their heads.

The police hope that the information obtained from South Africa will help them secure a conviction in an ongoing terror-related case.

“We believe we can also get intelligence which will help us in future in preventing another terror attack,” said a source familiar with the probe.

The scope of the investigations is to understand the faces behind the huge sums of money wired to the country through a local bank and which the police believe was used to fund the terror attack.

In Nairobi, the investigators want to use the information obtained from Cape Town to hunt down individuals who have enriched themselves from the proceeds of crime.

On February 18, anti-terror police chief Nyale Munga, wrote to Central Bank of Kenya Governor Patrick Njoroge to brief him on how terror suspects used a local bank and a telco operator to wire cash from South Africa.

The ATPU chief told Njoroge that two agents were used by the suspects to receive more than Sh70 million.

The investigators said they were probing how Sh9 million used to finance the DusitD2 terror attack was sent through mobile money service.

“We will go for each and every person from the banking sector to the mobile money transfer networks that were lax in their work,” DCI director George Kinoti Kinoti said at the time.

Initial investigations had revealed that one of the terror suspects received Sh9 million from South Africa through mobile money over three months. The cash was then sent to Somalia where Al Shabaab is based.

The suspect had 52 M-Pesa agent accounts with 47 of them registered between October and December last year, each with a SIM card. He used different IDs to register the SIM cards.

The financial system used by the Al Shabaab involves a wide variety of actors, both internal and external financiers that have been bankrolling the terror group either directly or indirectly.

Notably, Al Shabaab’s financing draws from a wide pool including state sponsors, the Diaspora, charities, piracy, contraband business and extortion in Somalia. Sympathisers in the Diaspora wire money to relatives as well as terrorists either directly or indirectly through relatives that cannot be linked to funding the terror group.

In the Riverside case, Kinoti said money transfer operators and banks failed to raise sufficient alarm over the funds suspected to have financed the terror attack.

Know-Your-Customer prudential guidelines are supposed to be employed at every stage by every link in the chain. Telcos are required to vet all huge transactions known as super agents, while banks are also bound by the same regulations of know their customers.

The Central Bank supervises banks through its supervision department.?

Judiciary should initiate talks on arbiter role in poll disputes

By Osinde Obare | 57 minutes ago

By Kamore Maina and Brian Okoth | 3 hours ago

Empty promises as locals drown in river of death
;
Feedback