By Michael Chepkwony | 3yrs ago 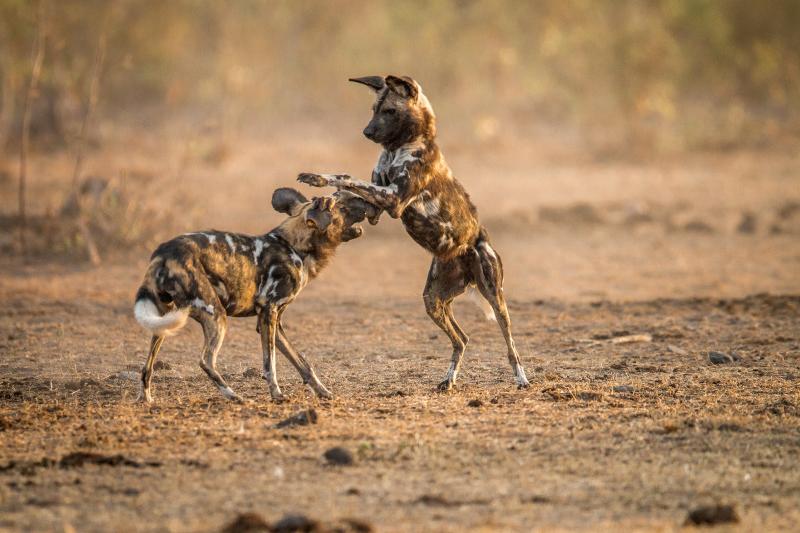 According to African Wildlife Foundation (AWF), there are approximately 6,600 wild dogs remaining in the wild in Africa, a number that makes the carnivores vulnerable to extinction.

The International Union for Conservation of Nature (IUCN) listed the animals as endangered in 2016.

The population is scarcely distributed in Kenya, Tanzania, Zimbabwe, Botswana, northern Mozambique and South Africa among other countries in Africa.

The canines face threat of extermination from diseases such as rabies and canine distemper as well as attacks from other predators such as lions and hyenas.

On Tuesday, conservationists in Kenya raised alarm that wild dogs have been dying in dozens in the country due to the viral canine distemper.

The disease affects the central nervous system, respiratory, gastrointestinal and even the membranes of the eyes of domestic and wild species of dogs.

An affected animal is known to exhibit symptoms including persistent coughs, diarrhea, vomiting and fatigue.

In Laikipia’s ecosystem alone, over 40 wild dogs succumbed to the disease between June and December last year on what is suspected to have been spread by domestic dogs.

“The disease is transmitted from infected domestic dogs that contract the virus yet remain immune against it,” said Dr Mathew Mutinda, a wildlife veterinarian at Lewa Wildlife Conservancy.

Dr Mutinda said the domestic pets had higher immunity and were therefore less likely to succumb to the disease and instead continue spreading the virus to the vulnerable wild dogs.

He said unless the domestic dogs near the conservancies were vaccinated regularly against the disease, the wild species will continue dying from the disease.

“The most effective control is vaccinating the domestic dogs because the wild ones are hard to manage since they are in the wild,” Dr Mutinda said during the Annual Carnivore Research and Conservation Conference at Kenya Wildlife Headquarters in Nairobi.

Dr Mutinda said the vaccination of domestic dogs in the recent past at Laikipia ecosystem had proved a success.

“We started to vaccinate the pet dogs to control infections to wild dogs and it worked. The deaths reduced by a significant number. It is the most reliable method,” said Mutinda.

Despite the effort, he revealed that the rate at which domestic dogs were reproducing was so high and demanded frequent vaccination.

“You will vaccinate dogs today and within a few months there is a large new flock that requires vaccination too,” he said

The veterinarian also observed that hyenas too play a significant role in the disease infection cycle. The hyenas drag diseased carcasses while feeding on them and in the process spread infections.

“Hyenas do not succumb to the disease because they have some immunity against it,” he said.

Dr Mutinda was presenting a conference paper with his co-presenters; Annie Cook and Dedan Ngatia titled: Rabies and canine distemper outbreak in wild dog and domestic carnivores in Laikipia ecosystem of Kenya.