Details of the Sh100 billion Nairobi bus and rail project 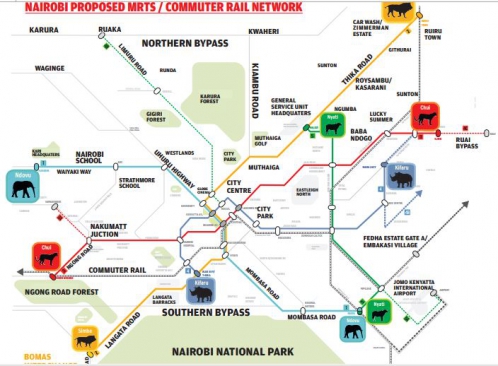 The rail and road system-hyped as the long-sought solution to Nairobi’s public transport mayhem, aims to ease urban mobility and make commuting a less stressful experience for the over 2.6 million people currently entering or leaving the city daily. The number is projected to grow to 5 million by 2030.

The project could signal troublesome economic times in future business for matatu business which is a significant economic establishment today.

Introduction of modern buses that will, however, use dedicated lanes in and around the capital city is expected to instil order and comfort in a transport sector long synonymous with anarchy.

A masterplan for the project estimated to cost well over Sh100 billion mirrors the dreams of most Kenyans. Initial studies done two years ago had estimated the cost of the implementation of this master plan to Sh89 billion but the budget is expected to tilt upwards due to the need to accommodate growing infrastructural needs.

The Bus Rapid Transit (BRT) system, which will dominate the first phase of the project set to be on top gear in 2017, will have five interconnected lines named after Kenya’s Big Five animals; Ndovu (elephant), Simba (lion), Chui (leopard), Kifaru (rhino) and Nyati (buffalo). They will be used by buses to ferry commuters to all key city suburbs.

Using Ndovu line, a commuter will travel from Kangemi to Imara Daima area using one ticket. The line, to be built along Waiyaki Way and Mombasa Road, will have other drop off and pick-up stations at ABC Place, Westlands, University Way, Kenyatta Avenue, Haile Selassie Avenue, Makaburini, Nyayo Stadium and near General Motors. It connects with other lines at some of the stations.

Simba Line will serve commuters from the Bomas Interchange near the Bomas of Kenya to Ruiru town via the city. It will run along Langata Road and Thika superhighway. On Chui Line, commuters will have the luxury of riding one bus from Njiru area in Embakasi to Jamhuri Showground.

The line, running along Ngong Road, Juja Road and Komarock Road, will have major stops at Dandora, Kariabangi and near Gikomba market. Phase II of the MRTS will see the line extended to Ruai and Kawangware.

The highly populated Eastlands zone of Nairobi will be served by Kifaru Line, which will run from Mama Lucy Hospital to T-Mall via the CBD. The line mainly runs along Jogoo Road, with major stops at Donholm, City Stadium, Bee Centre and Nairobi Hospital and Moi Avenue.
Nyati, the shortest of the five lines, will link Balozi Estate near GSU headquarters to Imara Daima via Outering Road. Phase II of the project will see the line extended to Jomo Kenyatta International Airport (JKIA).

As part of Phase I, which is set to be rolled out between 2018 and 2030, commuter rail services will also be introduced linking Embakasi to Ruiru town as well as Jamhuri Showground. It will use the existing rail network, with a scheduled extension to JKIA in Phase II.

“Once implemented, transport in Nairobi will never be the same again,” says Michel Fest, Eastern and Southern Africa director at Gauff Ingenieure, a consulting and engineering company.

The firm conducted harmonisation study that developed a consistent network of all MRTS corridors, and which received government approval last year.

The MRTS will have various financiers, among them the World Bank, the European Union, the African Development Bank and the Japan International Cooperation Agency (JICA). Fest says the BRT is projected to initially have 600 buses plying the five lines.

The Kenya National Highways Authority (KeNHA) has already embarked on the development of the bus transit infrastructure. Last week, the authority advertised for a consultant to prepare documents for design and build concept of the section between Likoni Road and James Gichuru Road.

“For the section between James Gichuru to Rironi, tenders were opened on July 31st 2014 and are currently under evaluation. For the section between JKIA to Likoni Road, tender documents have been forwarded to the World Bank, who are the financiers. We are now awaiting a ‘no objection’ approval for us to tender,” revealed Charles Njogu, the KeNHA corporate affairs manager.

Njogu allayed fears that the upgrade works on major roads in the city could lead to unmanageable traffic chaos.

“In every project, we have a new way of doing things and we will ensure traffic flow is largely unhindered. We are going to have traffic diversions and engage in a massive sensitisation campaign. The by-passes will also come in handy in easing traffic flow,” he said.

With the proximity of Kiambu, Kajiado, Machakos and Murang’a counties crucial to the MRTS plan, leaders from the four counties, alongside their Nairobi counterpart, in October last year signed an MoU giving the project the greenlight.

This paved way for the establishment of the Nairobi Metropolitan Area Transport Authority-the body that will oversee the implementation of the MRTS- last February.

Phase 1 of the project, which is expected to be on top gear in 2017 and be in full operation 2030, will give priority to the bus transit system network because it is easier to create. The bus transit routes will then determine the rail system. Phase II is set to begin after 2030.

By Julius Chepkwony | 55 minutes ago

By Willy Lusighe and Betty Njeru | 1 hour ago