Politicians kept off the funeral service of the two youth were killed during a political fracas at Kenol, Murang’a two weeks ago.

The Inter-denominational and cultural service was held at Mount Kenya University Graduation Square in Thika.

Christopher Kariuki, 21, and Peter Mbothu, 15 were killed after chaos erupted between two rival political factions, few minutes before the arrival of Deputy President William Ruto at a fundraiser at AIPCA Church in Kenol town, Murang'a.

The elders who led the service in collaboration with the church leaders said they resolved not to include politicians in the service citing circumstances under which the two young men lost their lives.

Only Kiambu Governor James Nyoro and his predecessor William Kabogo who were given chance to address the mourners.

“We have to respect the families of the deceased who sought to have no politician address the mourners,” said Stephen Karau, a member of the Kikuyu Council of Elders. 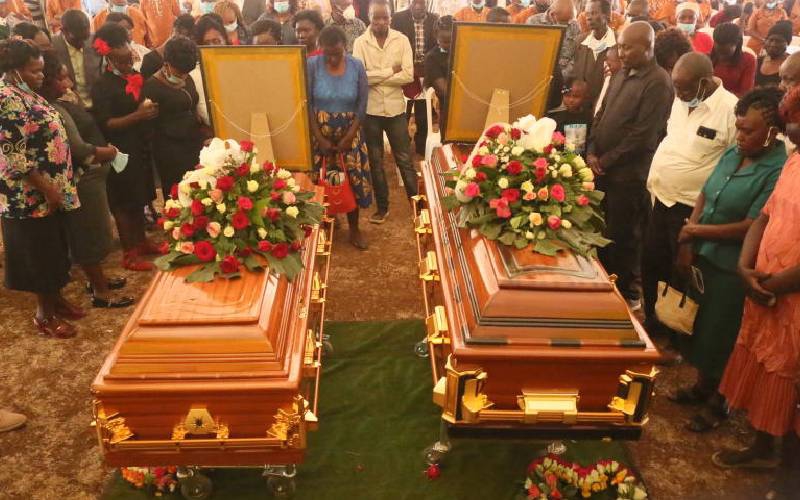 Members of the Kikuyu Council of Elders present at the service distanced themselves from their colleagues who visited ODM leader Raila Odinga in his Bondo home saying they were not sent by the council.

The group of over 500 people from Kikuyu endorsed Odinga as Mt Kenya’s preferred presidential candidate for the2022 election.

Council of elder’s patron Kungu Muigai said the team led by Peter Kenneth and David Murathe did not represent the council of elders.

The service was held at Mount Kenya University Graduation Square, in Thika.

Families of the two young men killed in the Kenol chaos have called for arrests and prosecution of the persons responsible for the murders.

By Clement Masombo | 4 days ago