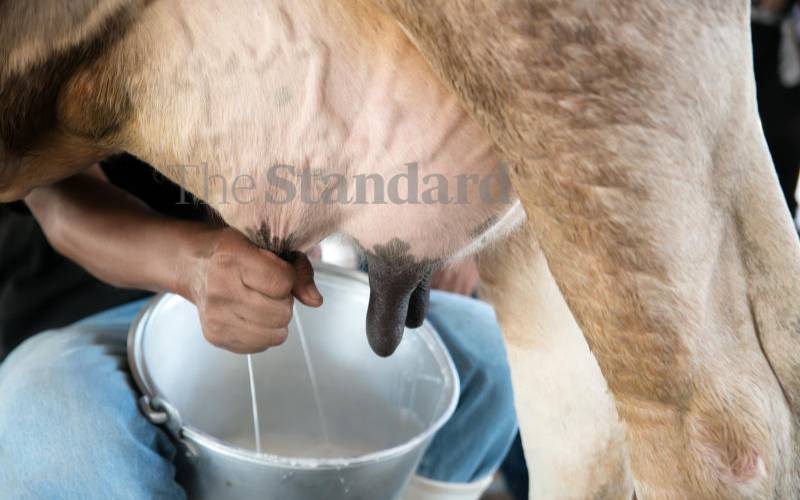 The dairy industry in Kenya is one of the most lucrative within the agricultural and manufacturing sectors. According to the Kenya Dairy Board, the industry contributes an estimated four per cent of national GDP, 14 per cent of agricultural GDP, and 44 per cent of livestock GDP. It also provides livelihoods to at least 1.8 million smallholder farmers.

But on the converse, the dairy sector is also one of the leading contributors to Green House Gas emission within the Agriculture sector, contributing to negative effects of climate change.

Somewhere in Nyambari, in the Kiambu County’s uplands, stands Canaan Factories Limited (CFL). It is a modern milk processing plant christened Alfresh-CFL, and here efforts to use modern technology to process milk while at the same time being conscious of the environment is key. The fight for a share of the lucrative milk market, says Alfresh-CFL General Manager Ramaji Prasad, has not taken away the “conservation consciousness”.

The Sh1 billion equipment, an amalgamation of machines from Germany, Italy, India, China and Kenya, has capacity to process 80,000 litres of milk per day. “Sourcing of different machineries from around the world was to ensure the processing plant produces global quality standard products,” says Mr Prasad.

Being close to the dairy farmers has also ensured the community gets best prices for their milk.

Kiambu County has recently matched the rising demand for processed milk, driven by a growing middle class and its proximity to Nairobi, which has witnessed increased population, courtesy of sustained rural-urban migration.

The equipment, while applying cost-saving means, has reduced farmers’ worries over high input costs and low product prices. More farmers benefit from extended support by the facility on the best ways of rearing dairy cows.

In rearing the dairy cows, the farmers are trained by procurement and extension officers on higher milk production from every cow and on how to preserve milk in cold chain to retain its wholesomeness.

The procurement team collects milk from farmers everyday, so that all is sold even during holidays. “The milk is procured from the doorstep of the farmer by company representative. It is weighed in front of the farmer and a card indicating quantity and other key details collected given,” Mary Saka, the Head of Quality and Production at CFL told The Standard.

The milk from farmers is transported in small vehicles to a bulk chilling centre, where it stays below 4°C to avoid growth of microbes. “The milk is also tested for certain quality checks before procurement,” Ms Saka says.

According to Saka, this encourages conformity with excellent dairy farming practices by farmers, which also ensures consumers get clean, pure and wholesome milk products.

Improved access to extension services and the farmers’ growing confidence in the weighing and payment processes have led to increased enthusiasm towards dairy farming.

Lucy Wanjiru says her fortunes changed when she started to supply milk to Alfresh-CFL in 2019. Having started off with one cow, whose milk could only sustain home consumption, Wanjiru’s story now reads like that of hundreds of other such farmers in Kiambu, “who saw the light earlier”. Wanjiru relied on napier grass to feed the cow. She complemented this with high protein commercial meals like maize and wheat bran, cotton seed cake, soybean and fish meal.

But that would be short-lived, as the volatile commercial feeds became expensive, to Sh2,600 for a 90kg bag, up from Sh1,500 in 2018. “And I could only feed my one cow for a week with this. I knew I couldn’t afford over Sh10,000 a month on just one cow when I had other competing needs. I was prepared to sell it,” she says.

He, however, lacked milk buyers, particularly those that could pay well and promptly. He was vulnerable to exploitation. He would sell the milk to local traders and brokers, for prompt but little pay.

“It only took me two months before my fortunes turned. Your milk is procured from your doorstep by CFL representatives… The milk collected from the farmer between first day of the month to the fifteenth is paid for via a bank before the twentieth day,” says Kariuki, who now owns 15 dairy cows.

Back to conservation, there is a lot the dairy farmers were already doing, and there is more that they learn from the Alfresh-CFL extension teams.

For sustainability purposes, the farmers have to be conscious of the air pollution caused by the cow dung smell. And to reduce that, one of the mentions is that the farmers get taught to bury the cow dung instead of throwing it on the earth surface.

Farmers’ use of the manure has been hailed for increased crop yield, yet this they have not waited to be taught. Cognizant of the fact that they are situated in a county that has suffered the brunt of urbanisation, courtesy of its proximity to Nairobi and other counties, Alfresh-CFL now says it would like to encourage tree planting, starting with itself, and spreading the gospel among the farmers it works with.

But tree planting alone is not good enough in reduction of GHG emission. The Alfresh-CFL, at the plant, also targets to increase its shift to more renewable energy such as solar.

“Our energy consumption is relatively very low, as we work with the most modern technologies,” says Naftaly Kiogora, the extension manager.

He says they want to be counted among the world’s environment conscious firms that have contributed to “the big shift”. “The use of green energy is expected have to rise to 50 per cent by 2050, if countries are to meet their climate commitments,” he says.

Despite the fact that Kiambu and its surroundings does not suffer acute water shortage, Alfresh-CFL still recycles the water it uses within the plant.

Several other farmers are gaining interest in biogas production, which is a cleaner and more renewable energy source and a less poisonous one as compared to using firewood, charcoal or kerosene.

Kiogora added that they have one of the best effluent treatment plants and disposal system. “Treated water is the best for farming, and we do it,” he said.

Sasini has started paying out dividends to its shareholders after recovering from a three-year loss streak.

Banks have unique ability to drive traffic towards a loaned enterprise through a business ecosystem.

By Vivianne Wandera | 25 days ago