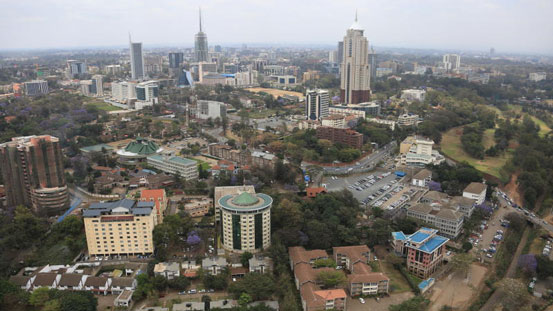 Last week, I found myself reading a piece by Sam Sturgis, a writer with Rockefeller Foundation’s Informal City Dialogues. It was penned four years ago, but it aptly describes the current state of Nairobi’s Central Business District.

“Wooden tables filled with everything from bras to hairpieces line the off-ramp, with eager hawkers, repairmen and car washers waiting patiently behind them. This is one of the first things drivers entering downtown Nairobi see these days, and in many ways, it speaks to the larger economic shifts that are changing the face of Nairobi’s CBD.”

He continued: “Big companies are leaving the city’s central business district, relocating to newly accessible suburban neighborhoods; the city’s informal workers, meanwhile, are flocking in. This has had the effect of turning the CBD into a stop-over point for commuters living in residential areas on one side of town, whose offices are now relocating to the other.” A Nairobi scholar termed this shift as “business suicide.”

Some people may argue one way or the other with the above sentiments, but there is no denying the fact that the days when the city centre used to sparkle are long gone. Gone too are the days when top business honchos hopped from one boardroom to another within the CBD.

While experts and global players in the real estate industry continue to give a thumbs up for Nairobi as the city to watch in the continent, such sentiments are usually directed to newer development nodes such as Upper Hill, Kilimani, Kileleshwa and Westlands.

In its 2017 Nairobi City Report, real estate investment advisory firm JLL states that decentralised nodes are gaining traction as demand moves out of the “heavily congested and dilapidated” CBD to better quality accommodation in emerging business nodes such as Westlands, Upperhill and Gigiri.

“Multinational companies such as Coca Cola, Standard Chartered Bank, GE and World Bank have all made their corporate address in these prime nodes while older Grade B office space in the CBD remains largely occupied by smaller local corporates,” says the report. Following in the grand exodus from the CBD are some of the country’s top insurance firms such as Britam and UAP Holdings. The two firms are behind the two tallest structures in Kenya at Nairobi’s Upper Hill.

While the moneyed in society used to flock designer clothes shops along Kenyatta and Moi Avenues, they now prefer spending time in far flung malls such The Hub, Two Rivers, The Junction and Garden City among others.

This is in contrast to major cities around the world where top businesses would pay a premium to be based in the city centre. From London to Tokyo to New York, large financial corporations and other knowledge intensive business services are always angling for space within the CBD.

In the CBD, such firms are said to benefit for shared infrastructure such as roads, rail and good lighting. But in Nairobi’s case, the lack of these amenities are the key reasons why big businesses are giving the CBD a wide berth.

Experts in the local built industry think our city centre could have been a victim of its own success.

Eric Loki, an architect with Planning Systems, the firm behind some of Nairobi’s skyscrapers such as Fedha Towers, Lonrho House, and I&M building says as the CBD became the preferred location for big businesses, rents went up and so did land prices. In addition, Loki says infrastructure in the CBD continues to be under immense pressure from vehicular and human traffic. In any case, there was little space left for infrastructure expansion.

“The CBD is primarily a commercial zone where every structure must make economic sense. However, it has become difficult for developers to pay for the exorbitant prices of land in the CDB and still make good returns on such investments. The drive has been to look for land elsewhere,” he says.

The alternatives to the CBD are Upper Hill, Westlands, parts of Kilimani and areas around Ngong Road. Policy shift within the city has been instrumental to the corporates’ move away from the city centre. “It was a relief to many corporates when the city government rezoned a number of formerly, low density residential areas to commercial zones. The upgrade of infrastructure in the new commercial zones also came as a boon to the new businesses,” says Loki.

According to the JLL report, a huge portion of the 191,000 square metres of office space completed in 2016 was concentrated in Upper Hill and Kilimani. The high amount of office space in these areas has seen rents stabilize, further attracting more medium level businesses that formerly occupied the CBD.

On the flipside, businesses that could only dream of plying their trades in the city centre got a new lease of life by occupying former office buildings.

A number of buildings in the CBD converted to what are termed as ‘stalls’ – small cubicles selling everything from phones to toys. Monthly rents range between 10,000 and Sh40,000.

“I would never have imagined having a shop in the middle of the city just ten years ago,” says Mary, the owner of a tailoring shop. For people like Mary, their hope is that the move by big businesses out of the city centre is sustained, thus keeping rents at an affordable level.

Manufacturers want an alternative waste management system to contain menace instead of a total ban.