Every story told about Saudi billionaire Adnan Khashoggi who died last week speaks of opulence. For the umpteenth time, Kenya finds itself deep in Khashoggi’s fairy tale, courtesy of the imposing house he built on the 90,000-acre Ol Pejeta Conservancy in Laikipia.

The house, which cost a little over $7 million (Sh721 million today) at the time was built between 1978 and 1981 after Khashoggi acquired the ranch from British aristocrat Lord Delamere.

In fact, the rich history of Ol Pejeta is one reason visitors flock to the house. Ol Pejeta has changed ownership several times. From Lord Delamere, it went to Roussel who was father-in-law of Christina Onassis and later to Adnan Khasoggi. Ol Pejeta House was only one of the many pieces of real estate investments under Khashoggi’s name. The tycoon had 12 homes spread across Cannes, Paris, Madrid, London, and, of course, his favourite hideout in Marbella, southern Spain. At some point, AK, as he was popularly known in business circles, owned Mount Kenya Safari Club. Still, these were little investments for a man who could spend $300,000 a day or Sh30.9 million at current exchange rates.

Khashoggi shuttled all the seven continents of the world and Ol Pejeta House conveyed global architectural concepts as well as the African traditional setup.

The building takes the form of a local ranch house with a tiled roof, a style that was in vogue during Kenya’s colonial era. The wood-clad exterior blends in well with the surrounding African bush. It gives an imposing view of Africa’s second highest peak, Mount Kenya.

The man was shrouded in secrecy, a fact that becomes apparent through a number of interior fixtures. There is a secret door in the closet, perhaps to serve as an escape route if the need arose. Such secret escape routes were common in his house designs. 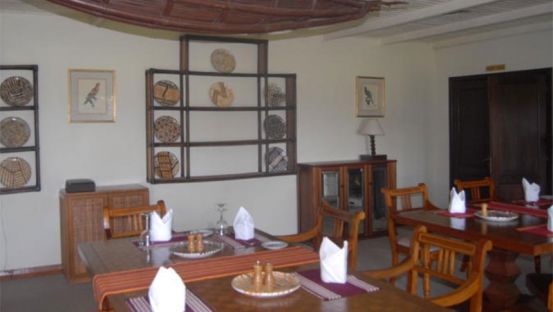 His former expansive home in Marbella has a padded door, which is still shut. No one knows what lay on the other side as no one has ever opened it since Khashoggi’s days there, prompting one writer to quip that whatever lies there is “something unknowable”, something perhaps only Khashoggi had ever really known. However, it is the two bedrooms in Ol Pejeta – the Master and the Mistress – that get everyone who visits the house talking. Each bed measures 3.5 metres by 3.5 metres, kingly by any standards. So big are the beds that eight men can sleep on each comfortably – and have room to turn.

The joke here is that since the house almost straddles the equator, it is possible for one person to spend the night in the northern hemisphere while another sleeps in the southern hemisphere – but on the same bed!

Everything in the room was built to showcase the man’s penchant for lavishness. While taking a bath is meant to be a private affair, it beats logic to that Khashoggi built a bathtub that could accommodate two people, never mind that the Mistress bedroom had its own facilities as well. Bedrooms aside, the dining area has its share of opulence. Another peculiar feature is the boat-shaped basket that is connected to a pulley system. While it would be used to drop foodstuffs, it was also said to convey Khashogi’s beauties, some of whom would be flown in from other parts of the world.

It is in this room that Khashoggi entertained notable dignitaries, including Israel’s Ariel Sharon and Sudan’s Jafar Numeiry.

It was also in this room that the three struck a deal to airlift 14,000 Ethiopian Jews from Sudan to Israel during the famine caused by the Ethiopian civil war, a move that infuriated the then Palestinian leader, Yasser Arafat.

In the late 1980s, his huge business empire began to crumble like a house of cards. He would lose Ol Pejeta House to Lonrho’s “Tiny” Rowland. Today, the house is run by Serena Hotels. Adnan Khashoggi's bedroom, one of the biggest in the world at Ol Pejeta House

Shortly after his death on June 6, his body was buried in an unmarked grave in the holy city of Medina, an anticlimax for a man who once described himself as the richest man on earth. Consumers will enjoy marginal reprieve at the pump after the Energy Regulatory Commission (ERC) announced a reduction in the price of petroleum products.