For decades; invention, innovation and technological advancement have been largely tied to State machinery.

In many cases, all the three dimensions have thrived under intelligence and warfare conditions as governments multiply budgets for military and defence ministries adopting the latest technologies.

Throughout history, innovations including ICT technologies have thrived alongside global situations and world wars.

Space exploration and development has over the ages not only thrived amidst conflict but has been tied to the hip with warfare and warfare like conditions.

One, however, has to go back more than 30 years ago to appreciate this dimension of space exploration and interest.

To date, space exploration has hit heights albeit with international hostilities, fear, intimidation and even paranoia.

For instance, as per reports, when the former Soviet Union (USSR) and the United States differed on policy in the aftermath of the 1947 Second World War, this set the then president for suspicion, competition and in some instances proxy wars as was the case in Cuba and Vietnam.

Spaceflight capability was also at the centre of this tension which virtually split up the world in two.

In bare-knuckle fashion, both the United States and the USSR battled each other for supremacy high above the rest of us to end with remarkable fetes in space exploration and the accompanying technologies.

Soviet’s Cosmonaut Yuri Gagarin became the first human on a space flight in 1961, this fete would however be eclipsed in July of 1969 when the Apollo 11 mission landed the first humans on the lunar surface.

Deemed as the single event designating the winner of the space race, the landing of man on the moon brought space exploration to the fore while astronauts like Neil Armstrong became household names as the ‘fight’ captivated masses in both rival camps.

Earlier on in 1958, US President Dwight Eisenhower signed a public order creating the National Aeronautics Space Administration (NASA), a key federal agency dedicated to space exploration to this very day.

In 1991, the USSR crumbled to pieces in an internal disintegration, effectively bringing to an end the more than three decades space race and the birth of a softer Russian Federation.

The same moment marked the end of the hay days for space exploration as rivalry turned to collaboration - including the joint development of the International Space Station (ISS).

Years later, space exploration has slowly waned into the background with the US government for instance slashing spending to programs alongside aerospace accidents with catastrophic outcomes and the retirement of the maverick space shuttle.

The slow degeneration of space exploration, however, seems to have reached its ends as the industry sees new impetus.

The new era of space exploration is not characterized by sovereigns and taxpayer-backed funding as the private sector now seeks a piece of the action.

Aerospace manufacturer SpaceX has been one such revelation and its goal revolve around the colonization of Mars in the near term and cost-effectiveness in the development of space technologies.

Founded in 2002 by billionaire Elon Musk, SpaceX is already the front runner in space exploration by private entities beating its closest rivals by miles in the marathon to outer space.

SpaceX has been the first private company to successfully launch, orbit and recover a spacecraft.

In the most recent, the company has both sent craft and astronauts to the ISS. By going to Mars, Musk says it shall be the furthest that life has travelled.

In March last year, Musk and company market the first crewed launch from the US in more than nine years.

Today, SpaceX has a 29 billion dollars contract with NASA to develop the first commercial lender which will put the next American astronauts on the moon, including the first woman.

The flight path for SpaceX has, however, experienced turbulence with both the company and Elon Musk going through tough times.

Between 2006 and 2008 for instance, the company marked three failures at rocket launch which put pressure on the company plans.

Musk was forced to split $30 million between SpaceX and his automobile company Tesla before subsequent successful missions and eventual deals from NASA.

Earlier this month, British billionaire Richard Branson became the first person in history to successfully test his spacecraft as he flew close to the end of space.

This coming in just under a fortnight to another billionaire’s maiden space flight. Unlike SpaceX, Branson and his space exploration company Virgin Galactic have an eye on space tourism with Branson’s experience being taunted at the private astronaut experience.

Branson targets to create the first commercial spaceline sub-orbital flights with the flights commencing in 2022.

A ticket for the experience will start from $250,000 or Ksh.27 million in local terms. Just like Musk, Branson has had his moments of adversary including the death of three contractors killed during a test in 2007 and the death of a pilot in 2014 when a Galactic craft broke into parts mid-flight.

Billionaire Jeff Bezos is set to fly out to the edge of space before the end of July on his most secret project Blue Origin.

The company targets passenger flights to space with Bezos being on the inaugural flight. Bezos has mostly funded the project out of pocket to this point.

Private money including the three billionaires and more is now set to take centre stage in the exploration of space and will likely determine the pace and efficiency of space exploration.

While many argue space exploration is the burning of stacks of cash that would otherwise be used in resolving ‘earthly; challenges, human’s ventures into space will remain a key pillar.

From the feasibility of a second home for man and new commercial opportunities, humankind have more to reap from space than is comprehendible by most.

Already, developments in space satellites have improved the quality of life on earth including the ability to pre-empt weather patterns and high-speed internet connectivity and communication.

If anything, humans are now universal beings with the cosmos being out there for us to reap and conquer.

The near future looks worrying, with everyone going through a global pandemic recession but the new digital technologies and space travel innovations remain an interesting commercial opportunity both for the public and private sectors. 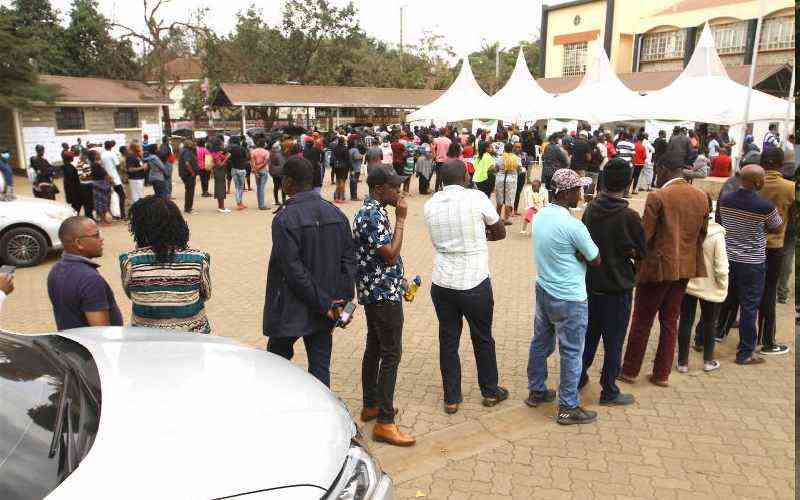 By John Wahome 27 days ago
Opinion
President Ruto has a chance to take Kenyans to Raila's Canaan
.