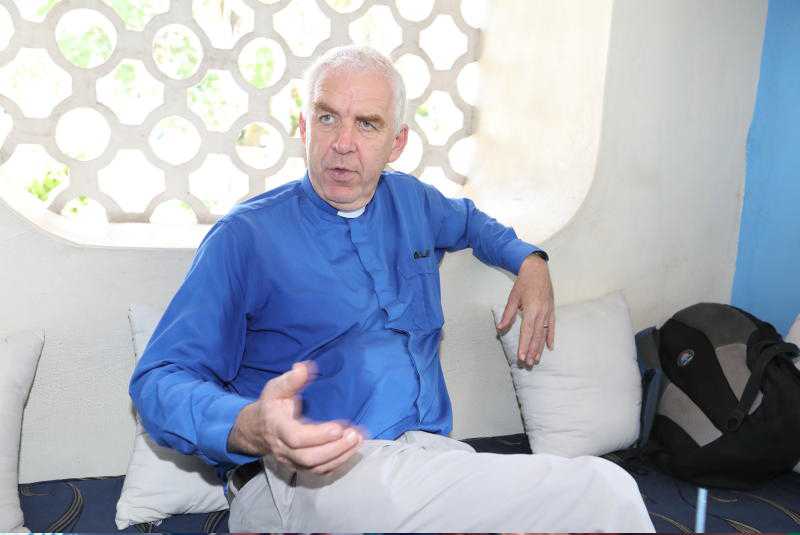 Global seafaring is changing fast with efficiencies at major ports of the world becoming the norm,visiting Global Secretary General of the Missions to Seafarers , Rev Canon Andrew Wright (pictured) has disclosed.

The Mission to Seafarers is a christian welfare charity serving merchant mariners and crews the world over .

It was founded in 1856 and was formerly called the Missions to Seamen. It serves in over 200 global world ports and in 50 nations.

In an exclusive interview with The Standard at the Missions to Seafarers,Mombasa , Rev Wright commended the Mombasa centre for the excellent work they have been doing over the years.

Canon Wright said that ship's turnaround at several Ports of call are quicker and that despite having some bigger ships , crews remained small.

'' By 2021, the Mombasa Centre will be celebrating 100 years since its inception. We salute past and present office bearers here who have endeared themselves to serving the seafaring community either in distress and those coming ashore to unwind,'' Wright said.

He singled out for mention the current Mombasa chaplain Rev Moses Muli as one person who has shown dedication in his service to seafaring fraternity.

Canon Wright said that the Mombasa Seafarers Centre is set to undergo massive upgrade to cope with work as it lies in one of the busiest Ports in the Western Indian Ocean rim.

He said that top on the agenda for the charity organisation was the development of seafarers famly support network  particularly in areas where large maritime labour comes from.

'' These are nations like the Philippines, Myanmar and India respectively,'' the SG  said.

Canon Wright said that in neighbouring Tanzania's commercial capital of Dar Es Salaam, a new headquarter building is under construction to offer services to mariners who call at the Port.

Other new places where the global mariners charity organisation has set foot according to the SG include Turkey, Argentina and the Panama.

'' In these areas we seek to continue providing  financial , legal and medical support to seafarers famillies,'' he said.

And speaking on piracy menace along the Somali Coastline, Canon Wright said that there was considerable progress on tackling the issue of piracy following the deployment of international naval ships and own ship armed security .

'' Any attempt to withdraw the naval patrols will lead to resurgence of piracy attacks,'' he said.

He was, however quick to point that despite a lull in piracy activities off  Africa's longest Coastline  of Somalia, the situation was getting bad off the Gulf of Guinea in West  Africa.

'' It is a concern. It is frightening  for both the seafarers and the maritime sector when pirates attack and take hostage vessel and crew. There has to be concerted efforts to put an end to pirate attacks all over the world to allow for maritime trade to flourish,'' he said.