NAIROBI, KENYA: The government has partially lifted the ban on logging in public and community forests.

In a statement, Cabinet Secretary Ministry of Environment Keriako Tobiko said the move is to allow for harvesting and disposal of mature and over-mature forest plantations for an area not exceeding 5000 hectares.

“Having considered the recommendations of both the Board of Management of Kenya Forest Service and multi-agency on mapping, verification, and valuation of mature and over-mature forest plantations, the government has decided that the Moratorium on logging in public and community forests shall continue but varied and or modified to allow for harvesting and disposal of mature forest plantations,” said Tobiko.

He said the harvesting and disposal shall be oversighted by a multi-agency team and done in a manner that is open, transparent, and accountable and ensure value for money.

The government imposed a moratorium on logging in public and community forests in 2018. The moratorium drew criticism from saw millers and timber products merchants who complained the ban had caused massive job losses.

Last year the government extended the ban to a year further slowing the activities of Sawmillers across the country.
Since the ban on logging and extraction of timber in all public and community forests came into effect, wood has been scarce, causing a ripple effect on the construction industry.

Prices of the now-scarce timber have skyrocketed with industry players saying it could go higher if the ban is not lifted. 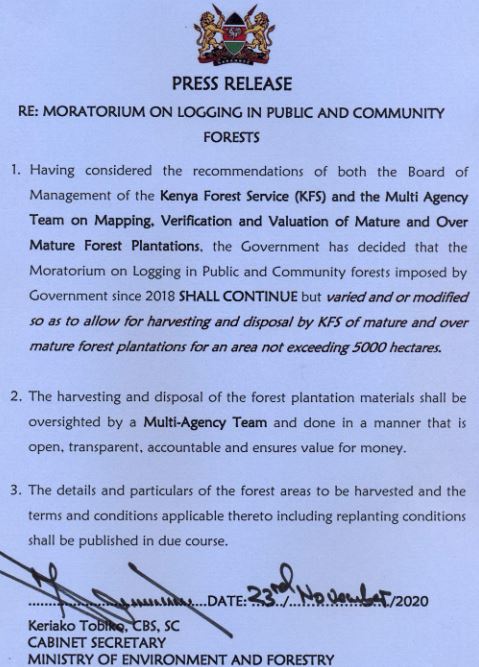 Meanwhile, Kenya requires Sh48b to raise forest cover to 10 per cent by 2022 from the current seven per cent
Acting Conservation Secretary Alfred Gichu said to achieve this strategy, the demand gap for wood must first be bridged.

“The 15 million cubic metre gap must be met to achieve the 10 per cent forest cover,” Gichu said. "To bridge the gap, we must put in place interventions such as additional tree planting across all available landscapes."

Counties that have achieved more than 20 per cent forest cover include Nyeri with 38 per cent; the highest so far, Elgeyo Marakwet (37.5), Lamu is at 34 per cent while Kericho has 24 per cent.

“If the proposed interventions are not implemented, the consequences will manifest in the form of reduced supply of important products, droughts, and loss in ecological services,” said Gichu.

Proposed interventions include planting and protecting two billion tree seedlings in the next two years.

Ministry of Environment and Forestry Principal Secretary Chris Kiptoo said the strategy has been hard to implement as Treasury has not been able to offer the required support.

“However, with the little we have been given, we are partnering with the private sector,” said Kiptoo.