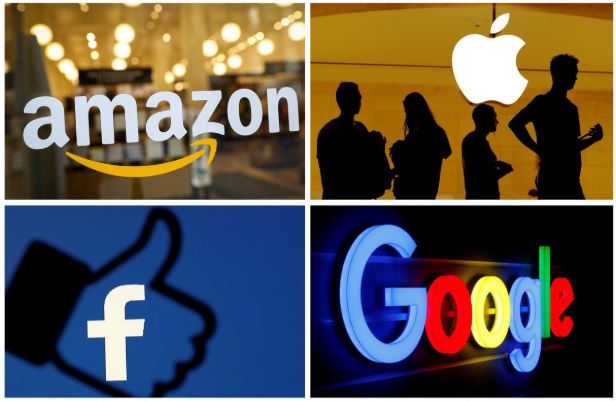 The chief executives of four of the world’s largest tech companies, Amazon.com Inc, Facebook Inc, Apple and Alphabet’s Google, plan to argue in a congressional hearing on antitrust on Wednesday that they face intense competition from each other and from other rivals.

The testimony from Amazon’s Jeff Bezos, Facebook’s Mark Zuckerberg, Google’s Sundar Pichai and Apple’s Tim Cook, which was released Tuesday, portrays four chief executives who are looking over their shoulders at competitors who could render them obsolete.

Pichai argued that search - which Google dominates by most metrics - was broader than just typing a query into Google, and said he remained concerned about being relevant as people turn to Twitter, Pinterest or other websites for information.

“We know Google’s continued success is not guaranteed. Google operates in highly competitive and dynamic global markets, in which prices are free or falling, and products are constantly improving,” Pichai said in the prepared remarks.

The four will testify to a panel of lawmakers investigating how their business practices and data gathering have hurt smaller rivals as they seek to retain their dominance, or expand.

In his remarks, Bezos said Amazon occupies a small share of the overall retail market and competes with retailers like Walmart, which is twice its size. He also said the coronavirus pandemic boosted e-commerce businesses across the spectrum and not just Amazon.

Bezos also lays out how small sellers have succeeded on Amazon’s third-party marketplace, a practice that has come under scrutiny from lawmakers.

In his prepared testimony, Zuckerberg argued that Facebook competes against other companies appearing at the hearing and against others globally.

He will also remind lawmakers of the competitive threat U.S. tech companies face from China, saying that China is building its “own version of the internet focused on very different ideas, and they are exporting their vision to other countries.”

Zuckerberg also renewed Facebook’s call for government regulation. He has previously called for more laws in areas where the company has been criticized - such as harmful content in social media, election integrity and privacy.

Apple’s Tim Cook will tell the committee the company “does not have a dominant market share in any market where we do business. That is not just true for iPhone, it is true for any product category.”

He will argue the company’s “commissions are comparable to or lower than commissions charged by the majority of our competitors. And they are vastly lower than the 50 to 70 percent that software developers paid to distribute their work before we launched the App Store.”

Global shocks push more than 1.4 million Kenyans into poverty
Business
By Moses Omusolo
9 hours ago
Pump prices unchanged as State ups subsidy
Business
By Macharia Kamau
12 hours ago
World Bank seeks review of Kenya healthcare financing
Business
By Graham Kajilwa
1 day ago
Elections should not cause unease, economic uncertainty
Opinion
By Tobias Alando
1 day ago
Interact and socialise beyond work; you need it
Business
By Peter Theuri
1 day ago
.