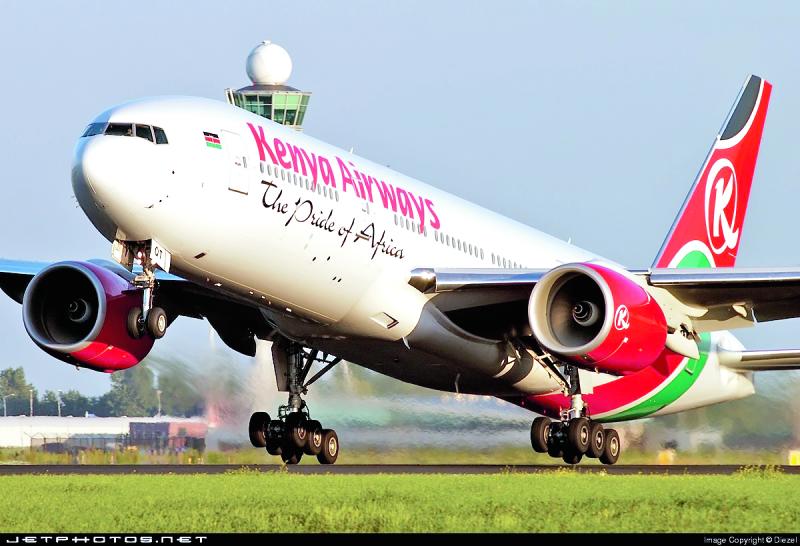 These are the factors cash-trapped national carrier Kenya Airways is blaming for its woes.

A candid prognosis by Kenya Airways management contained in a report handed to National Assembly Transport Committee chaired by Pokot South MP David Pkosing shows an airline on the verge of collapse.

The report shows that the carrier that was once the leading airline in the continent, was hurtling down the path to bankruptcy due to daily loses running into millions of shillings. The management blamed this on poor decisions made in the past.

Volatile fuel prices in the global market, costs of staff (in particular cockpit and cabin crew), fleet ownership leases, finance costs, landing and navigation costs, distribution costs were highlighted as the other reasons for KQ’s fall from grace.

A captain at the carrier takes home Sh1.6 million monthly, making KQ’s pilots some of the highest paid globally.

“A KQ Captain earns on average 11 times more than average employee in other high salary sectors and 29 more than the private sector average. Unfortunately, the pilots’ remuneration is not in line with their productivity,” reads a document by the KQ management.

While significant salaries of the pilots are not unusual in the airline industry, KQ chief Executive Officer Sebastian Micosz says “very influential” trade unions and political pressure have made salaries payable to its pilots relatively high compared to their counterparts from wealthy airlines.

Kenya Airways, which has been caught up in a controversial bid to take up control of the Kenya Airport Authority (KAA) to boost its dwindling fortunes, also highlighted perennial industrial actions by its staff in pursuit of higher pay as part of their woes.

But it is the leasing of the aircraft that has come to haunt the carrier. Mikosz highlighted one particular instance in which the airline loses Sh200 million every month for the hiring of three Boeing 777-300 (ER)s wide body planes that were lying idle.

The three planes and two Boeing 737-800s had been sub-leased to Oman Air and Turkish Airlines.

“We made a mistake on the Sh100 billion leasing deal. The B777- 300 (ER)s was particularly a big blunder, its costs us Sh200 million every month to maintain each one of them,” said Micosz.

But worst still, the management of Kenya Airways -- which made Sh4 billion in half year losses in 2018 -- complained of the high overheads in landing fees. For instance, every time a KQ plane lands in a foreign airport, what it pays in charges help lower the costs of competing carriers through fuel distribution costs, handling services, maintenance and other services.

But when competitor’s plane lands in Nairobi, very limited stream of income goes to Kenya Airways as KAA and all the airport suppliers are not linked to KQ through any equity or exclusivity contracts.

Notably, unlike its competitors, KQ gets no preferential treatment in its own hub of operation, even though it is responsible for around 50–60 percent of overall traffic at JKIA.

“Considering this, KQ will never be as competitive as other airlines and will continue to lose market share and generate losses,” reads the report.

KQ has argued that in Ethiopia and Egypt models, the holding companies benefited from airport infrastructure, fleet expansion, new destinations, partnerships and acquisitions and marketing and traffic growth.

In the document, KQ management also identified the opening of Kenya’s airspace to the other African countries through the single African Air Transport Market in 2015 as a disadvantages to the national carrier.

Although the African market has been growing exponentially in the same breath, Mikosz says conditions surrounding Kenya Airways (KQ) and JKIA are alarming.

“Kenyan aviation as a whole continued to lose market share over last couple of years to its competitors. Ethiopian Airlines, which was half the size of KQ in 2010, has grown exponentially in recent years. It has outpaced KQ three times since then,” argues Mikosz in the document to Parliament.

It notes that from 2015 to 2018, all competing carriers in the region increased their market share -- Ethiopian by 20 per cent, Qatar by 12 per cent, and RwandAir by 22 per cent -- while the national carrier lost 4 per cent.

But despite the ‘unfavourable’ external and internal conditions, Kenya Airways generated revenue of Sh52 billion in 2018.

How expressway city traffic mess can be avoided