President William Ruto got down to work on the same day of his inauguration, signing executive orders that appointed Court of Appeal judges.

In the picture shared by his office, Ruto was flanked by his deputy Rigathi Gachagua, as well as former Budalang'i MP Ababu Namwamba and former Cabinet Secretary Davis Chirchir.

While Mr Chirchir is currently serving as Ruto's Chief of Staff and Mr Namwamba as advisor on international relations, the two are among leaders waiting in the wings for formal appointments in the new administration.

Chirchir was appointed Cabinet Secretary (CS) for Energy and Petroleum by President Uhuru Kenyatta in 2013 but was suspended and later sacked alongside three other CSs.

In March, Ruto appointed Chirchir Chief of Staff in the Office of the Deputy President following the death of Ken Osinde.

Another person who has kept his place beside Ruto is Korir Sing’oei, a lawyer who served as Legal Advisor at the Executive Office of the Deputy President.

Having shown eagerness to get down to work, the president is likely to announce his picks for the Cabinet as soon as the end of this week or early next week.

His administration could potentially feature more women in prominent roles, especially in Cabinet as he promised them half the slots.

Other party loyalists who could leave the legislature to join Ruto in the Executive are Garissa Township MP Aden Duale and Elgeyo Marakwet Senator Kipchumba Murkomen.

The duo is reportedly prepared to resign their seats in Parliament to take up Cabinet slots.

Some of those whose appointments in government seem like a matter of when rather than if is ANC party leader Musalia Mudavadi who could make a comeback to the Cabinet after more than a decade and could be set for a bigger reward if elevated to Prime Cabinet Secretary according to a pre-election agreement.

Former Tharaka Nithi Senator Kithure Kindiki could also be set for a senior government position after he was overlooked in favour of DP Gachagua as Ruto's running mate.

Prof Kindiki has been a constant Ruto ally since his trial at International Criminal Court in The Hague where he represented the DP.

The president is also likely to feel inclined to give back to the former senator after he prevailed upon him to drop his bid for Tharaka Nithi governor for a national position.

Former Machakos Governor Alfred Mutua is another one expected to feature. He closed ranks with Ruto earlier this year and helped the Kenya Kwanza campaign in Eastern.

The proximity Dr Mutua has had to the transition process - he was present and on the front line after a meeting between the Committee for the Assumption of Office of the President. He was also at State House on Wednesday during the swearing-in of judges of the Appellate Court.

So too was immediate former National Assembly Speaker Justin Muturi, a Ruto man who was seconded to the transition committee.

Muturi, a former magistrate, could also feature in the government.

As things take shape, Namwamba has come out ahead, potentially for the Foreign Affairs docket, judging by the prominent role he is playing in Ruto's diplomatic engagements.

Since he assumed office, the president has met with a number Heads of State, foreign dignitaries and representatives of the governments of Eswatini, Congo, South Sudan, Somalia, France, Germany, US, Egypt, Algeria. Namwamba was at hand in all those meetings.

Former President Uhuru Kenyatta appointed the former Budalang'i MP the Chief Administrative Secretary at the Ministry of Foreign Affairs on January 26, 2018. In February 2022, he resigned to serve as Ruto’s diaspora chief campaigns officer. 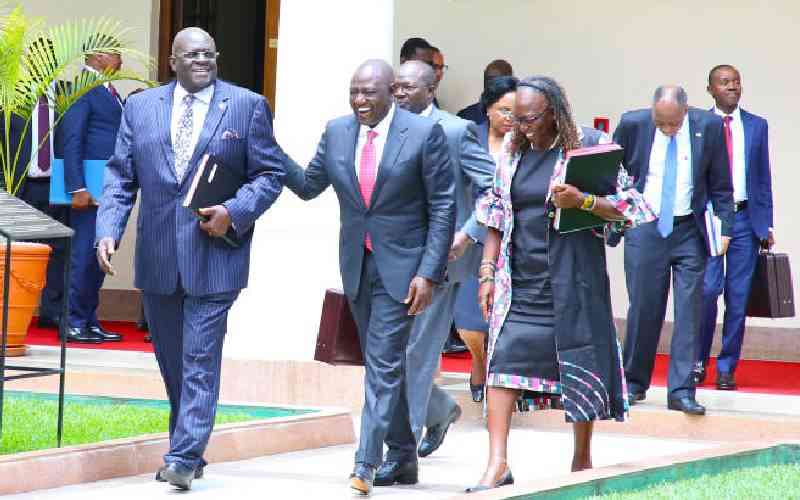 By Mercy Adhiambo 1 hr ago
Premium Inscrutable by choice, Magoha was generous and laughed a lot