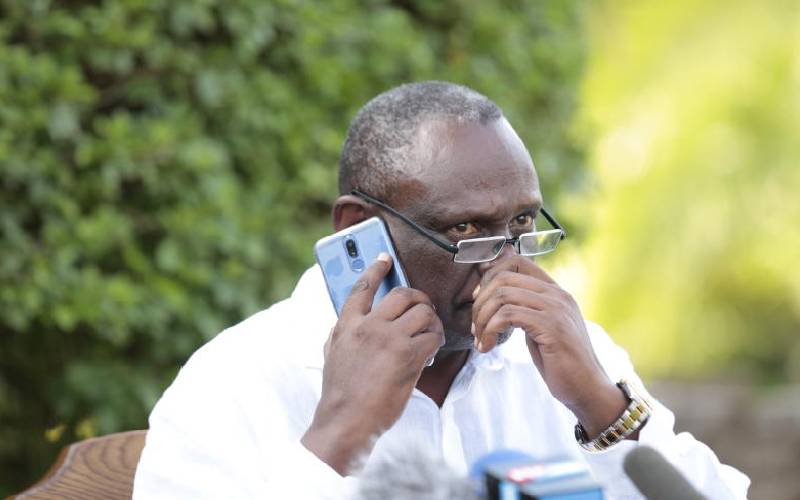 Speaking during an interview on KTN TV on Monday night, Murathe said the changes were a clear indication that the political marriage between President Uhuru Kenyatta and his Deputy William Ruto is over as a result of disrespect by the latter and his allies.

“When you marry a woman, you to take vows and says till death do you part, but when the marriage becomes untenable, you divorce.”

Murathe (pictured) accused Ruto of sitting at his Karen home whipping some senators not to attend his boss’s meeting.

“As the party leader, Secretary-General and the senators were meeting, the DP was busy in his Karen home whipping senators not to attend,” he said.

He termed the changes house cleaning exercise that will proceed to the National Assembly and committees in the two Houses to bring sanity in the party.

“It was coming, some people even felt we were taking too long to deal with impunity, disloyalty, insubordination and insults directed at the party leader,” he said.

Murathe said President Uhuru cannot achieve his Big 4 agenda with a hostile leadership in the Houses.

On whether Jubilee was on his death bed, Murathe said the party was on the right track and was attracting like-minded parties and soon it will be bigger than what it is now.

“Our party is getting better and bigger we are attracting new friends and coalitions just like what we have done with Kanu.”

On their coalition with Kanu, Murathe said what they did was to formalise a pre-election agreement with the independent party before the 2017 General Election which saw Kanu back President Uhuru.

“In fact, we had a pre-election agreement with Kanu in 2017 and Kanu endorsed Uhuru but we didn’t deposit the agreement so have now formalized it,” he added.

Murathe defended the changes saying they are backed by the party constitution which gives the President and the National Management Committee power to enter into a coalition with other political parties and convene a meeting on behalf of NEC respectively.

“They should read the party constitution Article 9(viii) which gives Uhuru power to enter into a coalition with any party without asking anyone.”

He said the party constitution also allows the NMC to convene where in their opinion they the NEC cannot meet and execute the latter’s mandate.

According to Murathe, the NEC was not able to meet due to Coronavirus and the ongoing stringent directives meant to curb the spread of the virus.

He said the changes will be taken before NEC for ratification as per their party constitution.

He dismissed claims by ousted Senate Majority Leader Kipchumba Murkomen and his Majority Whip counterpart Suna Kihika claims that the President had no numbers to effect the changes.

Murkomen had claimed that only 15 senators attended the PG as opposed to 20 that was reported by State House.

Murkomen said 23 senators did not attend the meeting and have written a letter to the Speaker of the Senate to protest the changes.

But Murathe said the party will take the list and signatures of the senators who attended the meeting at State Houses to Senate Speaker Kenneth Lusaka.

He slammed the Tangatanga senators for skipping the meeting even after being invited by President Uhuru himself, something he termed disrespect to the party leader.

“If they are sincere and honest, they will tell each and every Jubilee senator received an SMS from the President himself.”

Supreme Court: In divorce, each person should leave marriage with what they acquired individually
National
By Brian Okoth
32 mins ago
Oga Obinna's farewell to Kamene Goro as she exits KISS FM
News
By Diana Anyango
34 mins ago
US military kills senior Islamic State official in Somalia
America
By AP
41 mins ago
Families demand pay for graves in airstrip project
Western
By Benard Lusigi
1 hr ago
.